the Iceking’s Tools addon, choose sculpt mesh then retopo mesh to establish link by pushing shrink update button. setting up retopo mesh will automatically establish link. just a few shortcut macros i like to use. cheers. designed so working with bsurfaces and looptools while retopoing would be faster. https://raw.githubusercontent.com/iceking11/Ice-Tools/master/ice_tools.py 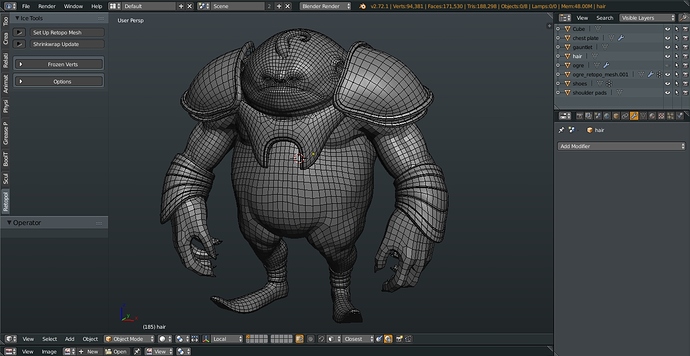 wow! those shortcut macros are blissful ones.
especially polysculpt and the Shrinkwrap Update button.

options for remesh and smooth are in F6

Thx for the addon

for the sculpt smooth, it will be possible to not smooth the border vertex ?

I think, you can add some options like Xray and Hidden wire when launching the setup retopo.

Great tool, i agree that setting xray + hidden wire automatically when you setup a mesh to be the retopo mesh would be be good addition, sure only a little gain of time as you can do it manually, but still a gain of time

the smooth was designed simply for a solid sculpt mesh or to smooth the resulting dyntopo res-up mesh, as for the x-ray and hidden wire, maybe in a few days, but the thing in hidden wire is = you cannot see flipped normals, you cannot detect holes (especially one missing face) i never use it. so x-ray maybe

these are pretty light stuff, and will probably take me a minute of coding, but its way past my bed time lol actually its 2 am here and i gots to sleep, so gotta consider all your suggestions and work on it tomorrow night.

@icehing
thanks bro i was awaiting for this…:yes:
@pitiwazou
for smooth without deforming border you can use EWOC tools collection " laprelax " [ relax the surface and reorganize polygon and not deform the border ]

No problem for hidden wire, it’s just a click in the N panel after setting Xray, i simply can’t go back to the time before Hidden Wire was added to Blender, it has made all my retopo session so much more comfortable than what it used to be before

I agree on Laprelax, it is an excellent tool , i’ve been using it a lot during my modelling
Though modelling does not deal with the kind of polycount a sculpt will have, so i can’t comment on its use with sculpts.

I use my shading menu for Xray and Hidden wire, it’s just that everyone work differently and it’s good to have some possibilities like that directly in the addon.

Ok for the sculpt smooth

I made a little video of the addon for my french camarade and I put your addon in a retopo tab vith the bsurface and contour tool.

I don’t have found the shortcut to tu bsurface “add surface”, you have add one with the right clic> add shortcut ?

@@pitiwazou Hey, that looks great. It’s a pity that you advertised your Auto Mirror addon only in French though, I’m sure the rest of the world would also find it useful : )

@@iceking Very useful. Could you maybe add the GPL notice to your addon? I would gladly use parts of it, if that’s ok with you.

Automiror has made by a friend of mine on blenderlounge. I will tell him to post the script here ; )
http://blenderlounge.fr/forum/viewtopic.php?f=26&t=589 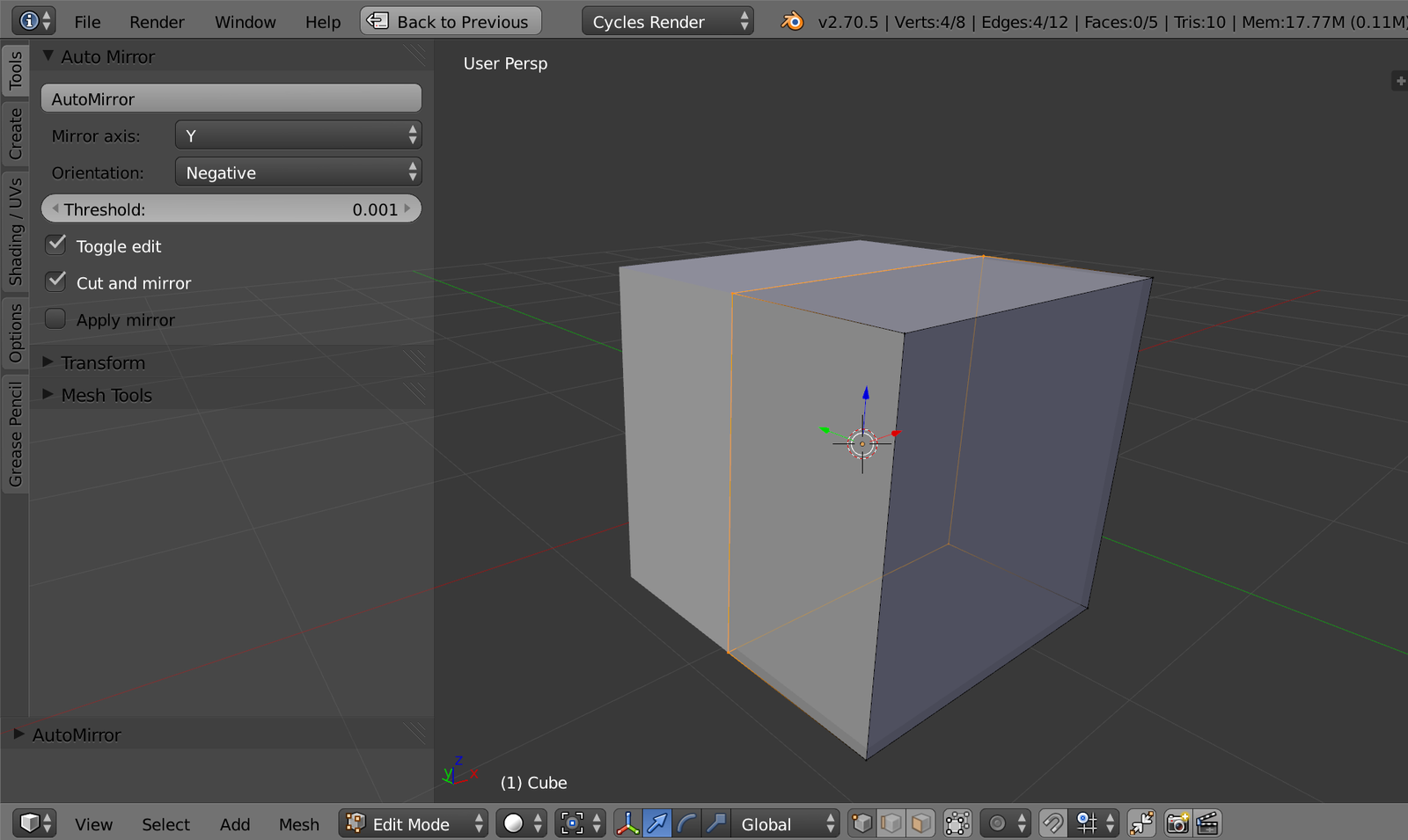 It is really usefull ^^
For a video, I don’t speak very well english and my accent is really bad ^^

Really great addon iceking, I will use it every days for my retopology work ; )

@Plyczkowski: yeah sure bro, know though that i have vultured some of Piotrs code for the remesh button, (he’s the godfather of sculpt ui),

so guys, be sure to promote Sculpt UI too in videos, because that was my Rosetta Stone in understanding python because i hate coding and it just became necessary so i did try it out.

i will add hidden wire and x ray and use of smooth button in edit mode (protecting borders) soon. also a reset button on the base values regarding the undo options when remeshing and smoothing.

will be in touch, gotta sculpt.

my shortcut for generate surfaces (grease pencil) is Shift+Q, my shrinkwrap update is Shift+Alt+Q, all manually edited. no hardcoded stuff for the addon, avoiding key conflicts.

I would recommend to use github.com to store your sources.
Also Pycharm IDE is better to use for development.

iceking, Thanks on sharing the script! I’ll try this soon. looks very useful.
pitiwazou, That’s a great blender re-topo overview vid, shame I don’t understand French. By the way I see you also mostly use bSurfaces with the ‘Follow’ setting on 1. You can make it default. search for this string in the ‘mesh_bsurfaces.py’:
self.edges_V = 3
change 3 to 1

I’m intrigued, do either of you guys use blender default RMB paradigm?
In case you don’t maybe we can start a thread with LMB customization in hopes that once we get the best of everyones setup, we can cannibalize the lot and create a good LMB starting point.

Thx OrAngE for the tip of the Bsurface ^^

It will be great to have a pop up, so Maybe I can add a code to show automatically the F6 popup to change the setup when I press Add surface ^^

It’s a video, so it’s not difficult to understand I think ^^

To work with Iceking’s Addon and my other retopo addon, I have made a special Tab with the tools I use all the time.

Sorry, still not in english.

There are two tutorials I know of that will help you, one in French and one in English:

wow, pitiwazou you really got that retopology tab prepped out hehehe

I made it after you posted your Addon ^^

I dont’ know if it is possible on Blender, I hope, but it will be really usefull to have the possibility to create faces like in topogun.
You can see what I talk at 1 minute 51 seconds.

F2 is great, I love it, but sometimes, you want to place the new vertice yourself, so the topogun solution is great.

Also, is it possible to keep the swhrinkwrap active in sculpt mod ?