If an image is too big, can you divide a render into several parts?

Hi all,
I’m trying to render an image that’s too wide (3360px) and I’m running out of memory.
Is there a way to render only parts of the final image and assemble them in Photoshop?
(I know there’s a Python script out there for this but I’m afraid it’s beyond my skills)
Thanks 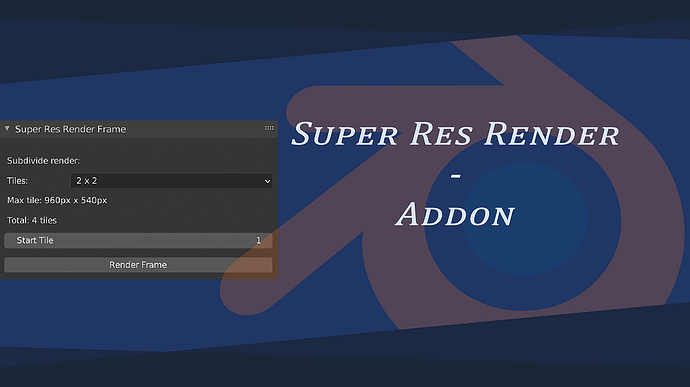 Super Res Render allows you to render in extreme resolutions!When you want to render a poster, you need to render at ultra resolutions like 12k or even 64k. But often you lack the system memory to do so, and blender will crash!This add-on works by...

This will work for Cycles. For Eevee, even if the addon says it is supported, it is very likely that you will get inconsistencies between tiles because things in Eevee depend on screen/camera space.

I’m using Cycles.
Oh you can’t try it before deciding what you want to pay for it?
Are you a user or the developer?

If you don’t want to make a donation to the developer then you just fill with 0 in the field.

I don’t know if this will help but recent versions of Cycles use tiles differently. Now tiling is a feature to reduce memory use when rendering large images.

Unfortunately it doesn’t work at all.

You can’t download the addon, or are you having trouble using the addon?

I had this same problem a few days ago. Although mine was a time limitation not exactly a memory issue.
The best solution I found was to enable the rule of thirds in the camera viewport and then use Ctrl+B to select around one of the squares. This will give a total of 9 different renders. Although if your just having memory limitations I think you can just increase the tile size. (not sure about this)
If someone has a better solution I would also appreciate it! (anyway in python would work for me, maybe)

I’ve installed it, but clicking on render frame opens a render window but doesn’t start rendering.
Much like when I try to render the usual way.
There might be a problem with that file, I’ll try with a new one

Here’s a quick addon I built to automatically select portions of the image to render.
Tile Render.py (4.2 KB)
It’s very rough and not super customizable but it does work. Although I didn’t notice a significant decrease in memory usage, only render time. But you’ll have to test.
Because it’s just a beta test you do have to save each image and move to the next tile after each render.
It tiles in a 3x3 grid. These are the images it will select.

If anyone here knows how to expose the tilesX and tilesY variables in the UI let me know.

Thanks.
I’ll try out your addon, but for the time being I’ve just divided the image to avoid the problem.

Here is the mostly finished addon Tile Render. Available for Blender 2.79 and 2.8+. [Tile Render] Tile Render_2.79.py (11.6 KB) Tile Render_2.8+.py (11.3 KB) Tile Render allows you to render a single frame in a grid of multiple images. This is great if you have a cheesy laptop and you want to render something over the course of a week instead of 24 straight hours. You can then combine them in another piece of software such as GIMP or Photoshop. You can setup a grid with 1-10,000 tiles. Thou…

The box noted below is not checked for usual rendering in Blender versions after Cycles-X.

Blender 3.2
Render Properties → Performance → Use Tiling
The documentation says the tiles are saved to disk and that this is for rendering large images.

On the render tab the image rendered in tiles left to right, bottom to top. Then the image disappeared briefly while the status said it was assembling the final image. The image then reappeared.

If done with denoise then resource use is high after the tiles render and before image assembly. Tiling probably does not help with denoising and for a large image will take much time, CPU, and RAM. Probably best to render a large image without denoise and do that in post processing in a photo editor.