Is there a way to do a inner bevel on a letter?

Hello !
I really need help :‘) I need to engrave for a project a text into a cube shape. But the big thing is that I need an inner bevel in the text, not bevel on outer edges, but a bevel into it that follows the middle of the letter. And I tried many things, impossible to obtain something like this, even with other softwares, I don’t see any solution I’m lost :’) 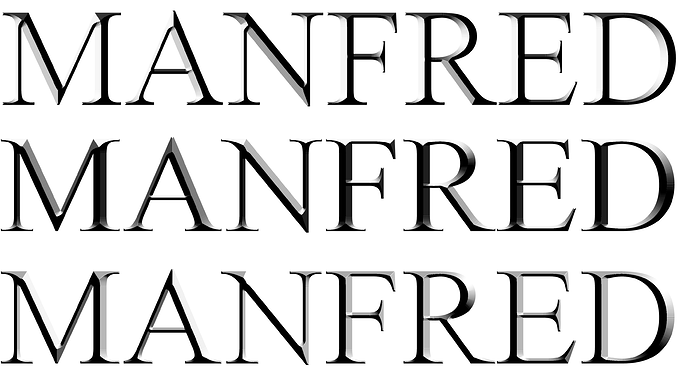 Here is what I want, I did this with Photoshop with few clicks, it makes me crazy not to be able to have this easily on Blender !
Thousands of THANK YOU for your help

Yeah, chiseled text is complicated in Blender – I mean, it makes sense because you’re dealing with a 3D object instead of just some pixels on a raster screen, which are much more easily manipulated, but I can see why that might come as a bit of a shock. And it’s a pain because one usually needs to do it for each letter individually.

You can play around with the Offset and the Bevel in the Data Object Properties of the text, but I’ve not gotten good results with that for anything extreme, like a single raised centre line. Even if one can get the line itself, the process produces mangled topology at sharp corners and end points. Instead you’re better off converting to mesh, and then doing it manually, even though that adds a lot of work.

Hi, how can I push text sharply at center like H in this metal text, cast like? [image] I am trying to do the same with D [image] But unable to select the flat face or push the centre line by middle. This is what I have now. [image]

Come to think of it, doesn’t Photoshop have 3D features? I haven’t used it in ages, but CS6 had something like that. It might be easier to do this in Photoshop and export the 3D model.

If you can get what you want in photoshop quickly, then use your photoshop image as a displacement map. It’ll be wayyyyyy faster than doing this in Blender, as noted

If you have very thin letters you can easily do it the other way around with some Alt S to fatten the mesh, but I guess you want to shrink letters, which is not easy because most of the time the faces will quickly overlap