It's been a crazy 3 months!

First off, I want to say thank you to the Blender Foundation and the Blender community.
After watching Netflix’s Next Gen and finding out that Blender is a free program, transitioning my film from 2D animation to 3D has been a non-stop training session. I literally mean non-stop :P. If I’m not working, I’m behind the computer, minus the hour a week I allow for Game of Thrones

After countless nights looking up and seeing that’s it’s 3:00 AM… I’ve got one set and one main character modeled; she’s rigged, weight painted, added a few physic sims, and animated most of a three minute dance scene I’ll use in the slightly longer promotional short.

When you’re really struggling to get your screenplay made in the live action world, having to rewrite or remove parts of the story to fit a certain budget, finding Blender is like a producer calling you up and saying, “I’ll fund your film… unlimited budget!” The only thing you’ll have to pay is time, ungodly amounts of time. LOL

Here is one of the sets. I know I can’t use “photo realism” for an animation (3 hour render), but I just wanted to test my skills as a cinematographer and light for realism.
I know it’s not on the level of what you guys do here on the regular, but I wanted to share for the first time, and to stir up some attention for the film. In the future I hope to surround myself with talented artist like the ones on this site, and get back to focusing on the storytelling.

Again… Blender, seriously I can’t thank you enough. And you have a new member to the Blender Foundation fund. 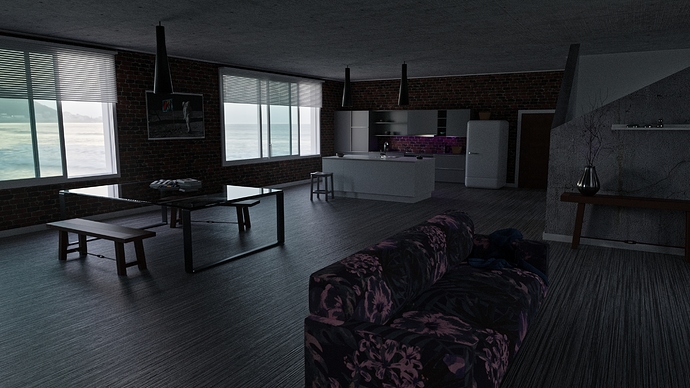 It looks excellent. I love the lighting. You should take a look at Blender 2.8 and EEVEE. It makes rendering animations somewhat feasible in many cases.

Thank you!
I’ve been working in 2.8 exclusively, I haven’t even downloaded 2.79
I’ve given EEVEE a go a couple of times for final renders, and the speed has been great. But setting up lights in EEVEE doesn’t seem to be as intuitive as Cycles, and shadows seem to go missing with certain objects.

Cycles tends to be more like I’m lighting a set in real life; “spot” acts like a spot (set up here, point there, and adjust intensity) “areas” act like my large or small soft lights, etc, etc.
I very well maybe missing a toggles or more to make EEVEE work like Cycles, but as right now I’ve just steered away when it comes to final renders.
Since the film’s look won’t be for “realism” EEVEE maybe the way to go, so I’ll start studying this part of Blender. Thanks for the advice.
So much to learn!

The post linked below has some good info on getting Cycles interiors to work in EEVEE and contains links to further relevant posts.

Classroom Benchmark from Cycles to Eevee Tutorials, Tips and Tricks

I will describe my general process in converting Cycles scenes into Eevee. Here are my main tips that I use to get started: For proper setting for shadows see link on Light Leaks. Lighting workflow see HDR lighting. Multiple or nested IRVs see link on Nested IRVs. Do a Cycles render pay close attention to the lighting specially the shadows. Shadows can be sometimes difficult to create accurately in Eevee but are critical for realistic rendering. Lastly material differences like glas…

Thanks for this link. These are exactly the areas that I’m struggling with while working with EEVEE.
I’ll dig into it.