After a long pause (regrettably, I have started uni and am rowing for my college, so I haven’t had much spare time in the past 3 months) I decided to get back to blender, and lacking originality, to my favourite topic: medieval stuff - I study medieval history by the way, that’s why I am so tedious and obsessed with such things.

Here is a new medieval house I am still working on. As you will see, lot of work is still to be done, though I wanted to share with you what my building looks like so far.

A few information before the images: the type of house is a timber-framed house, typical of places such as England, Northern France and Germany, seen the huge availability of timber in those northern European regions.
This house was relatively cheap and fast to build: a timber frame was set up and the spaces in-between covered with wattle. Since space in towns was often limited, for many medieval houses were literally built on ancient Roman streets (by closing their passage - that’s why many towns of Roman origins lost their original rectangular grid), builders gained more space by extending upper storeys which hanged over the streets. Although timber-framed houses were more common in Northern Europe, as stated above, over-hanging storeys were to be found almost everywhere in Medieval Europe, as shown by the reference images shown below.
Many medieval towns forbade the use of thatched roofs for the high inflammability of straw; thus, wooden tiles started to be use almost everywhere in medieval English towns by the 13th century.
Finally, for chimneys were expensive (stone or bricks - often unavailable in Northern Europe until the end of the middle ages, only castles and churches were built of stone. Bricks were commonly used in Italy, for there had been a long going tradition of bricks production), heating was provided by a hearth in the main room, and smoke was let out through a whole in the roof. Windows were big enough to let light in and small enough to keep the cold out, and were shuttered at night by wooden panels which were in the inside (not outside like today!). Needless to say, glazed windows were to be found in Cathedrals and rich houses, and became widely used by the end of the 15th century.

The three human figures were included to give an idea of proportions: they are 1.72 cm tall (5’3"), average height in medieval England. The upper storey is smaller than the ground floor.

Blender Info: 422 faces, textures made in PS by myveryself.

2 and 3) Medieval Houses in Bologna, Italy 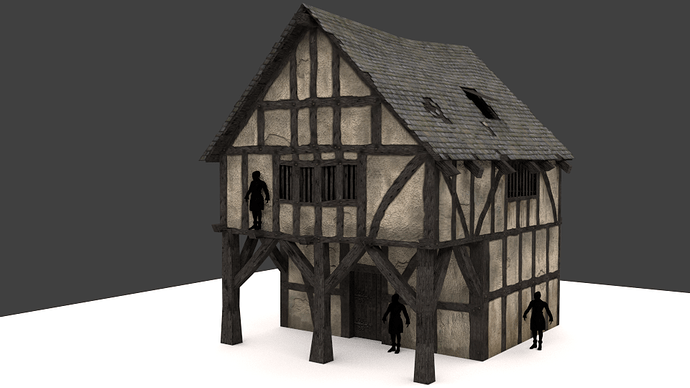 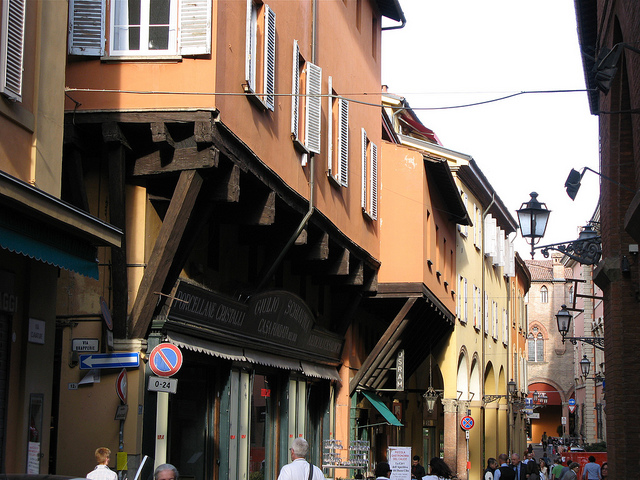 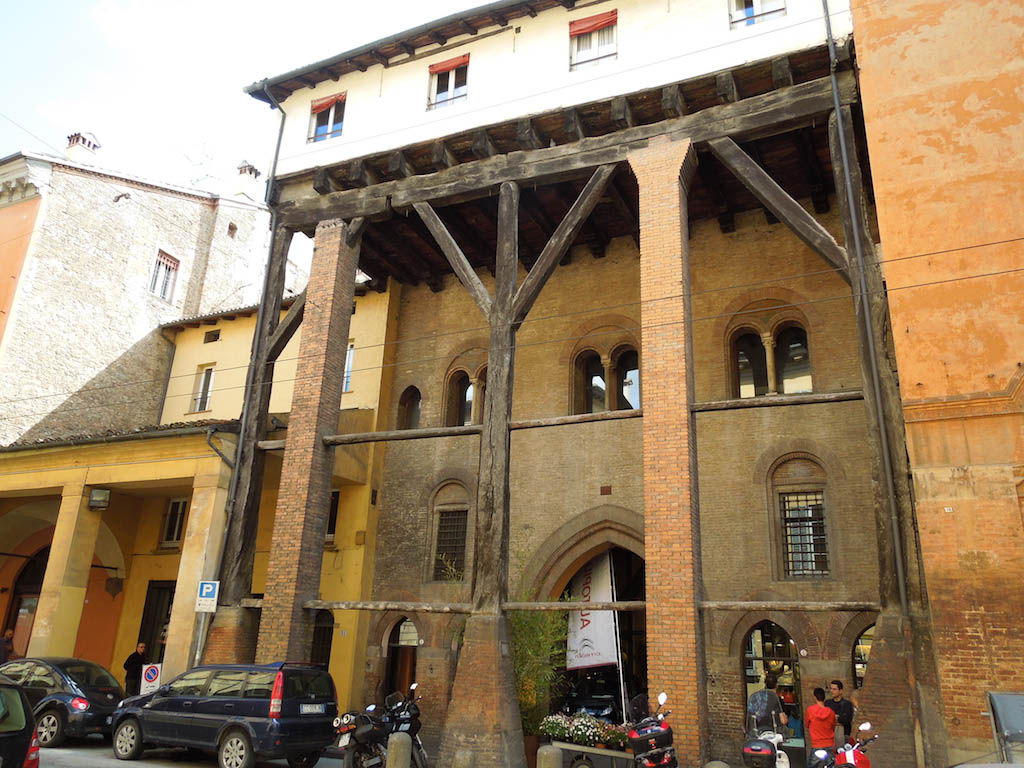 The wooden supports on the front look a little sharp, but the description does say its low poly.

I really like this one.
The details on the roof are good and the texturing overall but it seems a bit flat on the wall (I cant notice the difference between the wall and the woods) Its a good start though.
I`d like to see a whole city like this.
Keep it up.

Thanks for the positive comments guys, really appreciated them! It is indeed a low poly, 422 faces in total, but I shall smooth off those beams a bit! And I am trying to work out how to use displacement maps in cycles… I have the grayscale map but don’t know how to combine it with nodes, or at least how to give it a bump out effect. The reason why it still looks a bit flat is because it is in fact flat

I gave it shadows in PS but it’s not enough to trick human eyes! And the idea is to create other houses and compose a scene…

Unfortunately I have gotten back to rowing, and my hands are suffering from a tremendous amount of blisters, so that I’ll have to wait until they heal up before handling the mouse and making some substantial progresses. 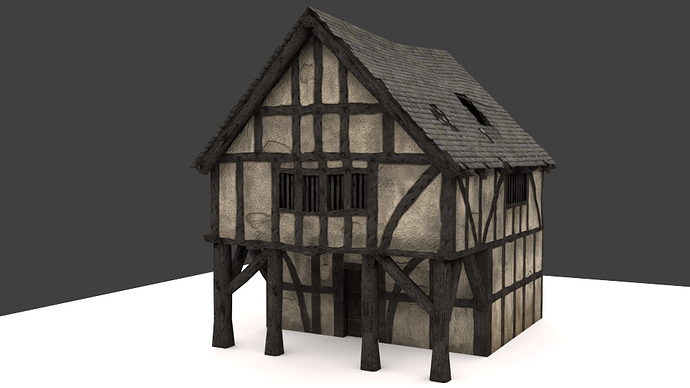 It’s good to seeing you back and still on track. Compared to the plaster work the wooden beams look a bit to structured, like it is some other kind of plaster in brown color.
Keep up the work.

the fact is I have visited many timber-framed houses (Elizabethan mostly, since older ones are difficult to find) and I have seen that plaster is at the same levels of the beams, so that the timber frame doesn’t stick out. Medieval houses had simple compositions, their owners could not afford elaborate wood works in the frame, so that (we are talking of 14/15th century) it was only composed by vertical and some oblique beams. Horizontal timbers were used to divide and keep together the sections of wattle. What do you mean by structured? Thanks for the feedback though!

Look at this close up of the Merchant House (14th century). 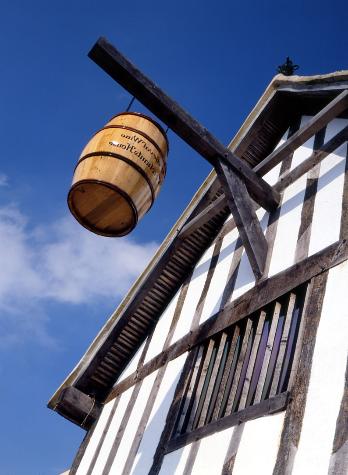 The wooden beams seem to have a bit too much bump. Perhaps it’s only an issue with mapping but I think the grain should be more along the length of the beam.

This looks really good! I’m new to 3d/blender so take my advice for what its worth but I think maybe the front posts should either be straight or flare out a little more.

Thanks for the advices, I have modified the front texture, here’s a close up of the timber work by the window and an inside view (just to try, shutters and stuff missing, might model the interior when I’m done outside). 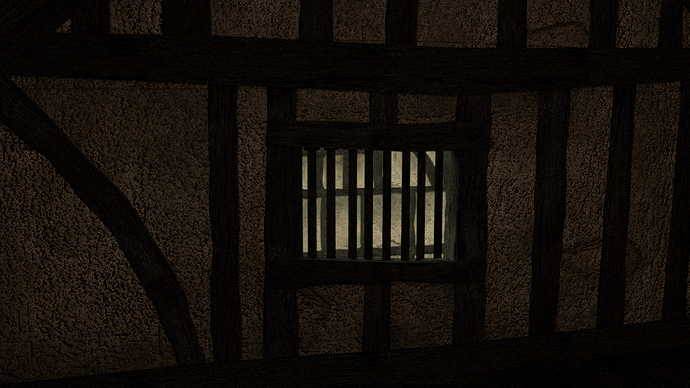 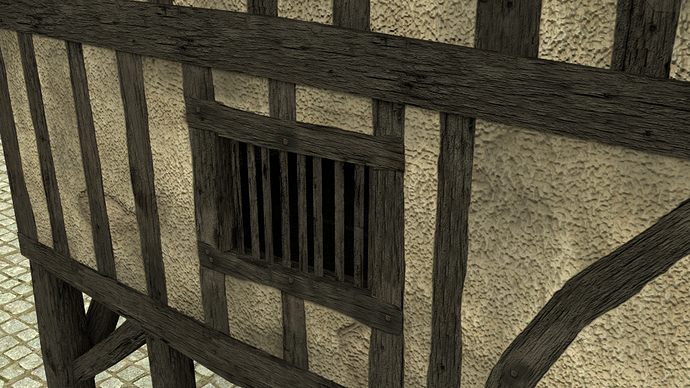 Looking good. I was wondering, do you know why the wood is so darkly colored? It does not look like sunburnt. More like it was treated with tar or pitch.

Looking good. I was wondering, do you know why the wood is so darkly colored? It does not look like sunburnt. More like it was treated with tar or pitch.

Yes, to last longer.
Nice job, I like your progress. I think the bump on the wall is a bit too much.

Here are some progresses, I have improved the quality of the texture, reduced the bump and changed the lighting.

Now the wattle is visible, these kind of houses are called ‘wattle and daub’ because of the framework made of wooden branches (wattle) then covered with a mixture of mud, dung, thatch and clay (daub) and eventually by plaster which was then whitewashed.
Still WIP, have to work on the framework beneath the tiles and find a way to give more thickness to the tiles (transparent plan).
Hope you like it, the total count of faces so far is 800. 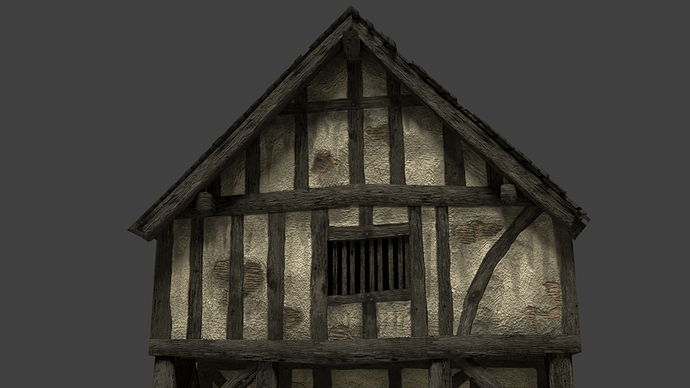 front facade almost complete, need to fix the textures on the beams and the framework under the shingles. 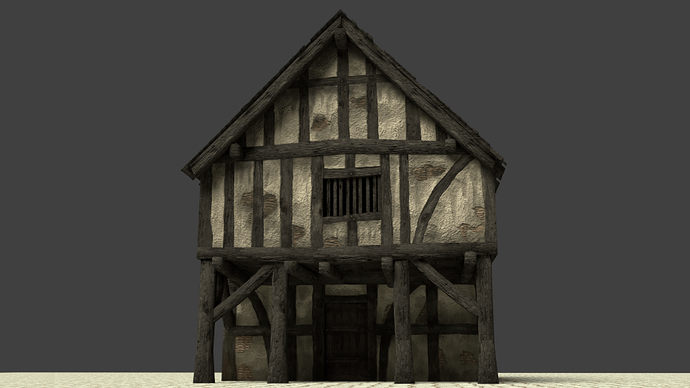 Splendid job, might need a tiny bit of dirt/moss on the bottom edges though.

Thanks! And yes, will add it (still have to create the textures for the timber pillars). The other thing I’m struggling with is how to to give thickness to the shingles, since I’m using an alpha map for the transparence… 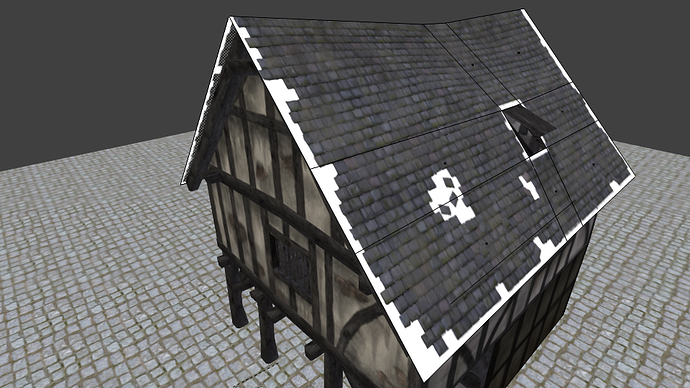 Dirt added to pillars, here are two views of the house (800 faces). Still don’t know how to give thickness to the tiles… Any ideas? 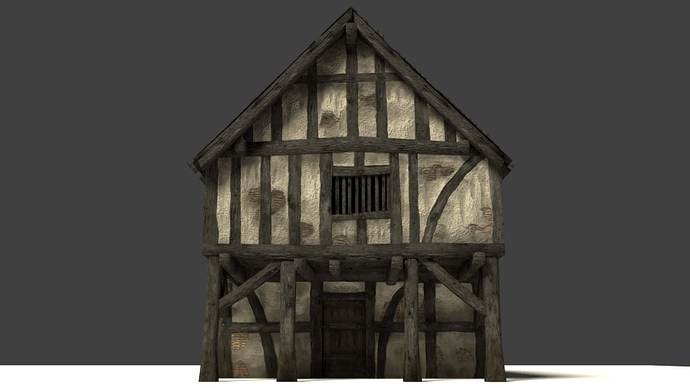 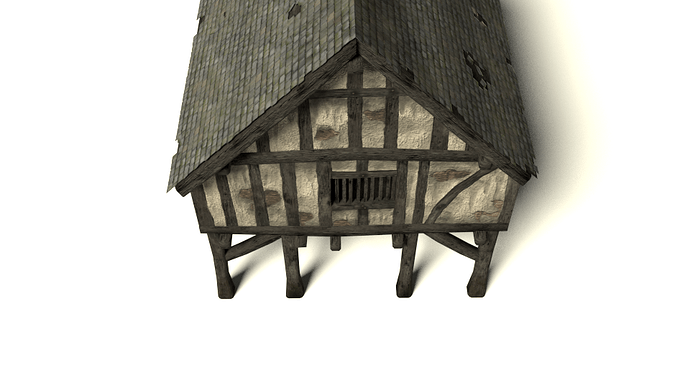 First muddy road texture, still a lot to do. Would like to add a displacement but that’s gonna be millions of poly… 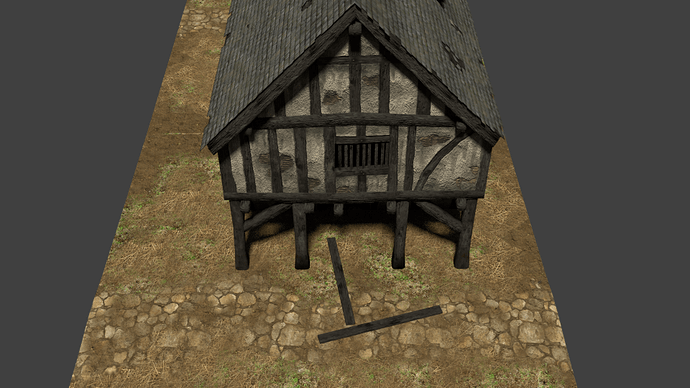