So I have just been cleaning my old Meccano for my grandchildren to play with, having been inspired by the “Windup Toy Tank” WIP here that reminded me of my childhood and the Meccano that my parents bought me. Every Xmas and birthday from the age of 4 up to around 14, when girls and motorbikes became more interesting, I got Meccano presents. I was also provided with a sheet of the required gauge of steel and a drilling jig that Dad made from an old file. I already had the tin snips, files, and other hand tools by the age of 8. Whenever my requests for many new parts fell on deaf ears, I would make and paint them myself. I even made folding jig to be able to bend the tight corners on Meccano parts. Thin “skinning” plates were made from old food tins, so they could be bent to fit the model being made.

Then I thought “Why not make some pieces in Blender and recreate some of the old models I used to build?” So I had a go: 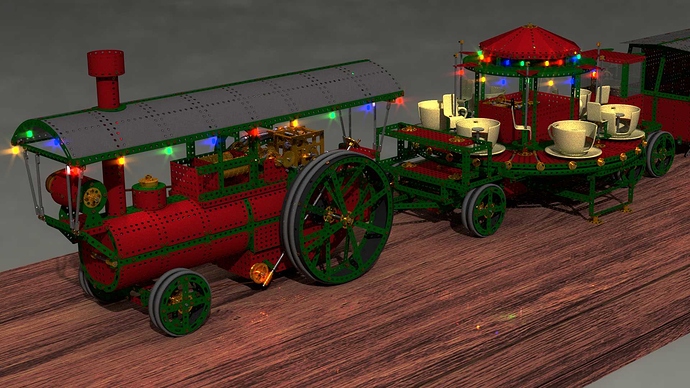 I am going to make all the parts I need as I go along with the model. This is much easier in Blender than it used to be in the real world I might add. I started off with an image, which has a white background and a gazillion black circles at even spacing as my “Holes” texture, I then use this in the material to cut the holes by mixing in a transparent node. For the plate with the holes around the edge, I just painted white over some of the black circles. The Meccano is brand new at this stage, but may well get scuffed and the paint chipped as I go along.

The model will begin to emerge as progress is made - it will be a mechanical model and will be rigged for animation. In my childhood I used an adapted old clock as a clockwork motor until I have enough pocket money to be able to buy an electric motor. I intend creating gears and chains as I have in my Meccano set still to this day, so at least I have something physical to work with as my patterns. Some of the parts I made were not standard Meccano so if you spot something that was never in the official catalogue, it was “Clock-made”.

Comments and critiques most welcome as ever. :eyebrowlift:

Can you guess what it is yet? 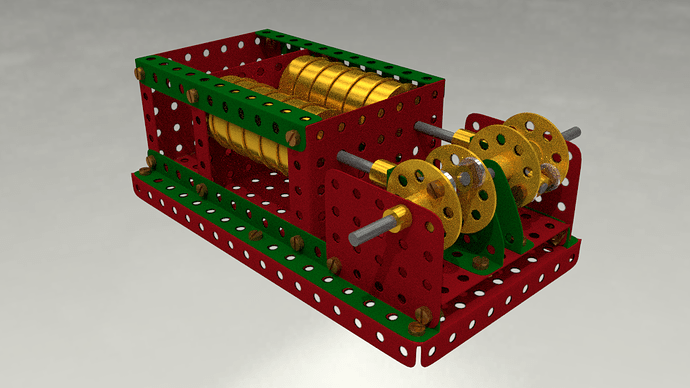 Well at first I thought it might be two steam pistons driving a crankshaft, but I cant really see the crankpin on the bigends connected to the crankshaft. So maybe it some sort of valve pump using straight push rods sitting on a cam shaft, like you see in the old tin mines.

Can not see what it is, for now…I think it is something that will need a motor…

Model looks good and Your Story is Great…Made My day…

Can’t wait to see the result…Cheers

@coops - right first time! It is a two cylinder steam engine, but it will form part of a bigger model, one I made over and over again. Exactly what that is will emerge later.

Here is an update with some gears added (I had lots of gears as presents!), the top shaft nearest to the camera has the gears that keep the crank-shaft all in line. The outer two gear trains provide for two speeds to the lower shaft. I will add the mechanism that simply moves the two large gears on the lower shaft so that the one with 1:2 ration engages or the other with 1:3 ratio engages, this shaft will drive a differential. 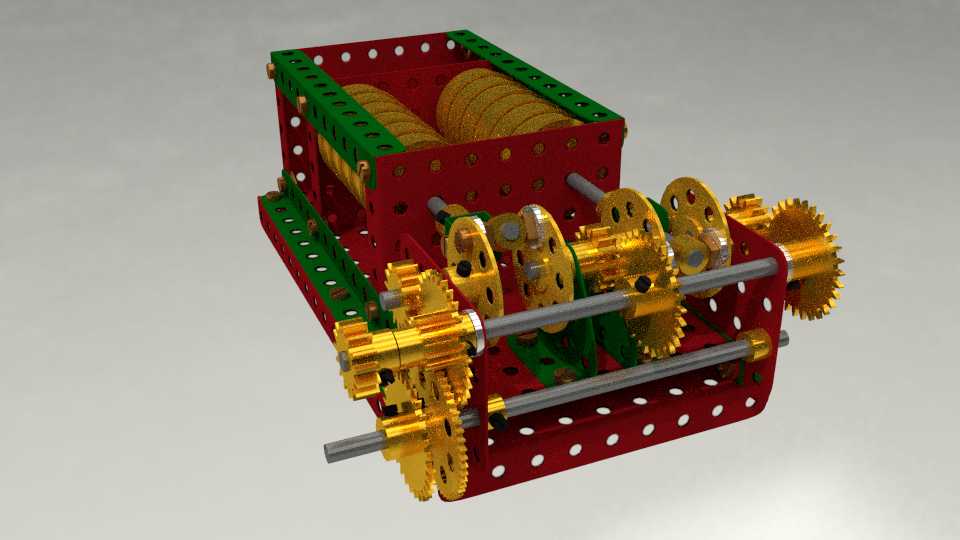 The lower shaft has a keyway so the gears can slide, yet still turn the shaft, Meccano provided special key grub screws to put in the boss of the gears - see below: 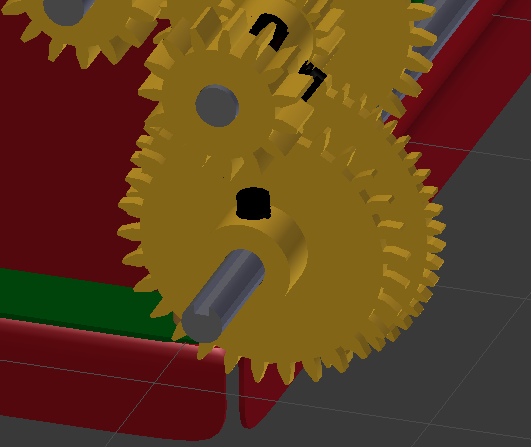 Taipan - thanks for the kind words, a motor will be required - I think I will add the clockwork one I made as a kid from an old clock.

Hi Clock,
Now that you moved the camera yes it is possible to see the end cranks, two things, are those cams that the end cranks are bolted into brass or metal, I remember Meccano yellow being a very deep canary yellow. The other is considering you got variable gear ratios is this to be one of the Meccano steam driven cranes. I know they did a huge dockside crane in red and green.

No - it’s not the crane, although that was a superb model. This one was never in the Meccano catalogue.

The crank plates are brass - they were a brass disk pressed onto a standard boss.

Here is the next stage with the differential in place, this is all rigged by the way: 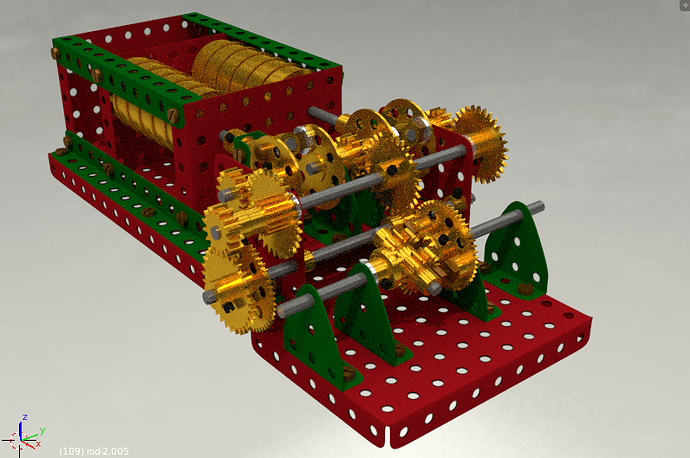 The rods on the diff will carry chain gears, this is a little clue to the final project.

Cheers, Clock (back to being a child again). :eyebrowlift: 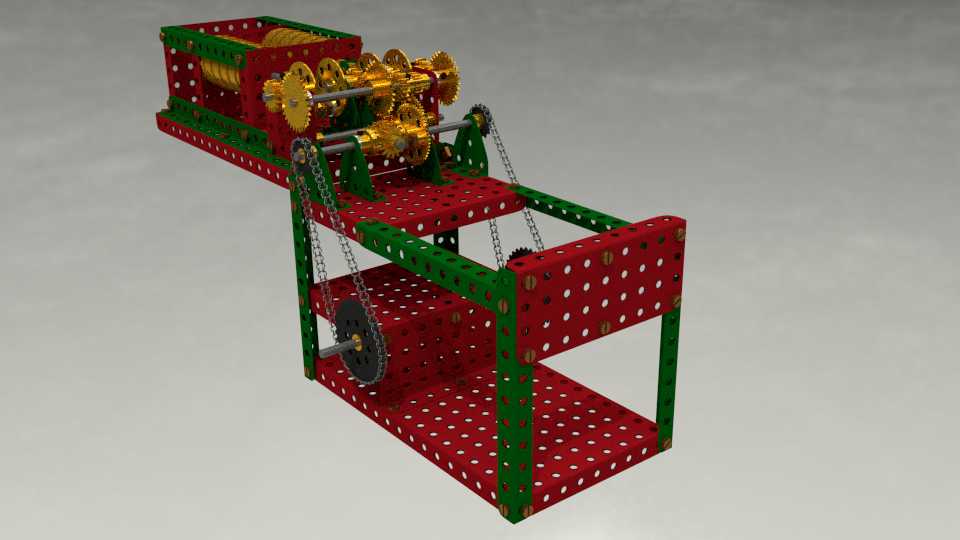 But they are all rigged and work properly.

There are two non-standard meccano parts so far, both of which are in my box…

Today’s and some of yesterday’s work: 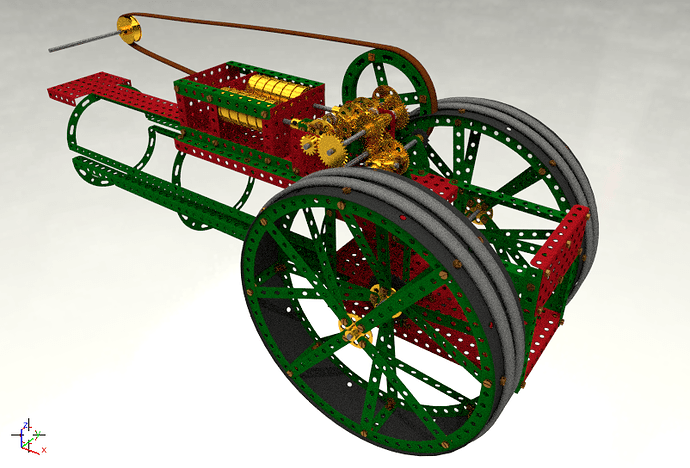 The tyres and drive belt were made from rubber strip, after nearly 50 years, they have long perished, but I still remember what they looked like. In fact ALL the rubber tyres, etc. off all the wheels I had have perished and turned to powder/gunky mess. The black plates that form the outer surface of the wheels are Clock-made, but I think there was something similar in the No 10 set.

Hopefully now you can see what it might be…

Well here is a bigger clue: 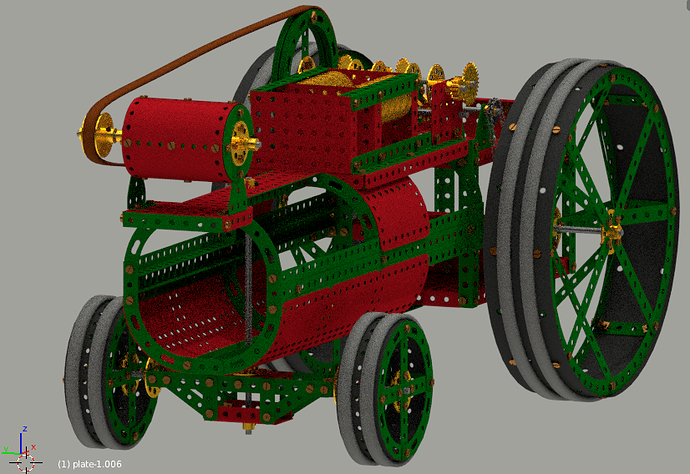 Now I have enough wheels on it, a train is probably not the case. The biggest clue to get it exactly right is the generator on the front and the top mounted steam engine.

As for rigging, I rig it as I go, so when one piece is in place, it gets rigged, that way I don’t lose sight of what does what.

Probably the last update before I go to Australia tomorrow: 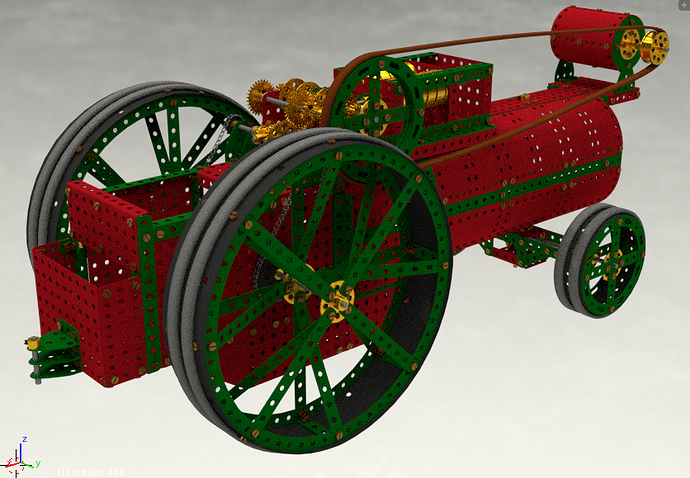 There is still much to do and many new parts to make, but I am enjoying this project - hope you are too

PS. I will be back in four weeks time, so whilst I can reply to messages, I am not taking my Mac with me so I cannot do any more work. :no:

This is the last one… 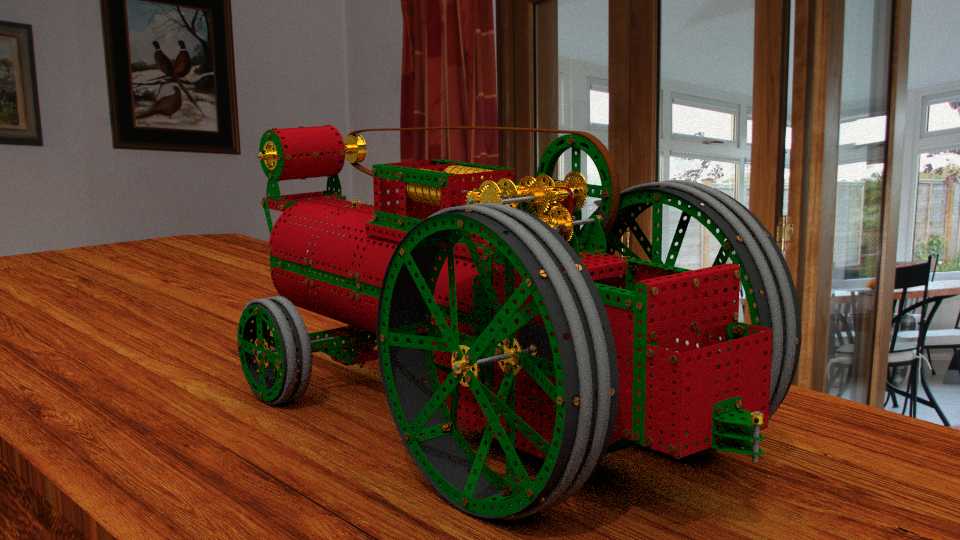 It gives some idea of the scene for the model, although the picture for the background is not the final one - I am going to take a photo of my dining room with its table then put the model on it, but it gives the basic idea I hope. I will need to re-align things better, but I will do this once I have the proper photo. I will be able to align things so my “Blender table” sits exactly on the real one, with a bit of luck. :yes:

In the animation, the model will move along the table, so that will present new problems.

Off to visit the colonies now…

Cheers until next time, Clock.

If I did not know it is a 3 d model…I would think it’s a really Meccano Model.
Very well done.

Have a nice trip…

Very nice Clock, hope to see it finished when you get back, enjoy your trip.

Greetings from “Down Under” !!!

thanks for the comments, I’ll be back end of Nov.

Mrs. Clockmender brought her MacBook Air to Australia, so while she wasn’t looking I loaded Blender and had a play at making a clockwork motor similar to the one I used to have as a child: 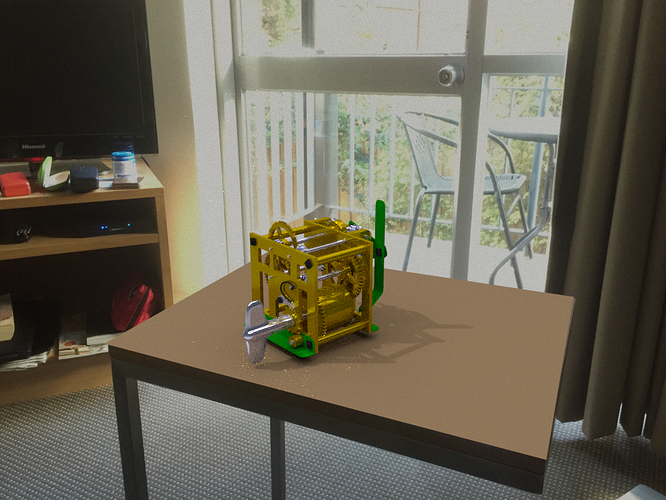 I used the chime train from an old long case clock in my youth, so this is probably close to what I had at the time. 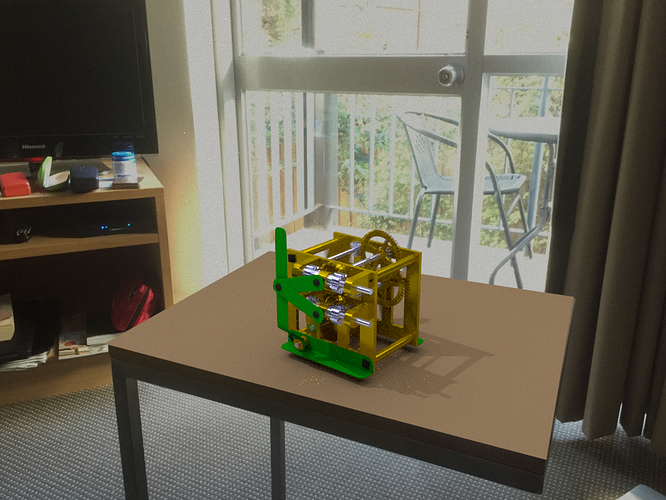 This motor has two output shafts, the top one running four times faster than the lower and both have a reverser mechanism. This background picture was taken in one of our apartments here, with the clock motor placed on the coffee table. :eyebrowlift:

PS. Hope Mrs. C doesn’t realise what I have been up to on her machine… :eek:

PPS. Sorry if this post is upside down, but I am in Aus, not at home.

Update - with the roof and clockwork motor installed: 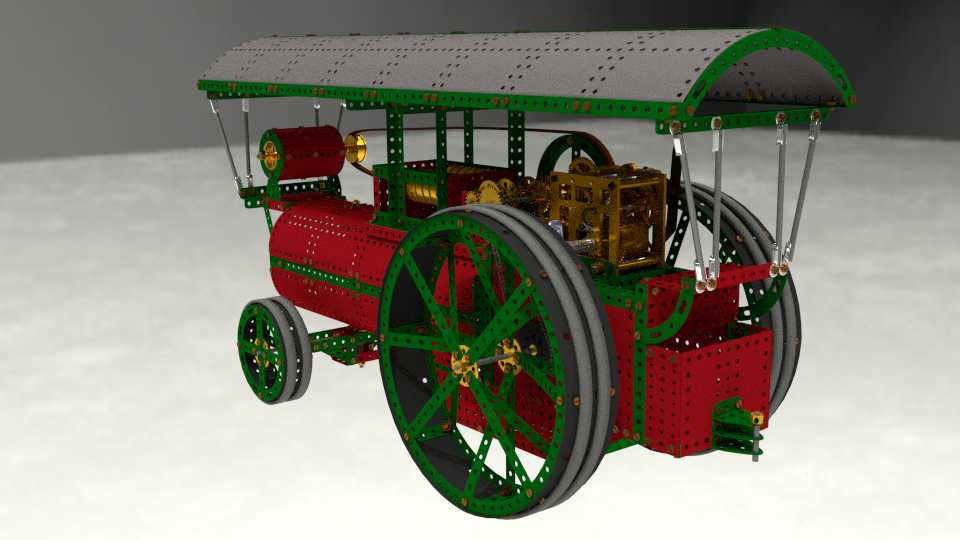 Hopefully you can see where I am going with this now, I never had enough Meccano to make both the Showman’s Engine and the “Tea-cup” Ride, so this is the first time I have seen them together! 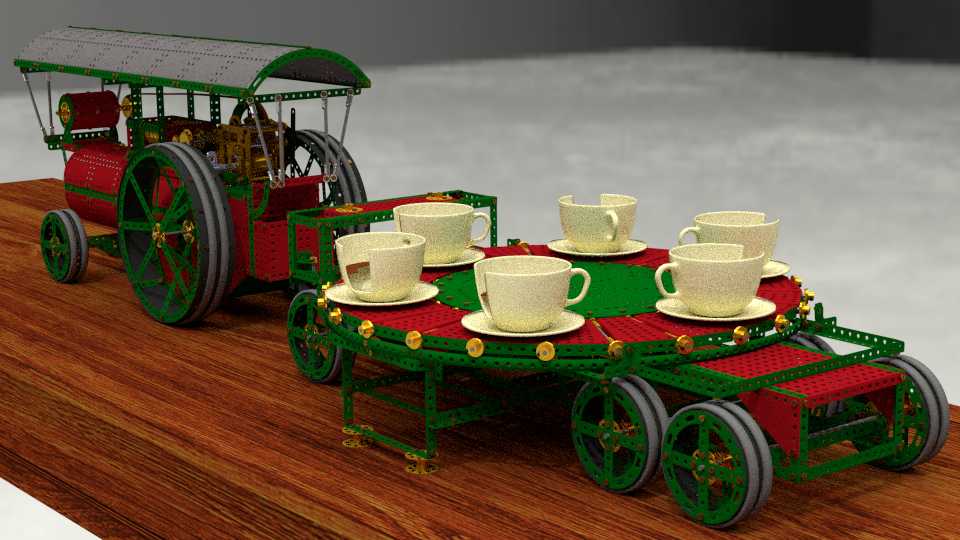 The Tea-cups where made from those old plastic sets you used to get in the '60’s for picnics, I probably was given them after my parents decided they were too naff to use again…

Here is the ride stowed for moving, in Blender this is all rigged so I only have to move an Empty to get to the stowed position, in Meccano it involved more time and refitting some bolts, etc. 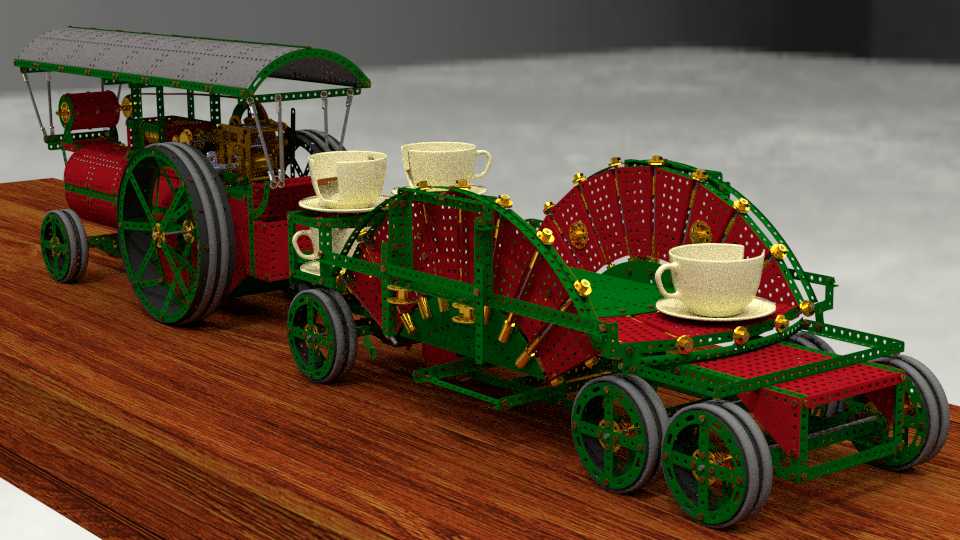 There is still a lot of work to do here, but progress is being made! :yes: 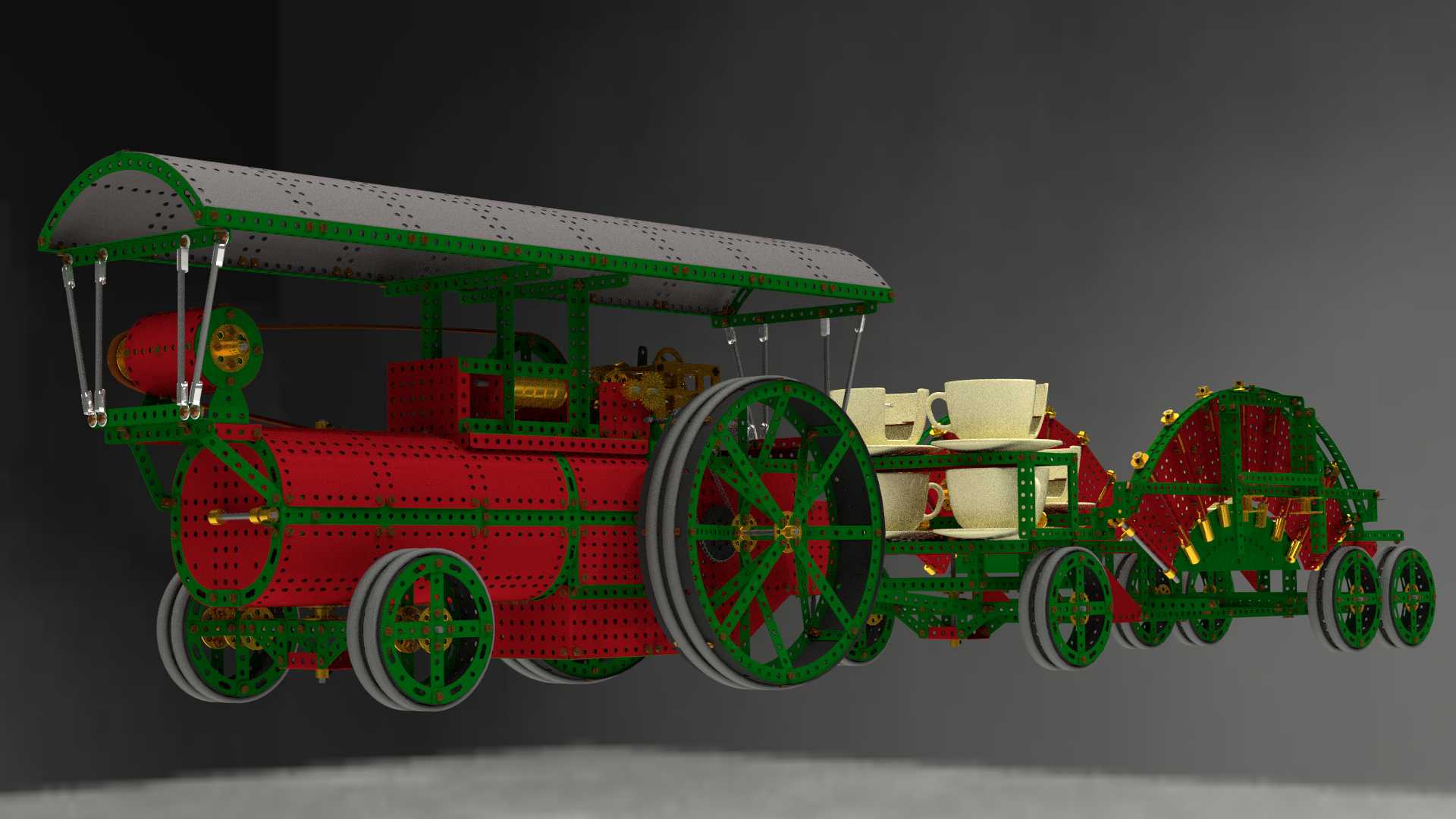 This should show the materials better. I wonder if I should start distressing the Meccano at all - what do you think, would some scratches look better?