I am quite new to this forum, as well as quite new to Blender. I decided to start my own WIP thread, because I have still soooooo much to learn. Some feedback, tips and comments from other users and BA community will help me with this project.
Also, I hope my level of English is understandable. Theme of this project is obvious, so for this reason for sure I will need to check for some new words, spaceship and other technical stuff nomenclature.

I was always fan of sci-fi - movies, books, games etc. With such a tool like Blender I am able to create, design and visualise my own spaceship project. Also, I was hugely inspired and motivated to do this after reading “The Great Spaceship” thread, projects and works of Dan Brown.

What are the assumptions for beginning:

PS. This is only a thread starter post. I will put some pictures of what I did very soon :eyebrowlift2:

So, it’s time to show something.

I started with some sketches on paper, showing the overall size and shape. The clue with designing spaceships is, that probably earlier someone already did something similar. Often we are designing something similar unintentionally, based on what we’ve seen on TV or sci-fi movie.

I am talking about this, because I am sure for nearly 100% that such ship or very similar was already seen somewhere. During design stage some parts will change many times, but overall look will stay the same. 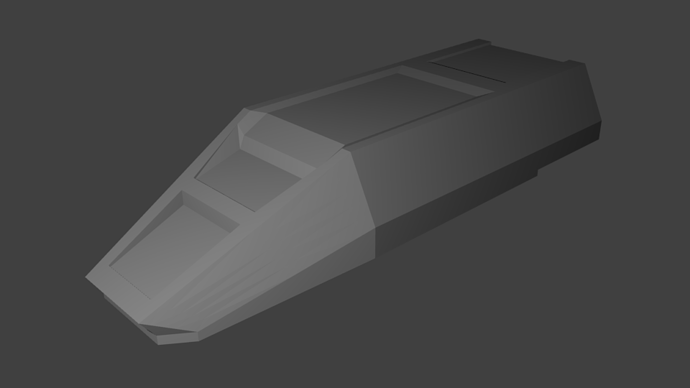 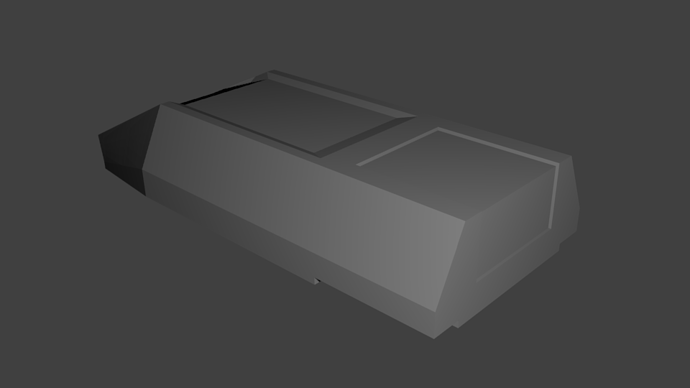 This basic shape is more or less, what I sketched on paper. Overall size of this ship is: 90 metres long, 20 m high, 35 m wide. It will contain three decks.

I am not sure about showing the screenshots from Blender. Please send some tips, how to properly set the scene/camera for showing progress. I think it would be better to show mesh. Like this? (screen from later stage of design): 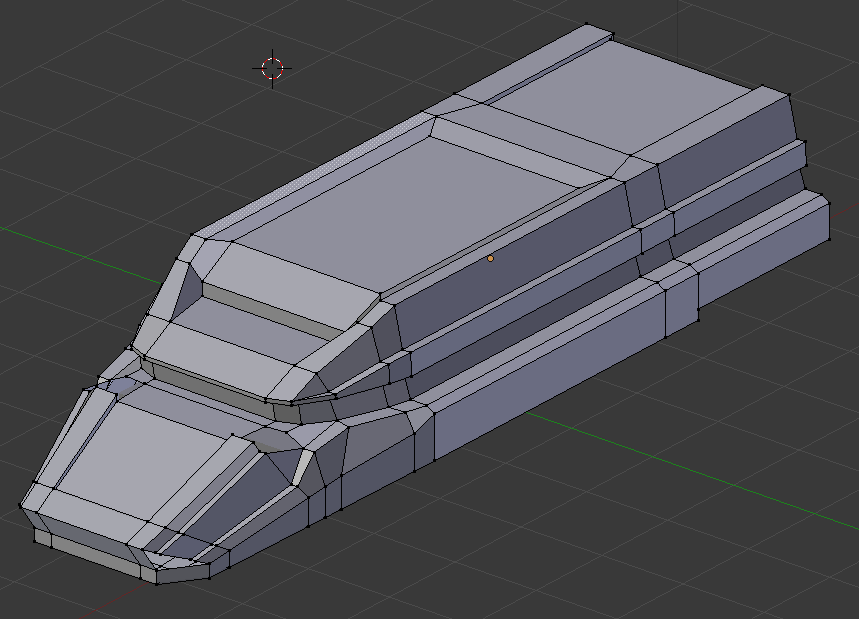 I will be happy with any feedback. Oh, I almost forgot. There will be wings added to this ship, more or less like SW Imperial Shuttle.

That’s 90 meters?? The overall feel of the shape looks a lot more like a personal, more car-like sort of spaceship. I like it so far, but the shape is very basic (at least in the render, in the viewport render it looks more detailed.)

For time being, I have much fun with developing Spaceship One.

Spaceship One will be renamed later. I have to think about new name of this ship, as well as name/logo of shipyard, which is building this spaceship. But, like I said earlier… 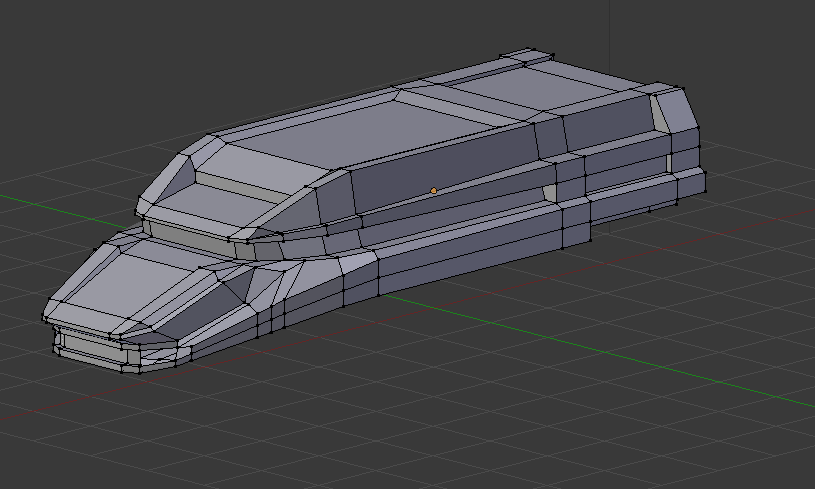 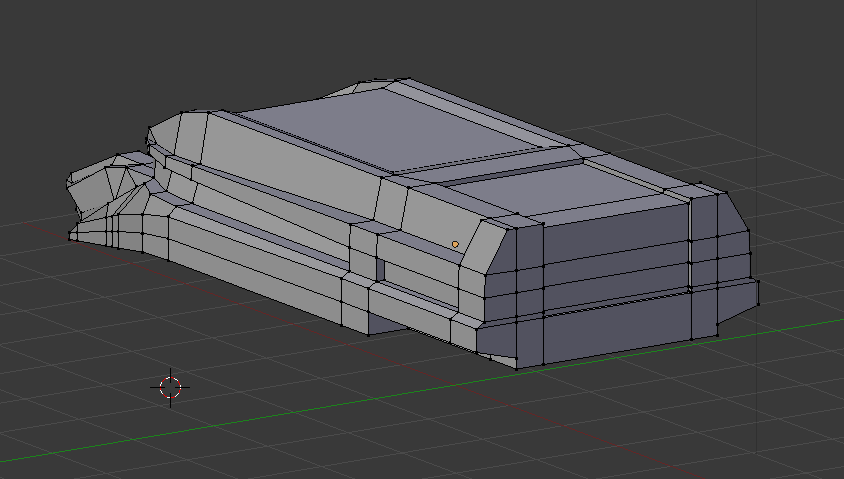 Spaceship gets more and more complicated. I have some further ideas for development, but they still have to be implemented in model.

@owldude: Yep, this basic shape may look like car-body, but this wil be more complicated during development. Probably I should insert a kind of human shape for scale reference.

Here are some screenshots made last Saturday: 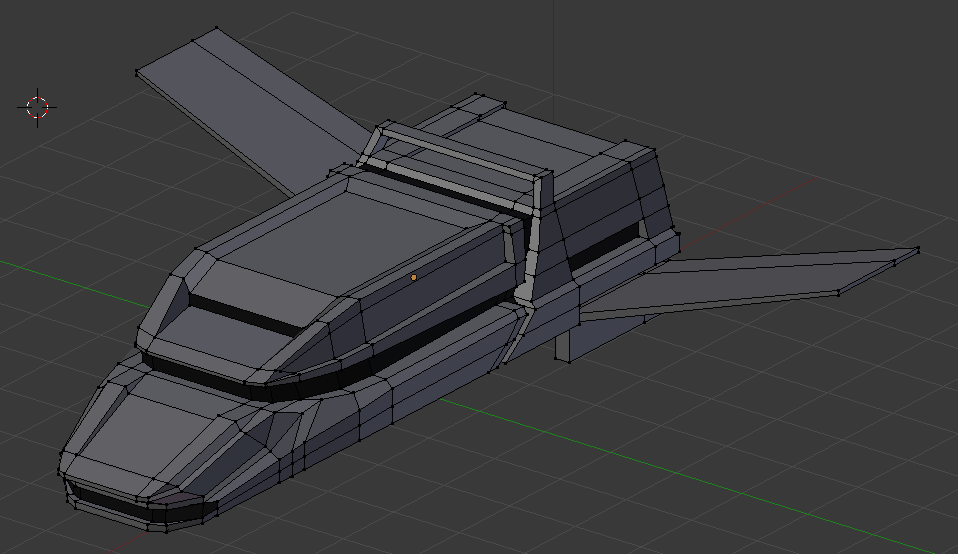 Darker areas will be equipped with windows, greebles and other smaller stuff.

I have to think about more and more details, having in mind that any item on this ship should have it’s own purpose, layout and technical accuracy.

My biggest concerns now are front part of ship and wings…

Meanwhile during correcting some overall shape issues, topology adjustments and other stuff like that… I’m thinking about some details, especially those which could have impact of overall shape of spaceship.

I would like to place all these things in appropiate way. I mean, if I put something in ship, it could be for certain purpose, should be possible to manufacture and assembly, should be accurate in operation/maintenance/mechanical way.

Having one of spaceship screenshots, I started to do some “painting”. I hope this picture is more or less clear and readable: 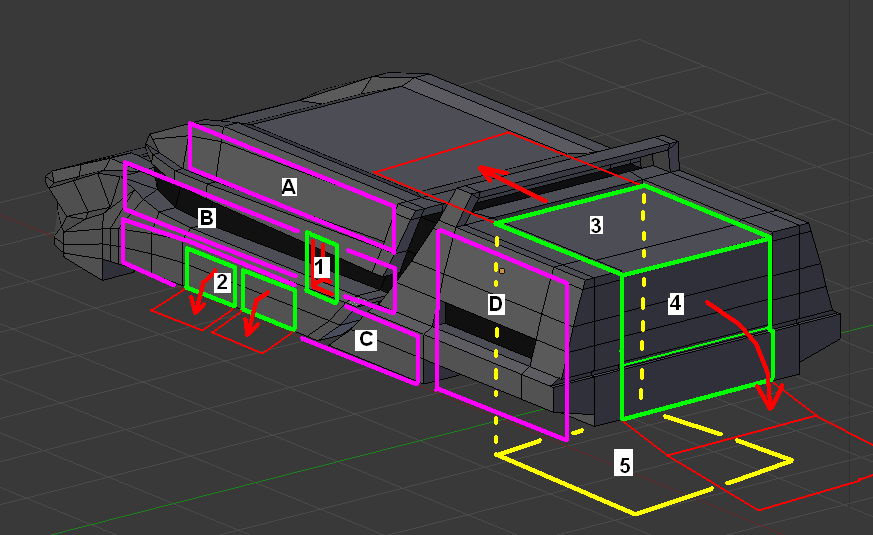 For consideration, in cargo/hangar area there will be movable platform/lift which could operate in various elevations (including grade level in landed position) - marked as no. 5.

What do you think of it?

I did some modelling yesterday. I added two… kind of… aerodynamic things. This is my first more serious attempt to model with various modifiers. For these wing-y items I added solidify and subsurf modifiers, as well as mirror modifier. 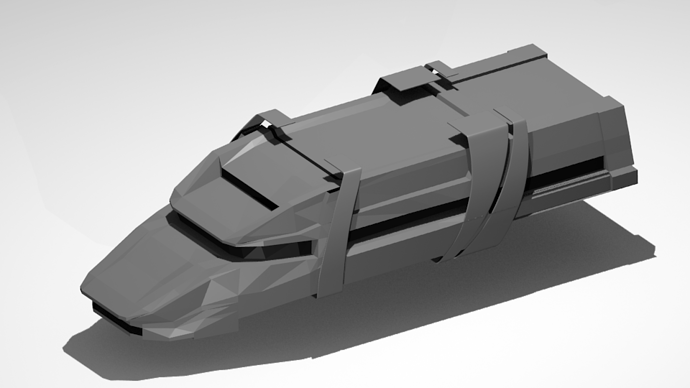 As you can see, I did a preliminary camera/lighting setup, so starting from now there will be more rendered screenshots.

One more issue with these aerodynamic things…

Maybe they give more stylish look, but also should have certain purpose. I thought they could change its vertical position to help this “brick” to fly in atmospheric conditions.
Second purpose - they could be supporting this ship in landed position.
Third issue with those wings - I think I will split them horizontally somewhere in middle location - they could hide/fit in spaceship main body in more hazardous situations, like entering atmosphere…

Besides of progressing modelling of this spaceship, also I started to think about background story and overall environment.

That means, for example name, logo, status of company/factory which is building this ship. I have an idea, but for time being I will not reveal any details of it. After finishing this spaceship, I will try to use experience gained to model/build another spaceship, various purpose and size. Because of these plans, I think it would be nice to have some ships categories (class and type). Usually class means size, so I think I will use roman numerals I-V to categorize ship class. Here are some details, some data need to be completed, some can be changed:

By the way, spaceship in this thread will be class III, I think. Also, as a first spaceship, I think its name should be “Morning Star”. What do you think?

So with the name of the thread, I thought you meant the Burt Rutan ship http://upload.wikimedia.org/wikipedia/commons/4/46/Spaceship_One_in_flight_1.jpg

but hey, carry on!

Looks good so far, I like the thought you’re putting into the backstory.

@aflocka: Name “Spaceship One” came first to my mind - I was no fully aware that such vehicle is already built. AFAIK, I somewhere heard about this ship. Hmm… is there a possibility to rename thread title? 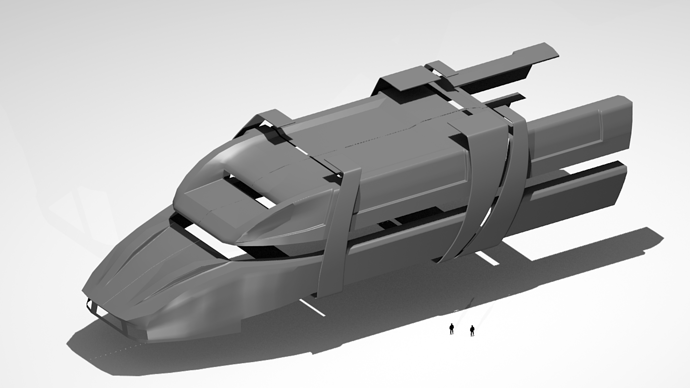 Generally, ship looks smoothier, but I still have much to learn with proper modeling with modifiers. There are some areas which I don’t like, strange shading, some bizarre shadows… I can give later some details, show topology and someone could help me with that issues.

As you can see, I attached two “average” height men (1.80 m)… probably pilot and stewardess

Year 2023:
A group of businessmen, engineers and scientist decided to develop and found a new company, which will be developing modern vehicles operating in atmosphere and orbit around Earth. Also, founders of Infinite Horizons Industries gained access to some recent researches and patents of new engines, powered by antimatter. This could increase possibilities to research and develop new spacecrafts, which could operate in Solar System.

[still need to develop some details/issues connected with engines]

Year 2030:
IHI (Infinite Horizons Industries) ends development of new hybrid jet/antimatter engine. Simultaneously, company produces spaceship bodies with different size and purpose, in which new engine could be tested. Testing flight are planned to be performed in different heights of atmosphere and orbit.

Year 2032:
Few worldwide corporations are interested to use IHI spacecrafts to reach new possibilities to invest in Earth’s orbit and later on Moon. Investments will be connected with scientific researches, as well as obtaining various resources, which could be used for further expansion in Cosmos.

Year 2038:
Most governments are still coping with approaching and descending crisises, and they are not very interested in Cosmos exploration. Commision with members from most significant countries gave permission to create consortium of corporations. Part of consortium incomes will be given to certain countries.

Year 2040:
After massive planning and various negotiations, consortium of corporations is founded. First target of consortium is to build a huge station on Earth’s orbit. Station will replace old and veteran International Space Station. Next step will be developing first permanent base on Moon’s surface.

Main role of various consortium members is to gain and deliver funds for achieving target. To accomplis these plans, consortium is associating dozens of factories, engineering and scientific companies.

One of these companies is Infinite Horizons Industries. This company is one of consortium’s key entities because of knowledge and possibilities of developing and producing various space vehicles with new type of engines. After agreement signing with consortium, budget and possibilities for IHI are hugely increased. 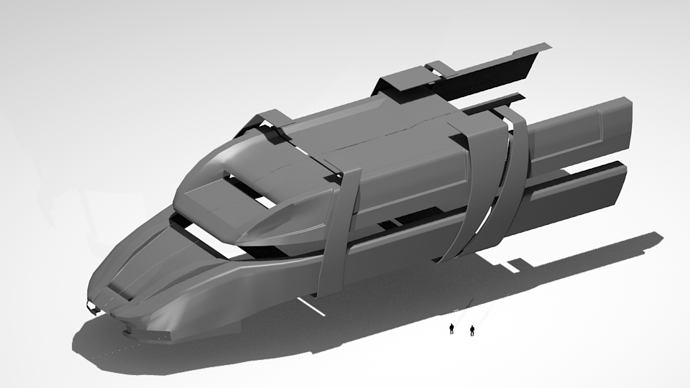 Thinking and remodelling in progress. Medium and rear section of ship is more or less OK.

I would like to progress with other parts, too. For example openings, windows, entrance/airlock. For this reason I have to think about general decks layout. 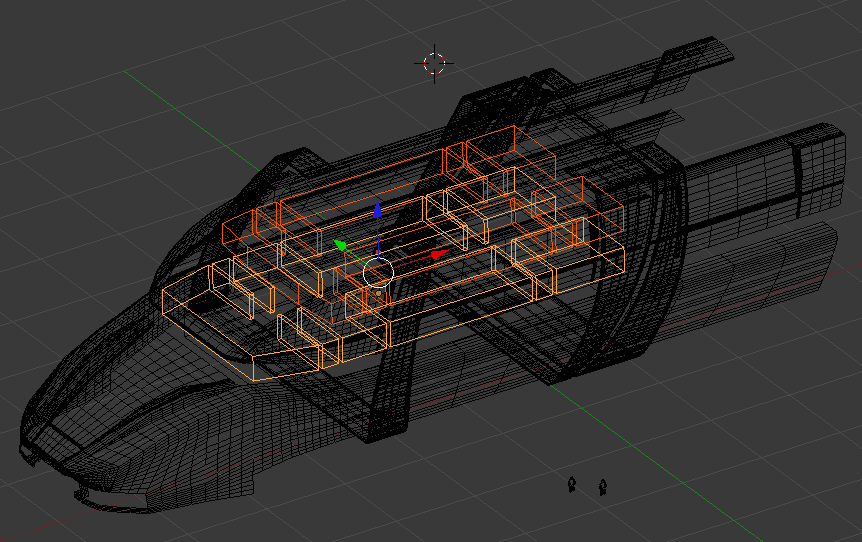 More details soon. I have to think also about location of main engines and thrusters.

Small update… after recalling of some cgcookie tips (mainly about modeling and modifiers): 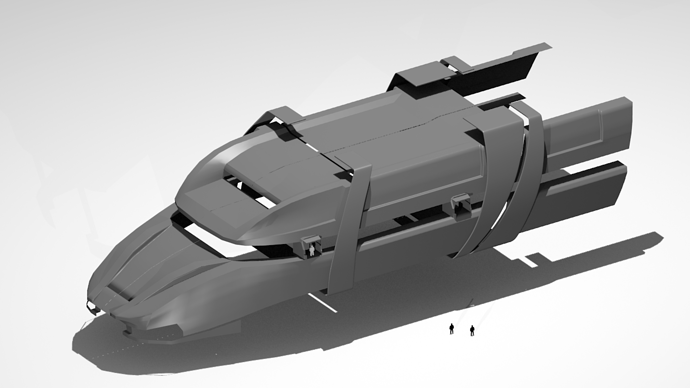 Remodeled some parts of body with another set of modifiers: mirror/subsurf/edgesplit with some edges marked as sharp (previously sharp edges were marked as additional mesh loop). Started also with airlocks/entrances to spaceship.

After finishing the rear and bottom sections of body I will temporarily stop working on them. Openings, engines and some other parts will have affect in some areas, so I will continue to modify main hull of ship. I have to mention, that I still don’t like the “nose”, front part of this vehicle. 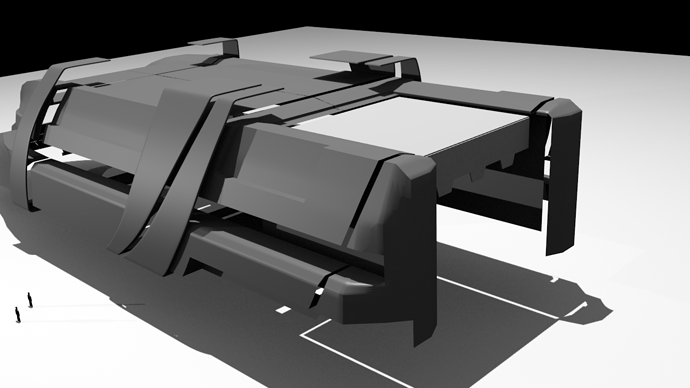 Rear section modelling started. I have to start thinking intensively about main engines and wings.

I think it would look better w/o wings personally. Bugs me to see space ships with wings since there is no air in space lol

In first post I mentioned, that this ship will be multipurpose shuttle with availability to enter atmosphere. So, wings are rather required… but I’ll think about it :spin:

nicely done…cant wait to see the final piece of this.

As usual, besides of modelling I also like to add someting connected with technical and story background… I know, I know… my engineer’s habits and thinking… :evilgrin:

I was wondering recently, how much such ship could weigh? This is rather important, because if this vehicle is planned to start from Earth’s surface…

If we sum weight of all material - this is enormous amount of 166997 tons !!! For example, Saturn V rocket weigh with fuel and everything else was 2790 tons…

What engines we need to lift this weight from Earth’s surface ?

I need to think about this, if class III ship is able to land on planet.
Maybe wings are not required?
Also percentage of futuristic materials used for building this ship should be increased… I like this carbon nanotube idea - http://en.wikipedia.org/wiki/Carbon_nanotube - already mentioned in NASA page as material used for future spacecrafts.

EDIT: I think ship is not fully made of all materials mentioned above. There should be also spaces filled with vacuum and air… But even we assume 30% of ship is without any weight, this is still about 117000 tons… 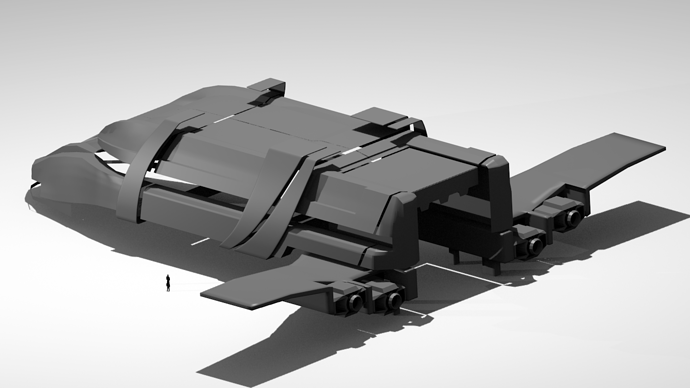 Mentioning the engines, I was thinking about dual operation engines, for example advanced jet engine when operating in atmosphere and something like ion thrusters in vacuum conditions.

There will be also engines in front section of this spaceship.

Time to write something connected with background story. I was thinking about corporate consortium mentioned few posts earlier. I thought about seven most powerful and meaningful branches of today’s world, which could be joined together in future to create the biggest business entity on Earth…

Those branches will be:

I still have to find a name for such business… Maybe something with 7 in its name? 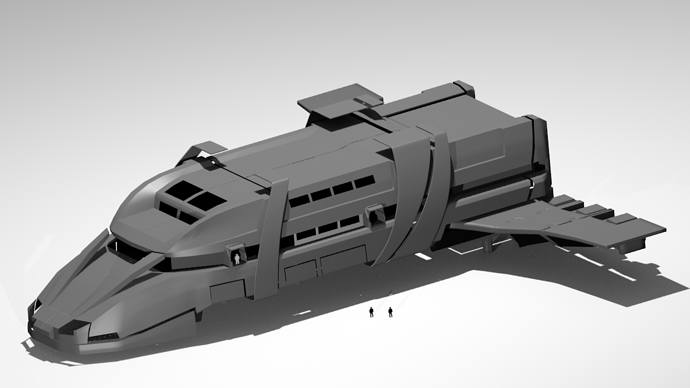 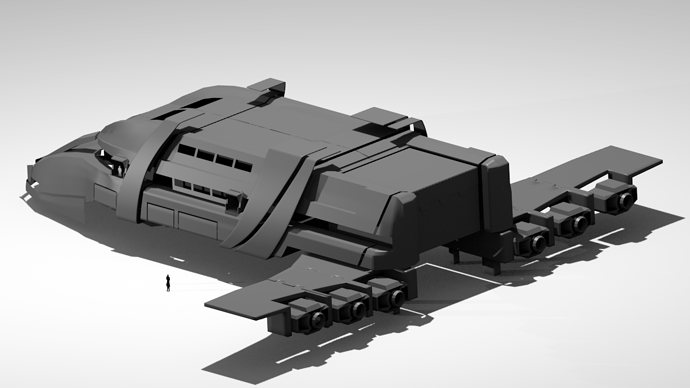