Hello, I have been working on this character little over a month.

I’m looking for any feedback on how it looks and where it needs to be improved on.
Please provide honest feedback and reference for what you point out! 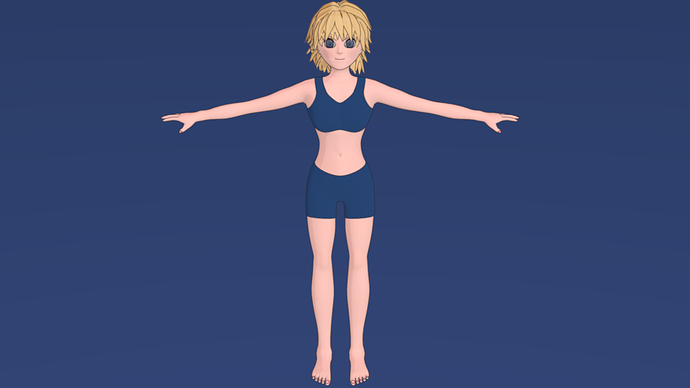 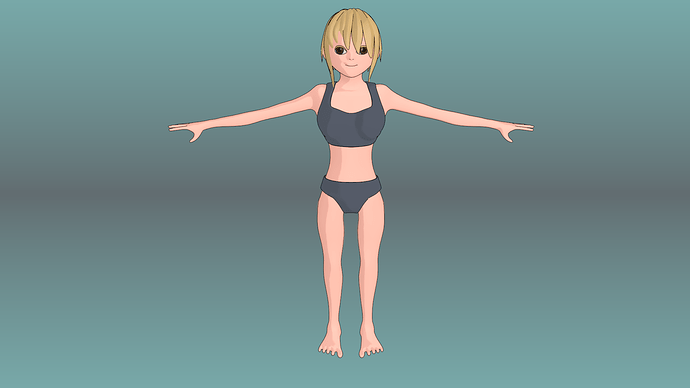 I’ll update this as much I can.

legs look out of proportion, make longer… otherwise great character, could you post closeup of face?

The hips to shoulder proportion doesn’t look right; not sure if it is just due to the viewing angle though…

I’ll adjusted the legs and here’s a close up 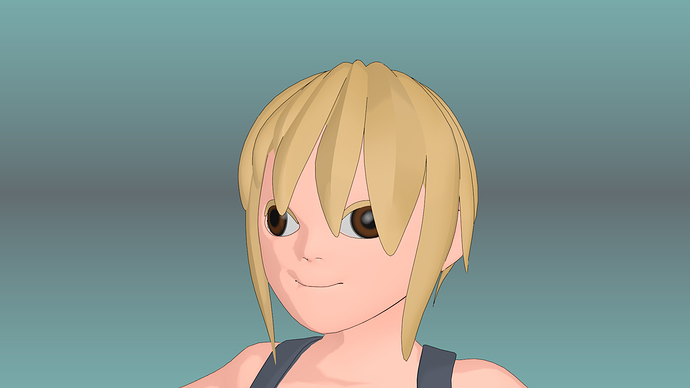 Concerning topology: boobies are a bit out of proportion, face needs reworking. If you want to study some blender anime characters search for made san on blendswap. Discovered these yesterday: http://www.ntv.co.jp/tesabu/mmd/ You can install an addon for importing mmd/pmx files and study these characters as well. They are made by the original studio.

If you need look for mmd (miku miku dance) on deviant will get hair models and eye textures.

If you need some reference pics to model after try this site:http://www.sekaiseifuku-zzz.com/chara/ A new and upcoming anime.

Drop by for the google+ 3D Anime community. Just learn and improve.

Legs are too small, especially in cross section. They don’t appear to be that much larger than her arms. Also, her toes shouldn’t be splayed out like that. Legs are also too short for an anime character. Anime characters generally have longer than normal legs, similar to fashion illustrations.
Her hands might be a bit small, too. Rule of thumb for hand proportion: if you put the heel of your hand on your chin, your fingers touch your forehead.

I have looked over what you all said and tweaked it

cant wait to see your next update, you have done a smash up job already… mind you I simply though the face was stylized you may tweak it but even it could have went on with minor eye and lip abjustment Also Thanks for what Y’all have helped with so far

Eyes look much more natural. As do the feet they are a lot better.

Looking at the 3d view in your original post the curves of the breast are a little odd. They are lumpy in places with unnatural curves, like they are pressed into shape out of modeling clay. Your update looks better but its hard to tell the roundness of boobs form a 2d front view.

Again Looking at your original 3d view the ass crease is too large for that size ass. Either lower how far up her back the Ass crease goes or give her a booty to match the crease. Maybe a little of both.

I’d also suggest you push the breasts in a little but without reducing the volume. Making it look like shes wearing a better fitting bra that gives some lift. That way her outline will look a little more natural but she will still be well equipped

Her box-gap could do with some shape too. It looks far too square. Either give her a little thigh muscle to close up the gap a little or give her some toe to add some shape. Or a little of both for balance.

Also Thanks for what Y’all have helped with so far

Need longer legs and the gap between the legs is too large. Its almost 50% the width of her abdomen.

Thank you @bigmonmulgrew for the Feedback.

I tried improving on what y’all said and I also Improved the face and eyes a bit too. 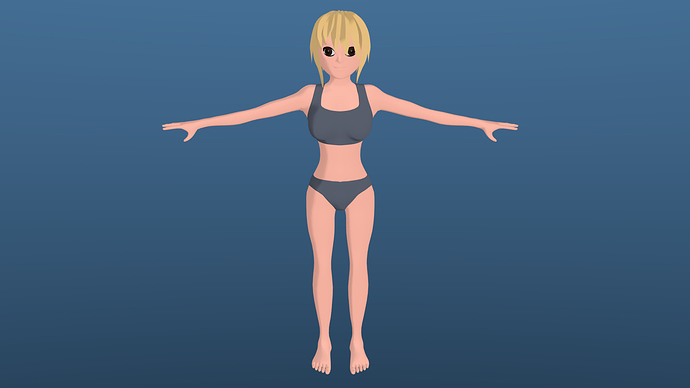 Thank you @bigmonmulgrew for the Feedback.

I tried improving on what y’all said and I also Improved the face and eyes a bit too.

When viewing from the side, the legs appear to be much thinner than the rest of the body. You need thicker thighs along the forward facing. The gap is still large between the legs but not as unrealistic as before. To fix the breast, lighting might work but not if you will be animating. You should move the chest back a little bit from the abdomen. Its not the size, its the appearance of proportion, and the forward leaning appearance is just unnatural, giving the off appearance.

Or instead of moving it back, the abdomen just below the breast down to the top of the groin comes out too far, this is also adding to the ‘off’ characteristic.

What are you going for? Realistic body for anime usage?

Oh, I understand the girl style is anime, but it seems more chibi.

She needs to be overhauled on almost every angle, try to follow some references. There are lots of anime models too.

The legs need some work. She has the chest of a twenty-something with the legs of a ten year old. It just looks off. If you made her flat chested you would have a very cute 10 or 11 year old anime character.

Here’s a update for y’all

I have been looking at alot of reference and studying and comparing it to my character to see where I need to improve it.

When y’all comment I usually google certain things said and get reference for it an try to improve on it. I would like when y’all comment to go more depth for the stuff you point out. Also if you can to provide picture based on what you have pointed out. 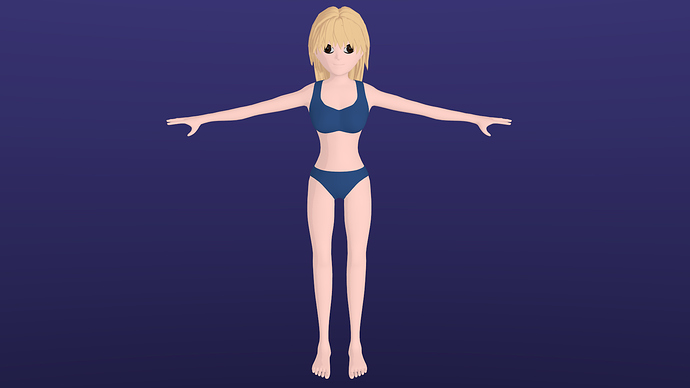 Thanks for the Feedback Everybody! :eyebrowlift: 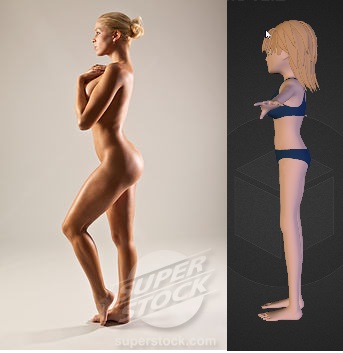 Ok I quickly googled a model. Take a look at this side view and appreciate the female form for a second.

Here are my notes on the differences.

Real womans breasts are a little higher. - This could just be a styling issue
Real womans butt is rounder and larger, although she is also stickign it out in this image.
The real womans thighs are much larger and muscly. While they dont need to have defined muscle they doo need to be larger on your girl so she does not look like a child.
The back of the calf muscles is also much larger and rounder. The diameter difference between the muscle and the ankle is much greater than on your model yet the ankle is still larger than yours.
The back/top of your characters head is much larger and higher than the real model. This could just be a styling issue since most anime characters have an enlarged head.
The curve from the ankle to the foot is too sudden, enlarging the ankle may partially solve this though As mentioned earlier your model has a weird box gap. By making the thighs muscly-er this will partially be solved. Your models lady parts need some flesh to them though, your curve upward in a continuous curve from the thigh, the thigh should meet the lady parts and then curve down in a slight bulge.

Also the front of your models stomach appears to be a half cylinder. Its not shaped. Jusding by her proportions it should be flatter to a degree on the front. I would recommend you add a belly button if only to assist with proportional development.