A little local tweak and mod.
Changing ABC - A`B`C` order in Point Align and mod for 2D placement, based on it.

Changing order gives more focus on objects during points marking - you are setting them on first object, and then you can just control where they should go, having initial point map already marked.
Maybe, also aligning B to B` instead of A to A` will be more suitable.
Can be interesting)

Is this the latest version? Thanks 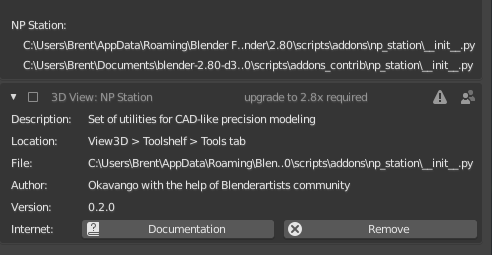 Hi 1D, Nice work and improvement !
Are you pushing those changes on github repo too ?
Could be a good idea to keep a track of work done on NP station on a single place.

did not work in b3d 2.8
i install it but is disappear in search panel

Actually, no, it is research fork)

About 2.8 - there is no sense to make 2.8 update until release.
For example, I don’t planning update our tools for a long time, partially because of my diamond donator membership, partially because grant was given for snaps improvements and it will be better to wait for 2.81

A little local tweak and mod.
Changing ABC - ABC` order in Point Align and mod for 2D placement, based on it.

Nice! I was considering a mod like this with “B” as the align point, but forgot about it. I think I got sidetracked experimenting with another “face align” idea that never went anywhere.

And it’s implemented as a modal to!

Is this the latest version?

Are you pushing those changes on github repo too ?

You have an updated version of NP Station on github?! I wish I had known earlier, I would have merged those changes in to the “official” version in addons-contrib. That is where I have pushed all my NP Station updates to.

I agree, especially with the snap improvements Mano is working on that could require API changes.

You have an updated version of NP Station on github?

Not yet, but maybe a good idea to make a guthub repo from current addon-contrib version so anyone could contribute / branch without bf commit rights ?

I was referring to this, but on second glance this seems to be a more generalized version of point_move for external use.

Now I wondering who is maintainer of NP_Station.
I thought Okavango is)

I still consider Okavango to be the main author and maintainer. I originally started as an assistant maintainer for NP Station. It’s just with Okavango having had almost no time to work on NP Station in the past several months, I have become something of a “de facto” maintainer.

This error looks interesting:
object has no attribute 'user_preferences'

If you are trying to get NP Station running on 2.80, this version of NP Station from addons_contrib is what I would recommend starting from as it has already some 2.80 updates applied:

Getting the macro setup (the foo.define('bar') code in the register functions) running right can be rather troublesome though. This is one of the reasons why I have been experimenting with a rewrite of NP Station that would use modal operators instead of macros.

Update on the experimental 2.80 version

Here is the current work-in-progress version of “point move” without macros.
Note that this is an experimental version, so it is not recommended for use on any important or production level projects. This version is also missing some features and may work a little different than the “official” 2.7x version:

This version expects LEFTCLICK to be the “point place” hotkey, but I plan to make this configurable in a future release. This is a downside to using modals in 2.80, (IIRC) it is not possible to have add-ons use the hotkey settings in user preferences.

You can still change the add-on’s hotkeys by editing these lines in the “np_point_move_wip.py” file:

We should take a look at a way to expose such settings in addon prefs.
Will try to take a look as soon as possible.
In then meantime, great work done here (as usual), thank you NBurn !!

Yeah, a built in key editor would be ideal. There’s already at least one “default” add-on with this option, mano’s snap_line_utilities. IIRC, Smart Select (commercial add-on) can also do this. Re-implementing point_move’s snap feature took more time than I expected and I had something come up, so I had not had a chance to look into how those add-ons implemented their hotkey editors yet.

thanks you , i will use your version try again. and i have used your WIP addon

. it’s important for architects to use 3d software as blender.

it’s great to hear that np station for 2.8 has updated~ it’s difficult that study python and blender API by myself.

Hi
Thanks for releasing the original NP Tool and now for 2.8
I didn’t understand how this works in v.2.8.
After using it the wrong way a couple times, I figured it out BUT
Leaves rubbish “Mesh” named objects when not used properly and must somehow attach data to those and other objects. As it turned out, in the end no matter what object I picked and even after having purged the orphan mesh objects, the command would end up moving my active camera instead of the selected object!!
Has it corrupted some data? Is it the specifics of my file.

Edit:
It works in a simple small file.
When I load my current project it messes up. It starts moving cameras regardless of what object was selected when I initialize the edit, When it moves the camera it immediately changes it to an object called “Mesh”. After it’s done destroying my cameras… it starts with other objects.

Since it does not happen with every file I decided to upload the file.
Please note the file contains a couple of commercial material images that you are not allowed to copy or use. The file is uploaded only for testing purposes and I do not imply that the source materials can be copied or used. File is about 200MB

Edit: This large and complicated file is not needed. I have reproduced the bug in much simpler file, view the following post

Hi
Thanks for releasing the original NP Tool and now for 2.8

Eek, I should have added a better disclaimer, but please do not use the “WIP” version for any serious or production level projects. It was intended only for experimental use, not as a replacement for the 2.79 version.

Yes, this was also an issue with the 2.7x version IIRC. I have not found a nice fix for this yet.

As it turned out, in the end no matter what object I picked and after having purged the orphan mesh objects, the command would end up moving my active camera instead of the selected object!!

That is very strange, I have not seen anything like that before. The WIP version should only be moving objects that were selected before the tool was run. I tried the add-on with the blend file you uploaded and it is definitely doing something that was not intended, but I am not sure what is causing that bug.

If you have a file with assets you do not want to be made public, you can also send me a link in a private message.