Or… finding a better hotkey that doesn’t override an existing, often-used one like Annotations

I think that a ctrl right click would do the job.
And if annotate tool is available in Sculpt Mode, Cursor tool should be available in Sculpt mode, too.
That does not make any sense to have an exception.
Sculpt Mode is forcing hiding of 3DCursor. User is free to hide 3DCursor in any mode.
But it is not free to show it in sculpt mode, to use it for placing annotations.

Hello!
Yesterday I decided to give blender sculpt a go. I didn’t use it much lately (lately as in the last years, aside from a couple of peaks), and with all the awesome stuff Pablo has been adding I was really curious to see how it is now.

And, although I probably just scratched the surface, the new features and the general feel of a lot of the brushes has improved a lot, and I enjoyed scultping. Until I tried to add a multires modifier 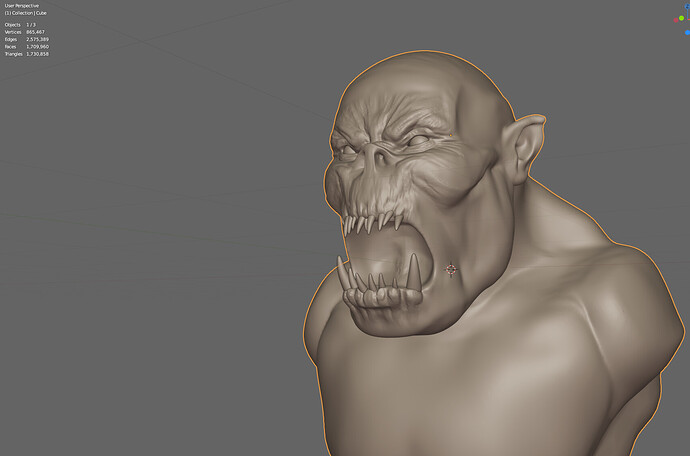 With 800k polys my computer crashed, or anyway will take ages to add the multires to the mesh. I have a 3900xt, 32gb of ram and a 3090, so I don’t think it has anything to do with hardware.
As I stated at the beginning, I love all the new stuff that Pablo added and love his work in general, but is the multires performance really that bad or is there something wrong with my system? I am on 2.92 win10 64

I would pretty much prefer a solid quadiflow remesher alternative and properly working multires modifier over all the brushes and tools pablo added over the last year or so. Lots of the features/tools are useful for HIS style of poly modeling but not for real sculptors (which he isn’t in my opinion). No hate just the truth imo.

Well ok the cloth brush and options are very cool.
Still feel like the pose brush could use some love - very weird so pose hands/fingers without using lots of face sets.
I would like to have some kind of markers which i can quickly and freely place on the mesh to use it as temporary bones or pivot points - if that makes sense.

The multires code is not in Pablo’s area of expertise though, any new commits to the core of sculptmode (Multires and Dyntopo) will likely come either from Sergey or Joseph Eager (the latter at least working actively on Dyntopo).

There has already been code put forward that would turbocharge Multires from a performance perspective, but it was never committed. Pablo has been talking with the core team about what a new system should look like, but it looks like the next big project is brush management (which draws a lot of complaints and affects the workflow at all poly counts).

Oh well a good brush management system would be a god send.

Don’t forget Sculpt Vertex Colors, the last meeting talked about making that a priority as well (as soon as the team figures out how to help users not conflate it with the normal vertex colors).

I’m using sculpt vertex color for my latest projects and it’s a great feature. It takes away the creative workflow cut which comes from the retopo and uv unwrapping process. Plus sculpt vertex painting just feels super smooth and has great performance compared to regular texture painting.

Another great feature would be to have a better performance when sculpting with eevee (it works with lower poly stuff but is not usable for high poly objects/scenes. Especial important when using sculpt vertex painting.
I always have to switch from eevee for checking the color to matcap/studio for the painting process.

not for real sculptors

to help users not conflate it with the normal vertex colors

Just to be clear, I wasn’t pointing fingers to anyone. I love the work that the devs do on blender. It was just my realization that the multires is still not really working well

I guess this has to do with general edit mode and open subdiv performance problems?

Love the Fairing brush, the improved masking and Face Set tools, the bend mode in the Pose brush and more.

I made this Donald to exercise with the Sculpt Dev build.

[metin-seven_3d-print-modeler-toy-character-designer_donald-duck-cartoon-comic-style] Created using Blender (mix of Sculpt Mode and Edit mode + modifiers). Rendered using LuxCoreRender. Based on a sketch by Mark Christiansen. Hope you like him!

is the multires performance really that bad or is there something wrong with my system?

If it crashes at 800k polys, there is probably something wrong with your system or there is something more than just multires involved.

Most of people are , at least, able to reach 3 millions and some can reach one, two or three dozens of millions of polys.
That being said, it has been frequent during 2.8 and 2.9 series, to see newly introduced features, not immediately supported by multires modifier.
Ace_Dragon already said it. Other developers are involved.
So, there is a latency about when new stuff is supported in multires.
Just saving .blend file after addition of modifier should solve several of annoyances.
Most of times, users have been warned in release notes that a feature is not supported by multires modifier.

But it is always possible to discover an unknown bug.

If it crash at 800k polys, there is probably something wrong with your system or there is a something more than just multires involved.

Most of people are , at least, able to reach 3 millions and some can reach one, two or three dozens of millions of polys.

Yep - my system is getting on for 6 years old and it wasn’t absolutely top of the line when I bought it - Core i7 5930k, 32gb Ram and a single 980Ti graphics card. My biggest sculpt to date is 2.6 million triangles and aside from a couple of brushes being a little sluggish, I don’t think I have had a crash yet.

Dunno… it might be because i previously decimated the mesh with vertex group. I have the feeling that the mesh not being uniformly dense might not help. My system works usually well, I don’t see why it should have problems here. If i multires a sphere i can go much higher, but i guess that’s not a real world situation. Same mesh in zbrush obviously subdivided in an instant up to many millions polys.

I would like to stress again the fact that I don’t wanna throw empty critics to the devs, i love blender, i use it daily for my work and i think it’s awesome. There are still areas that are lacking however, that’s all… the multires i feel is still not really there for production use

If i multires a sphere i can go much higher, but i guess that’s not a real world situation.

Well. A sphere with a regular geometry is probably closer to a real world situation than a mesh with a chaotic topology.
Multires modifier is supposed to be used with a clean mesh issued of a retopology process.

Modifier is supposed to handle a topology containing some triangles or Ngons.
But a decimation can produce degenerated faces and loose geometry.
That does not mean that a crash should be expected.
Just, that this scenario may be out of usual workflow.

Yeah i guess you have a point. However seeing how it’s possible to handle the same mesh (zbrush or 3d coat) there’s definitely room for improvement

This should be already by default in Blender for any new user.

That’s why i like Zbrush, essential and new features already included, most of the time as free updates.