A simple Pistol, made low poly, for the Blender Game Engine, with GLSL graphics. Uses a color, normal, specular, occlusion, hdr reflection, and tiled normal maps. (My laptop only gets about 9 fps on this, but it’s not a very high end laptop.) EDIT:
Some colorful photoshop edits of my renders. 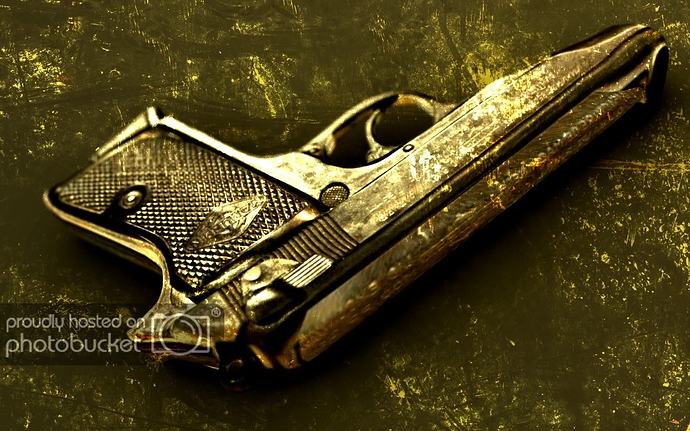 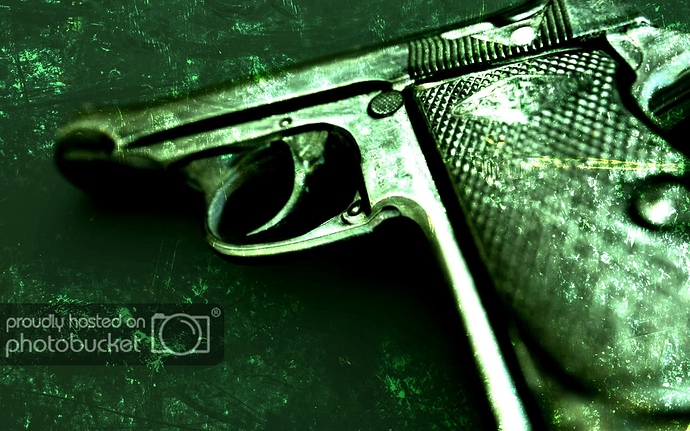 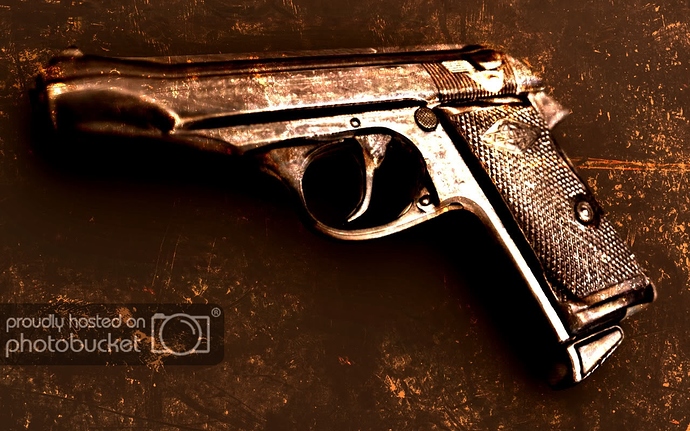 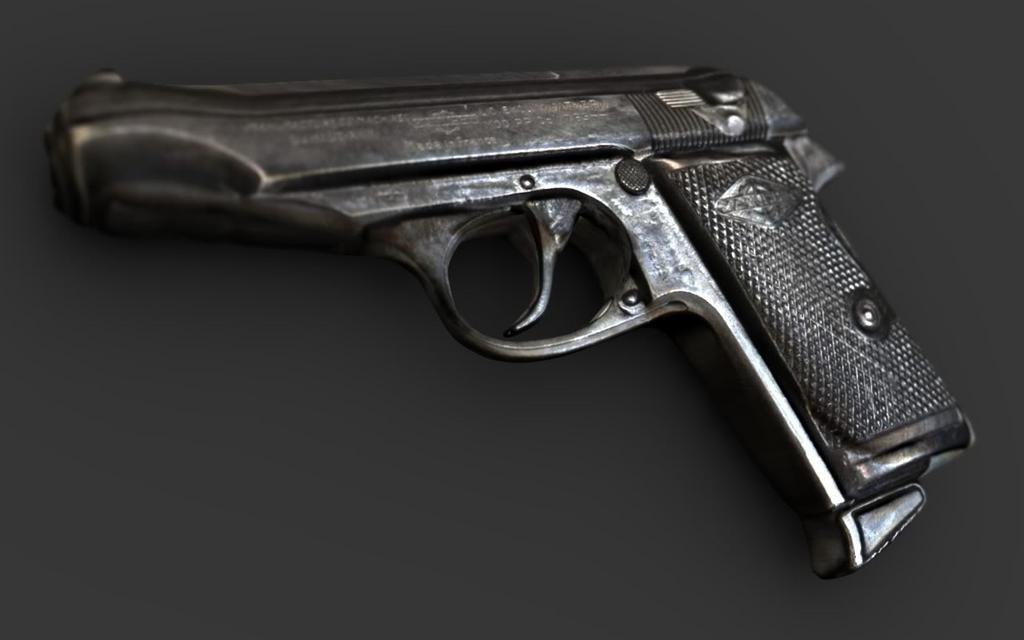 That is mighty impressive

It looks very good from the angles you have it. However, it appears (unless that is a very strange gun) the modeling is not holding a candle up to the texturing. Usually its the opposite and I must say, it’s a welcom change because I’d much rather have bad polygons and good textures than vice versa. The barrel looks squarish? Not sure if that’s how it’s supposed to be. The whole model looks kind of blocky flat from the back and front. (but, again, I guees this could just be the particular weapon model you’ve chosen).
If this is a gun for a first person game, and the player will be holding the gun, the most important part of the entire model (and the place where you should invest most of your time) would be the back of the gun from the angle that it would be to the player in an FPS. But you didn’t show us that part, and judging from the small parts I can see in the turnable, that’s where you’ve cut a giant abtrusive seem for the UVs.
Also, I’d think you’re current mesh with 2 levels of subsurf would be pretty darn heavy for realtime. I don’t think you should be using subsurf for a hard surface model in a game engine. Use all those extra polys not to interpolate, but to add detail. This is all just my opinions.

Still, wonderful job. The stuff you create is great. Keep it up.

With a little more modeling work, that, could execute a very SICK High Poly Model. Your texturing methods are excelled! Great Job!

are the beauty renders from the Game Engine or Blender Internal?

@OrchidFace
The modeling was originally more high poly, but I decided that it would be best to bake those normals and move on to a lower poly version. I’ll admit, it doesn’t look as nice, but it’s much more suited for games. The UV seam is actually on the front casing, but I did put a physical seam in the texture on that back, so I think that might be what you’re seeing.
Also, I just subsurfed for those renders and the screenshot, because the edges were a bit jagged, closeup. If I was to use this in a game, I would go with the low poly version.

are the beauty renders from the Game Engine or Blender Internal?

They’re from Blender Internal. But it was a bare bones render. The AO was baked, and shadow calculation and raytracing were turned off. I really just did those in BI for the antialiasing and compositing, cause as a raw render they look about the same.

How did you go about texturing this model? Could you link the Color map?

My guess is that you changed the model to low-poly by running a script that reduces the polycount. It results in very unattractive (and often useless) models. I could be wrong

The best method to achieve an accurate low-poly version of a mode is re-topology, and in Blender that’s super easy to do

Check out some tutorials, and this gun will really kick ass

Looks superb to me!

As far as my visual tastes can tell, this is one amazing work of art! And very intelligent in that sense. Btw, the red-toned image looks great!

Great job on texturing and materials.

How did you go about texturing this model? Could you link the Color map?

Most of the main texture was based off of cleaned up versions of my of my reference photos. Here. I’m posting from my school computer now, but I’ll try and get up a texture sheet eventually.

My guess is that you changed the model to low-poly by running a script that reduces the polycount. It results in very unattractive (and often useless) models. I could be wrong

The best method to achieve an accurate low-poly version of a mode is re-topology, and in Blender that’s super easy to do

Check out some tutorials, and this gun will really kick ass

I did, but I think it turned out pretty well. I did also take the time to go over the optimized mesh and get rid of any unwanted artifacts of the process. Triangles and rough meshes usually aren’t as frowned upon in game art, I think and I like the way it turned out.

Oh, just glanced at the finished projects section and saw that this thread was back up.

The gun model looks good and especially the texture looks very high quality. The front of the gun just seems bent to me, what happened there?

i love it!
like the textures to, where did you get them + are they free?