[Puzzle] HaZZard (update: The start of a new feature)

I’m making a puzzle game where you have to push boxes into water to go over them, find coloured chips to open doors with the same colour, avoid enemies and many other challenges.

Object of the game:
You have to collect all the batteries that are scattered all over the level to open the exitgate which teleports you to another level

Story:
Haven’t thought of this so far… I’m thinking of making the player a robot which you can “update” by collecting an IceSkateChip (walk on ice), HeatShieldChip (walk over fire) or BoatChip (walk on water). These updates work only on the level they are collected in.

I started this game after remembering an old Atari Lynx game “Chip’s Challenge”. 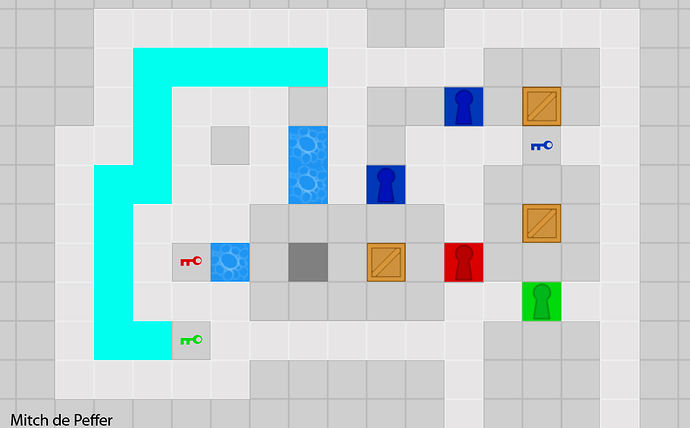 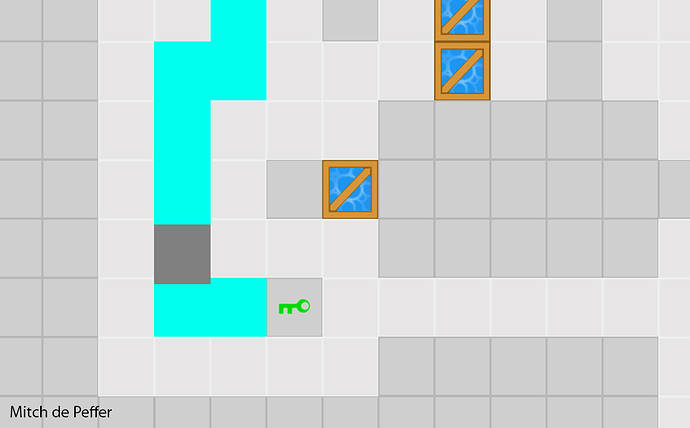 A video of the current progress:

You can enhance it with little animations, sounds, menu , but I guess you’ve already thought about it. So go on and surprise us with new looks next time! Good job!

this is sweet! ya i agree with goh you could enhance it a little with the visuals and sounds but still cool.

That’s why it’s the WIP-section guys

I want to keep the style simple and a bit like the original game.
The sounds are gonna be 8-bit(isch), same with the gui.

I have a question:
When I change the colour of the Text like the way discribed here: http://www.tutorialsforblender3d.com/GameDoc/Text/Text_Multitexture_Steps_5.html
the text is sometimes coloured, but when I move the camera, it becomes white again (maybe because I use an orthographic camera). Is there another way to change the colour of the text? (I tried changing the colour of the characters in the .TGA file itself, but then the text-thing doesn’t work anymore)

Guys, I need you opinions:
To stay true to the original graphics, I beveled the walls, locks and boxes a bit. But I can’t decide wether it looks good or not… 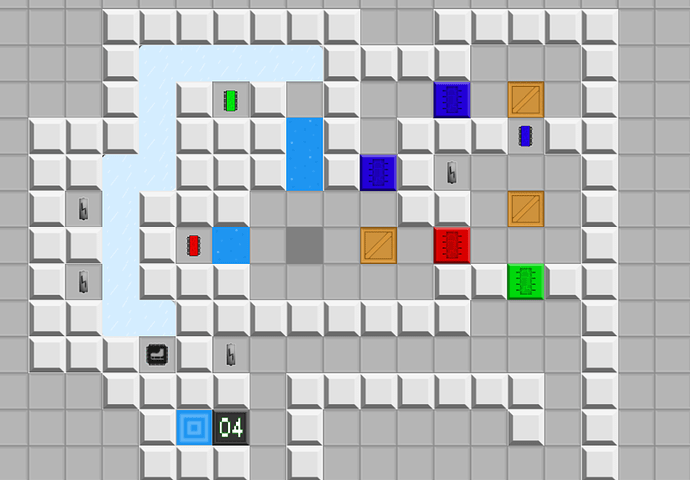 I liked the original graphics better. New ones look too much like minesweeper

I would make the walls darker and the floor lighter. I would also leep the beveled walls, but with the darker color.

From watching the video, I think the player is a little…boring. I guess it’s just personal taste though. This is turning out quite nice, keep it up! 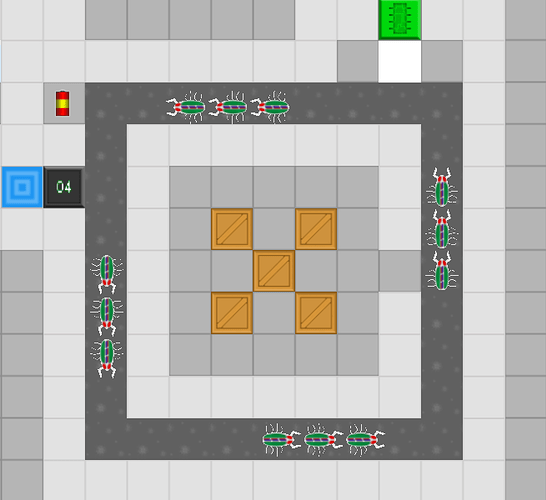 Made the first enemies today. They just follow the trail, so you just have to avoid them
(the scissors in front of them and their legs move).

You can also see the new battery texture in this screenshot.

From watching the video, I think the player is a little…boring. I guess it’s just personal taste though. This is turning out quite nice, keep it up! 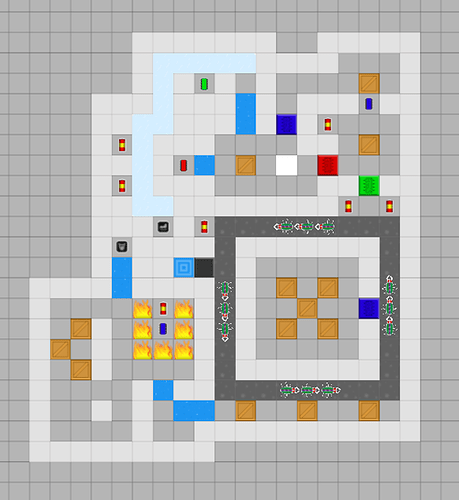 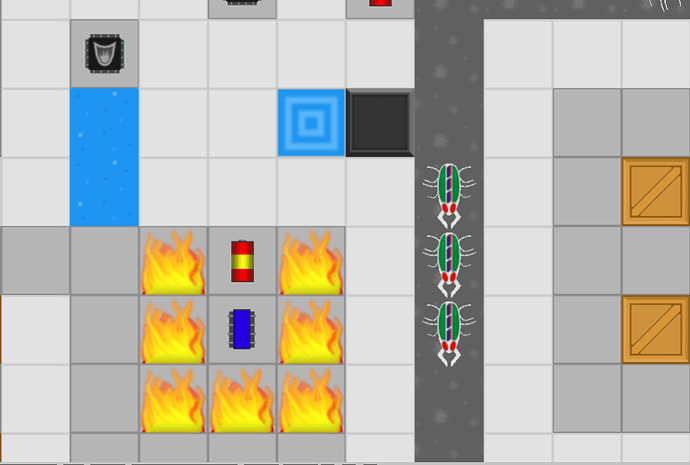 I would suggest adding harder and easier levels, and perhaps a tutorial for the game (obviously it’s still WIP, but a suggestion), because I cannot figure out half of what’s going on.

Also, when moving the crates into the water to go over them, they should change colour, maybe a slight tinge of blue to indicate that is is in the water?

this would make a hit! mobile game but considering i dont have a smart phone i would still play it on a pc.

EDIT: also maybe allow texture packs like in minecraft so basicaly someone can make there own name all the textures the same as the orginal textures but just go in make a copy of the orignal textures then the delete the orignal and replace them with the custom ones, i think blender will load them because they are the same name.

EDIT: nvm think because you have to pack the images for runtime so forget that idea.

EDIT: nvm think because you have to pack the images for runtime so forget that idea.

If I don’t pack the textures, but place them next to the blend (exe) file or in a folder (relative paths) it should be possible (you don’t have to pack the textures that way),
so this idea is possible… Maybe i’ll give it a thought. Interresting idea.

I would suggest adding harder and easier levels, and perhaps a tutorial for the game (obviously it’s still WIP, but a suggestion), because I cannot figure out half of what’s going on.

The first levels are going to be simple tutorial levels. Then the levels slowly get harder (you begin with only the boxpushin challenges, then I’ll introduce the doors, after that the enemies etc.) so it won’t be a steep learning curve.
What I’m making now is just a level to test the different element. This isn’t going to be a real level (or maybe it will be, but in the last half of the game).

Also, when moving the crates into the water to go over them, they should change colour, maybe a slight tinge of blue to indicate that is is in the water?

You are right on that. The textures as they are now are just the first versions of the textures, I’m open to suggestions. Thanks for the advice.

Some texture changes this time: 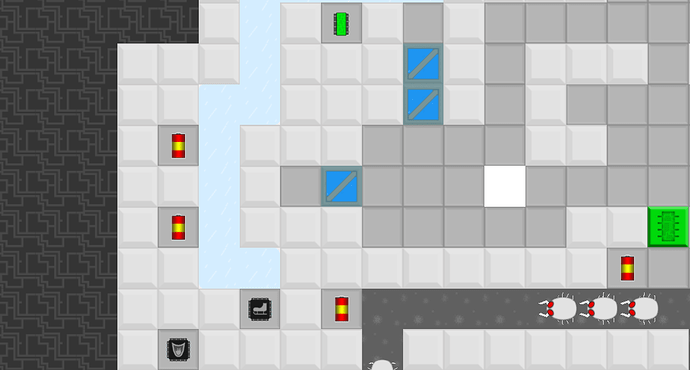 I made a working HUD and the fire/water/enemies kill you now.

I’m sorry for the lag in the video, my screenrecorder failed at keeping the fps smooth (when I played this, the framerate didn’t drop from 60 fps).

I haven’t made a deathanimation yet. Not sure how I’m going to do that visually. Maybe just a little splash like the original game.

I made working transport belts today.
You’ll travel in the direction the arrows are going when you step on them. You can change lanes to get to certain areas.
When you get the magnetBootChip, you’ll be able to walk over the transport belts.

I’m still not sure what to do with the deathanimation. Suggestions are welcome!

How about making the cube turn red, and sort of jump in the air and shrink - like the way these jump, but get smaller as it jumps and turn red, then expand as it “blows up” 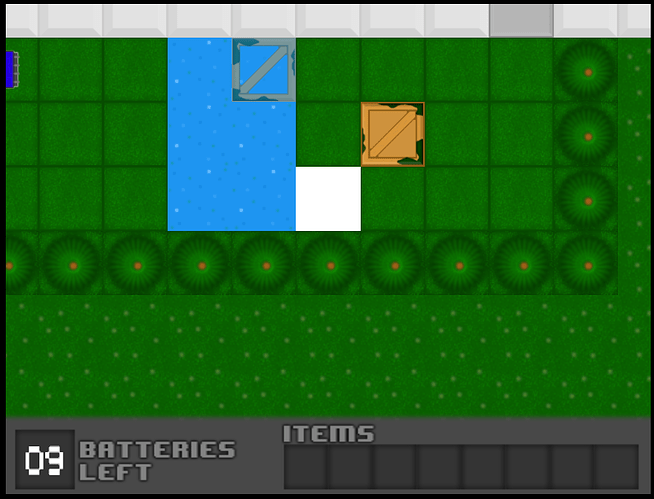 The player is going to be a badass-looking terminator-like cube and the guards are going to be rolling balls with gaurdcostumes.
The startinglevels are going to be in the garden of the castle where you get help from a distance via wireless communication (tutorials). After that you go into the castle and you’re on your own.

I don’t know if I’m going to keep the batteries because they have no role in the story. Maybe the player has to pick up an amount of keys to unlock the exitdoor.

I’m still working on this…

This time I made some changes in textures, and added another feature.
But first, another screen to show off my outdoor-tiles: