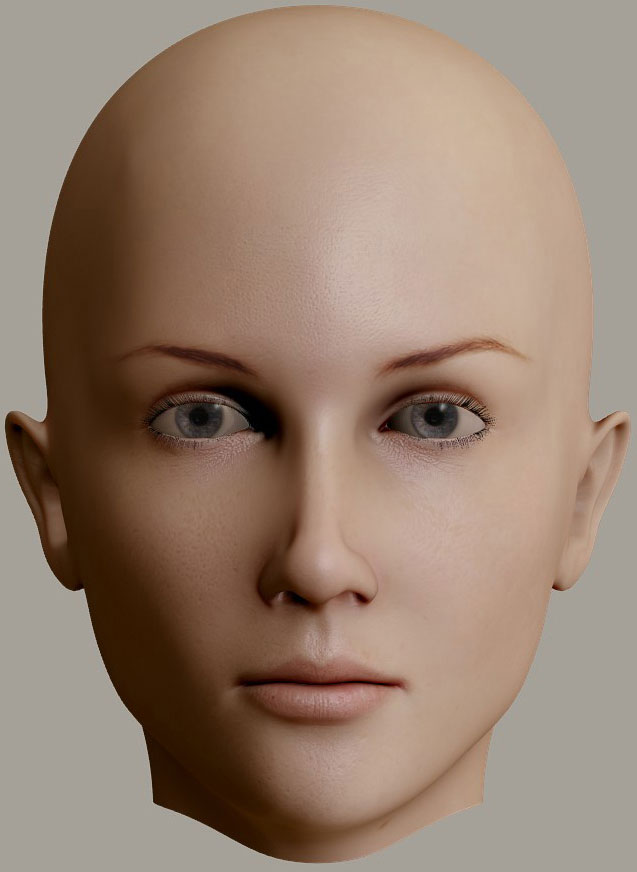 With post 500 I give something back to the community that has helped me come this far with Blender! It’s a photo based texturing tutorial, specifically using the example of a female face, although the methods can be used to texture most things one way or another.

http://www.bendansie.com/HeadTutorial/BD_BlenderHumans.html - tutorial, many images, but optimised

I did the tutorial using 4k, but the above render was made using the 2k ones anyway. Note that hitting render on this file will produce a slightly different result as I used a HDRI that wasn’t free, so couldn’t be re-distributed. Also, the eyeballs dont behave as well in 2.46 as the build I was using. (Probably a simple tweaking matter, but the tutorial is all about the skin anyway.)

I can upload the .blend file not in an archive, but it is around 53mb. Also, I might generate the tutorial in .pdf form at a later date for download simplicity.

Also of note, this is my first tutorial on this scale, so there is bound to be room for improvement. I am quite happy with it for now, but there may be future revisions later on.

it’s very good(certainly with the standard of the forums here) and thanks for the tutorial. But i think the realism could be pushed further.I guess the sss shader isn’t working the best, and also hair/background would maybe show if the face is realistic.The eyes seem for me to be too much close to each other, and the top part of ears is weird, maybe because of weak sss, but also the ears start is too artificialy smooth.

nice man but the eyes need little work i think you should use procedurals for that lol man whered you get the skin texture from daz? they have some good textures

Thanks for the hints. The main focus here is the quality of the skin. blenderrendegade - I made the skin textures myself and the tutorial shows how.

cool nice skin texture but one question if i may you textured this using zbrush or blender? i noticed that on your portfolio demoreel it says zbrush are there two different versions of this file? i mean if so it could help us see which ones better the one from zbrush or one from blender

This one is done using open source all the way* (basically. I finished it off in windows and photoshop for speed’s sake.) Effectively it can be done using only Gimp and Blender. I redid the head texture since that reel completely and documented the process in the tutorial. 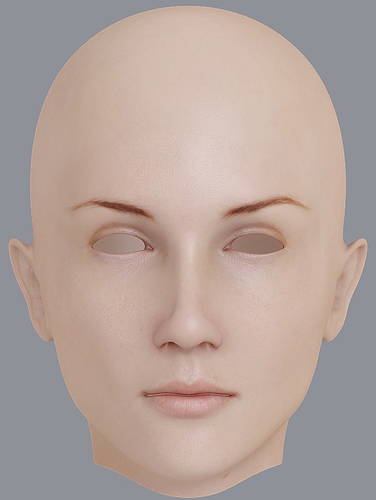 This render is just the skin with plain AO and one spotlight.

BenDansie, this is sure to become a classic. Looks great.

I really like this, and I really like you’re writing style in the tutorial. Would you mind trying something? Could you use the bump-map as a hard-map? You see I always find it’s the use of bump-maps (unless it’s for wrinkles or vains) that make CGI faces look CGI. Though skin is not entirely flat it sort of - has a softer surface than bump-maps give it.

Really nice and well done. The texture baking section is truely usefull, Thanks.

I have just got some time to look at the tutorial, and my first impression is that its really something amazing! Thank you for all the time and work you put into this, it shows.

Thanks all for your delightful comments! It took quite some time to write, so the positive feedback means a lot.

yogyog - Thanks for commenting on my writing style, it’s nice to know in case I write another tutorial on something else later on. As for the bump maps, it is possible to set the SSS to ‘blur’ the textures as well as the colour/lighting. In this way you can soften the bump map. I’m not familiar with the term hard map. Do you mean displacement mapping? I have tried a fair bit of that using Zbrush and Blender, but Blender (at the moment) basically needs subdivision modifiers to make use of displacement, and to get to the level of pores, you would need at least 2 million or more polys for this type of face. The render time would probably be horrendous using this node setup, and thats if it didnt crash my computer due to memory issues. (2GB limit or so.)

If a hard map means something different, could someone enlighten me? Always on the lookout to learn new tricks.

Hi, I just skimmed over your tutorial and it looks like it’ll be a great help to me, thank you very much!

By hard map I mean mapping to the hard value of the specular shader, effecting the area that is effected by the specular shade. For fine-level textures this works very like a bump map, just slightly different. My own attempts at realistic skin shading (I once had to create a mask in Blender so a live-action actor had no face) found that this worked better than a bump-map and renders faster. Totally different from displacement mapping!

yogyog - Rightio, I follow you now. Might need some experimenting, but later on because I have other projects coming up that I sort of put to the side to finish this… It’s funny, you can use Blender for years and just completely ignore certain features until someone tells you about them.

Everyone - if people want to post their results in this thread after using the tutorial, I don’t mind. I wont feel like the thread has been hijacked. I browse through the WIP and Focused Critique sections fairly regularly too. It’s all about bouncing knowledge off each other…

wow bendansie, you have finished your tutorial! i have read it when it was wip and only halfway finished and now im eager to continue reading. many thanks for sharing some excellent techniques!

Amazing! But Unfortunately not photorealistic…

Even if I don’t like much that kind of things you have done a good job BenDansie.
For me you should focus more on the modelling,the mesh doesn’t seems much realistic(I know it’s difficoult,I don’t want to be harsh,I appreciate people trying to do difficoult things:)),probably you can improve it.
The shading it’s not bad .
Bye
Renderdemon

this is one hell of a nice tutorial. will be usefull to me someday. Thanks!