Aiming at a compromise between realism, render-times and awesomeness… it’s for animation, y’see…

Using low-res environment maps instead of ray-tracing and I’m starting to replace normal-maps with hard-maps (effects the hard value of the specular - great underused technique), 1-level ambient occupation set to subtract provides dirt more than shadow, but it may kind-of sizzle during animation . . . could change to AAO at some point. Current render time 18 seconds on a middle-aged laptop. Did you know that if you turn off the shadows button in the render options it turns off AO? That was really confusing me.

Quick-quiz: where did I use sculpt mode?

Some materials from blender-materials.org - all edited. 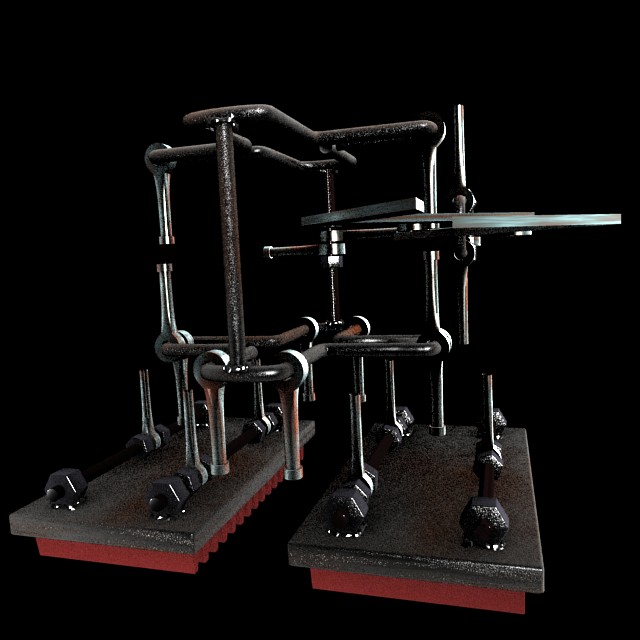 looks great! you used sculpting for the welding seams…could you put at least a little animation on youtube so we can imagine it?

well done in the quiz there!

I can do a video rotation of it… but I kind of need to rig it first. but it won’t make sense yet anyway: there are a lot of pistons that are still in halves and won’t join together until I rig it.

I was going to use a mobile phone for the brain / eye / voice / ear and I need to come up with some kind of engine that can power 16 hydraulic pistons. the whole robot is about 12" / 30cm high.

An amazing contraption. Likewise I’d like to know what’s it for.

This it what it will look like with the pistons connected together properly. Note: two feet, two hands and a body.

Unfortunately the next update the pistons will be back again.

Yet to do: head, phone, light bulbs, hydraulic engine

Any idea what a hydraulic engine the size of a game-cube designed to control 16 pistons would look like? 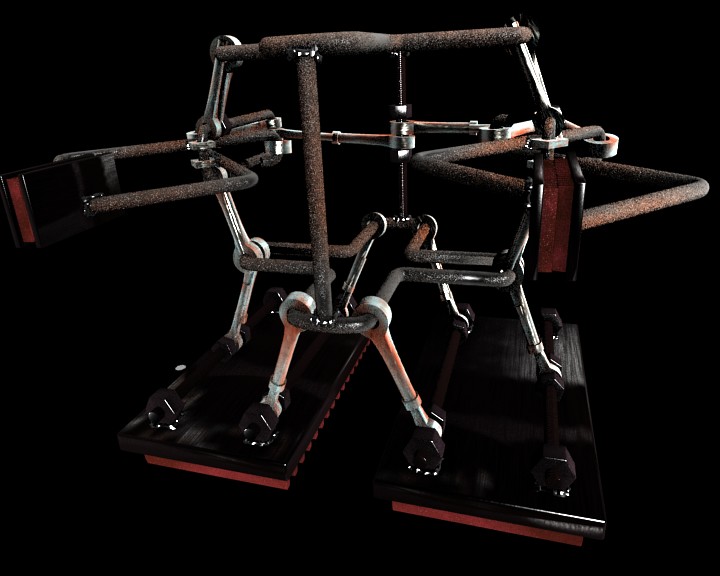 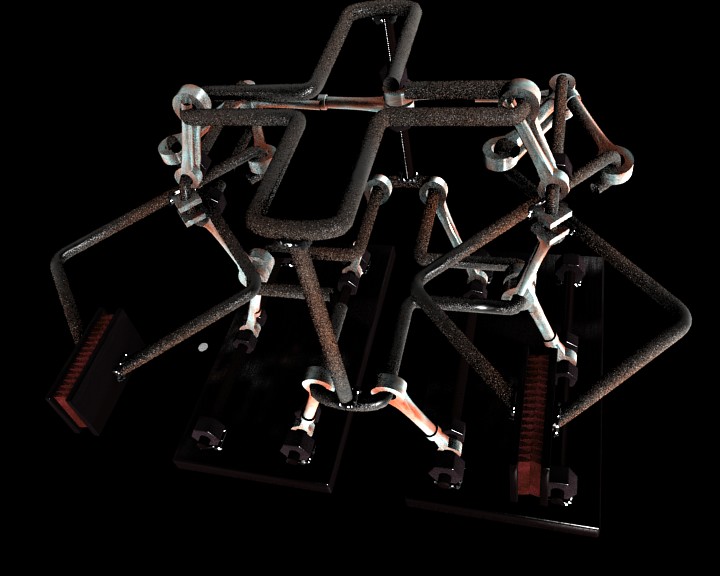 Thanks Crispin. Where did that image come from? should the pipes to the pistons come out of the square bit or the top pipe or the pipe on the end? Is that for one piston or all 16? Thanks for the help anyway - really good.

my guess is, the pipe on the end is for waste, and the one on top is to the pistons. I actually have no idea how a hydraulic engine works, but that’s my guess at how it would look. I made that with the idea in mind that all 16 pistons run off it. Of course, that isn’t realistic, but really you can do whatever you want in Blender :).

Been a mechanic/blacksmith for 30 odd years… before finding Blender in 2001…then…as you can guess …everything changed…
Does the motor/pump need to fit in center section? individual lines for each piston ? or log with branches?..would be fun…maybe I’ll putter around with it tonight…ya never know

Nice. I hope this is fairly plausible looking. Actually I think 3 pistons alone controlling the positions of the feet / hands doesn’t really work.

Does the motor/pump need to fit in centre section? individual lines for each piston ? or log with branches?..would be fun…maybe I’ll putter around with it tonight…ya never know

nice one, nice one. apart from two pairs each piston will have to be controlled individually, and yes, it’s meant to go in that centre section. I know how to rig a second set of pistons that compress / decompress with each of the other pistons if you think that’d be good.

Frank The Smith has emailed me a fully built engine model! What a dude! Frank, you’re well kind! I’ll start putting it together tomorrow. 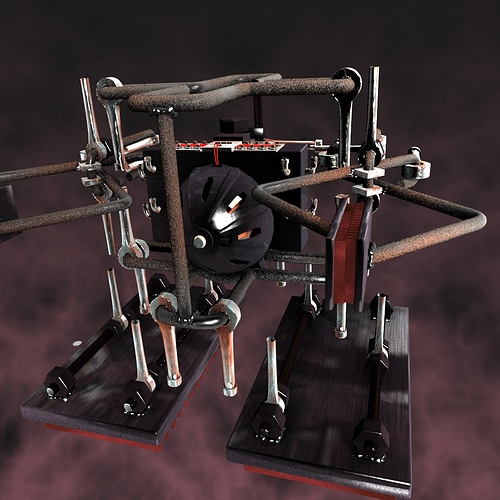 Frank’s pump scaled up to fit better, and the arms now rigged. Next, to rig the legs. Then animate.

This could be described as diesel-punk. 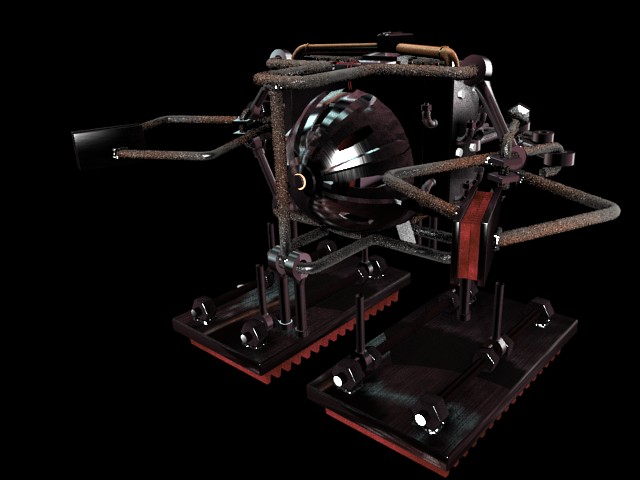 that looks great! I’m keeping an eye on this one.

At last an update! It’s kind of embarising how much better Fank The Smith’s moddeling is than my own… modelling has never been my strong-point. Now we have pipes going to the pistons. I was thinking of soft-bodying the cables so they swing as it walks, but i don’t think that’ll work.

Had an idea about the video: animating it walking through decrepid, post-industreal Sheffield (photo backgrounds), carying a letter . It’s tired. It’s trudging for miles. It finally gets to this guy sat at a table (live action) and passes him the letter, which is by now dog-eared and slightly damp. The guy opens the letter and reads: