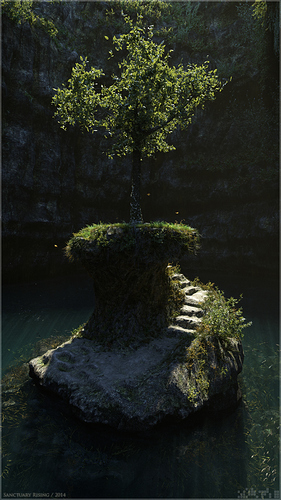 What started off as a one of those tests/doodles that “I’ll only spend a few minutes on” received a bit more of my time than originally planned. There are a number of things I would improve should I do a print quality render in the future, but I also have to move on to other projects. 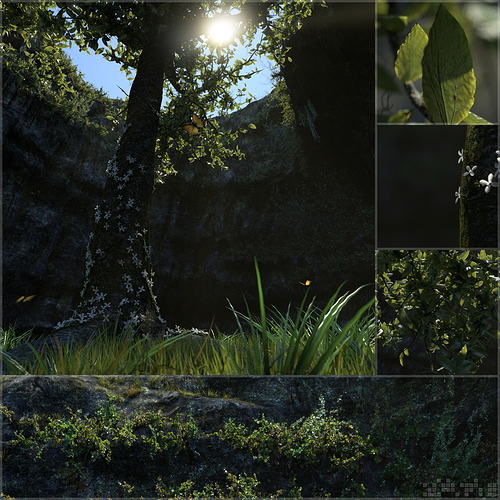 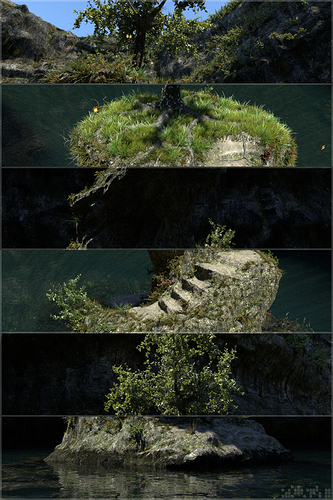 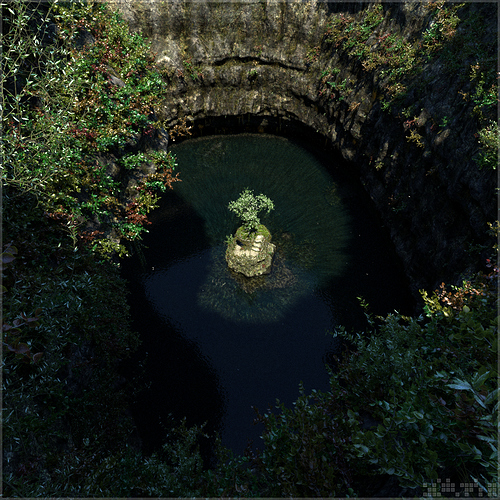 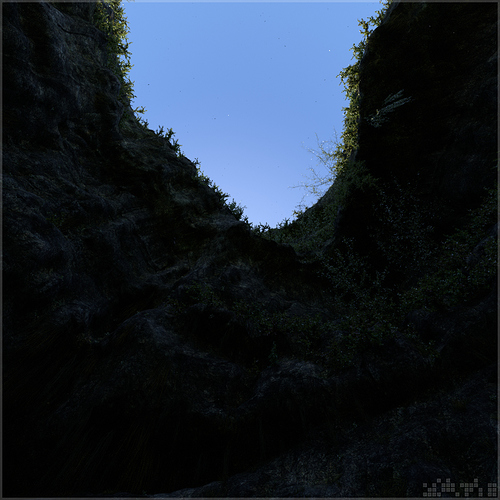 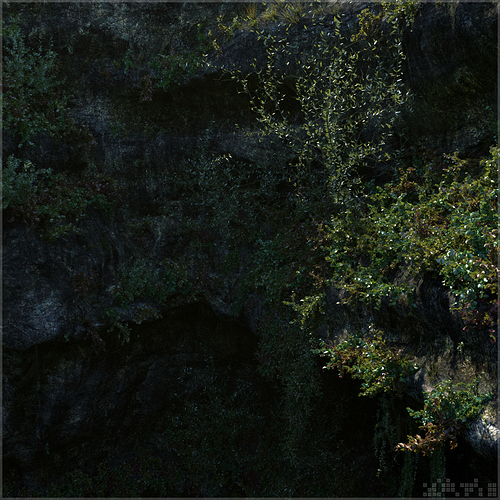 The ambience is stunning, it really has the appearance of a secluded grotto that’s been abandoned for many years.

The floating particles and leaves along with the blossoms on the tree really add that extra touch to give it an excellent quality. Good work.

EDIT: Just noticed you posted extra shots, you really seemed to have gone the extra mile in making an entire world to explore (a small space for sure, but with a ton of detail). How much memory was used here?

That is seriously one of the best nature renders I have ever seen! The only thing that popped out is that the textures look a little low-res, but other than that, it’s amazing. My vote for the feature row!

Thanks for the kind words Ace! When I first started this I was just playing around with dynatopo and some random rock textures I made in photoshop. It started with the small island in the center. Then the time vacuum kept on.

@Benjamin Dod: Thanks much! Yeah the textures on the cliff, tree, and bushes look good at medium distance or further. Never actually intended to do alternate shots, much less, zoomed ones. The render in the first post was all I had planned. Most surfaces don’t have detail textures/detail displacement. As I said this is something I may revisit in the future to do print quality renders.

WOW.
This definitely deserves more attention.
I agree that on close inspection it falls apart, but it is rare to find CG that doesnt.
extremely inspiring.
EDIT:Knew it! congrats on gallery

That is insanely reallistic, it looks absolutely amazing. I’m actually sitting stunned by it. Maybe some additional blending of roots and the ground would be nice but it’s great.

That’s some truly amazing work, there! The instant I first saw that first image, I thought: “that looks almost exactly like an environment I’d want in Starfall.”

What started off as a one of those tests/doodles that “I’ll only spend a few minutes on” received a bit more of my time than originally planned. .

what a test. Congrats, I think nature is one of the hardest thing to create and your renders are stunning. Very nice mood and colours.

Wow!! This is a question i usually ask in this cases…how was done the vegetation? (trees especially)

Brilliant work, SynaGl0w! The modeling, texturing, and lighting are really something else! Everything really works together well to create a little world that is simultaneously realistic and fantastic! Far beyond my abilities, this will surely reach the top row. Amazing work!

Did you sketch out what you wanted it to look like, or just go at it with a mental picture?

Wow! Thanks guys! Glad you enjoy!

In terms of memory, the usage that Cycles displayed in the render window was about 3600 MB, but Blender itself peaked at about 18000 MB in task manager during the pre-render phase (BVH building, transformations, etc.). For some of the other renders Cycles went as high as 4500 MB. When not rendering Blender was using a little above 6 GB. When I started this, rendering was on GPU (GTX680/4GB), but then there came a point where the GPU and CPU speed gap closed enough that I just started using CPU. Also needed volume for the water. The top render was 1000 SPP. The others vary between 200 and 400 SPP. 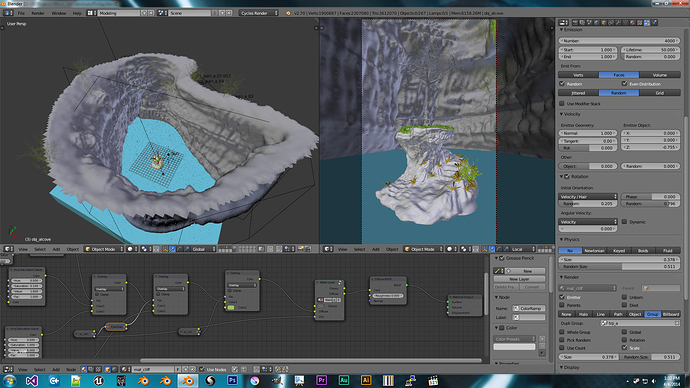 I can only have a certain number of particle systems visible in the viewport, otherwise lag takes over. There was also a few types of particles that would not instance properly in the viewport. Adding only 20 of the particles caused the viewport to be unusable. Almost like those 20 particle meshes (which had no modifiers or physics btw) turned into an ungodly number of draw calls. The instancing worked fine for the cycles render.

Center tree with roots was a skin modifier with a whole lot of tweaking. Some of the smaller branch bits were made in ngPlant and the rest was simple particle systems with hair, leaves, etc.

@James Candy: All made up as I went. No sketch or planning.

This is quite awesome. The extra shots and the nice presentation really takes it to the next level