This spaceship provides food, tools and in case of emergencies medical care to astronauts and workers in the asteroid belt mines. In the cargo area there is a cryogenic facility to frozen a human until the ship gets to a hospital.

These are the sketches and the first version of the model.

The external engines provides both propulsion and position correction. At the back there is a nuclear fusion engine used to accelerate for long distances.

What do you think? C & C welcome, please. 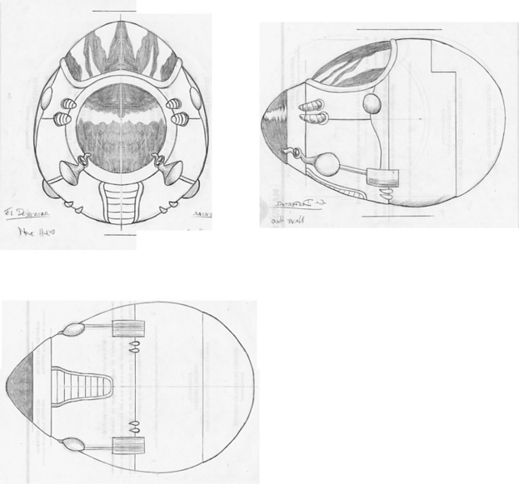 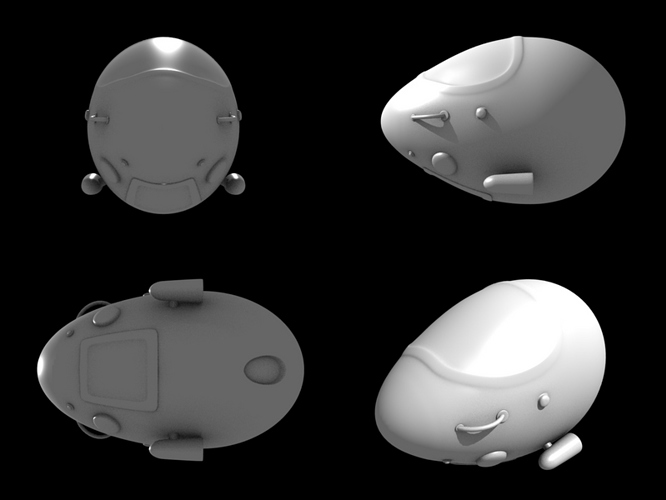 The model look good.
Is this a one man craft or is it a large cargo ship? The Windshield makes it look very small.
Is there a special reason of the egg shape of the craft?

The model look good.
Is this a one man craft or is it a large cargo ship? The Windshield makes it look very small.
Is there a special reason of the egg shape of the craft?

Thanks. It is a small cargo ship but not so small. You are right about the “windshield”, that’s the first thing I have to adjust.

Yes. It doesn’t need an aerodynamic shape for it always flies in the space, never in a planet with atmosphere. And the egg, as mother nature teaches, is a good shape for a container.

The other reason is dramatic. It will be used for a man who believes he will save human kind, the egg represents the rebirth of humanity.

Cool, Since the ship so resembled an egg, I figure there was a deeper meaning to it.

Reduced the cockpit size and fixed some details. IMHO much better but there are yet things to improve. 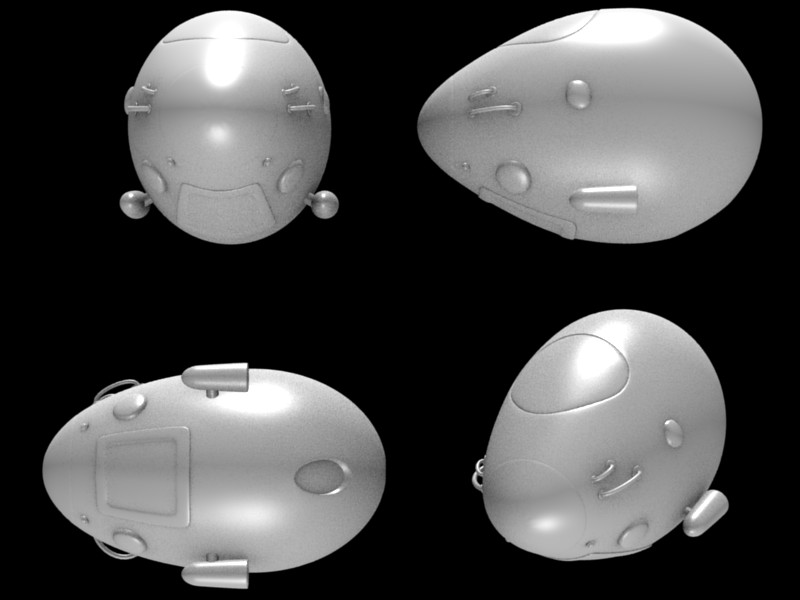 That is looking good so far. Cute. Keep it coming.

Two things I wonder about. First the window, shouldn’t it be inset more or have some type of retaining ring. Space craft windows tend to be very thick. Second, how does this thing land? There is no obvious place where landing gear would descend from.

I’d guess something working the asteroid belt would need a lot of radar or video greeble all around the ship, to detect any rocks moving it’s way. On a related note, the quickest way to avoid those rocks would be to move to one side, so thrusters pointing perpendicular to the line of motion would be useful.

On a related note, the quickest way to avoid those rocks would be to move to one side, so thrusters pointing perpendicular to the line of motion would be useful.

Well, that turns out to be an interesting question.

First off, spaceships are not arrows, that is, the nose of a spacecraft may not necessarily be pointing at the line of motion. Once the engines are shut off, the spacecraft can spin to any orientation it desired, while still moving in a straight line. It can move sideways in space, in other words.

Secondly, due to the complicated way that objects move in space, it is easy to avoid meteors and asteroids. If one is on collision course, all you have to do is do a burn to change your spacecraft’s velocity, in any direction. It does not have to be perpendicular to the line of motion.
http://www.projectrho.com/rocket/rocket3g.html#meteors

The main thing that bothers me about the spacecraft is something that will probably not bother anybody else. Specifically, while thrusting, the pilot will feel like “down” is the direction the thrust is going, and the nose will be pointed “up”. But since every other spacecraft in movies and TV suffers from this inaccuracy, you can get away with doing it as well.

The axis of thrust of all the rockets has to pass through the spacecraft’s center of gravity. Otherwise the spacecraft will tumble when you turn on the rockets. This means that the main fusion drive should probably be in the center of the aft end of the ship, instead of at the lower aft.

And a line connecting the two external engines has to pass through the ship’s direction of flight. This means they should be on opposites sides of the ship instead of below. Alternatively you could add a third external engine on the “top”, so from front view the three engines formed an equilateral triangle.

I am unsure as to the size of the ship. Is it just slightly larger than a man, or is it a titanic egg with a huge front window? An external door and/or ladder would help establish a scale.

I agree with Orinoco that it could use a radar dish.

You might want to add attitude jet clusters aka “Reaction Control System” or RCS.
go to
http://www.projectrho.com/rocket/rocket3m.html
and scroll down to “Things get real nasty if the ship is a tumbling pigeon”. In the pod with arms, the RCS can be seen on the right.
Also go to
http://www.projectrho.com/rocket/rocket3ad.html
and scroll down to “How does the pilot aim the ship?”

The ship technically should have a section of hull with ridges to act as a heat radiator, but this can be ignored.

the windsheild thingy still makes it look a little small, as you said, there is a cryogenic chamber and fusion engines and such…my suggestion would be to have a long windsheild (that is small in comparison to the ship) and split it up so it looks like you have a series of windows…did you understand what i just said? if you didnt, sorry

really cool can i see the wireframe

How about adding some artifacts to the ship that resemble human size like a door hatch or something. This will put the rest of the ship into scale.

Here you can see the intended human scale. The windshield is wide to allow better exploration and the crew can stand in a "comfortable position" when the nuclear fusion engine is accelerating the ship.

DichotomyMatt, the huge retaining ring of the first version made the ship look too cartoony. I am sure future high technology will make things look simpler. Remember A. C. Clarke third law, “Any sufficiently advanced technology is indistinguishable from magic.”

Thank you all for your c&cs. Working on the other details, stay tuned! 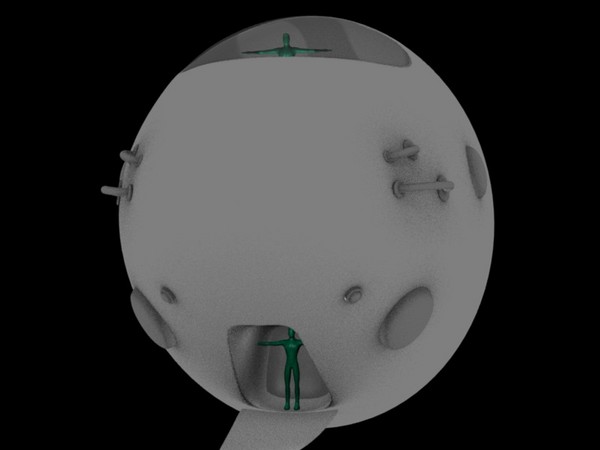 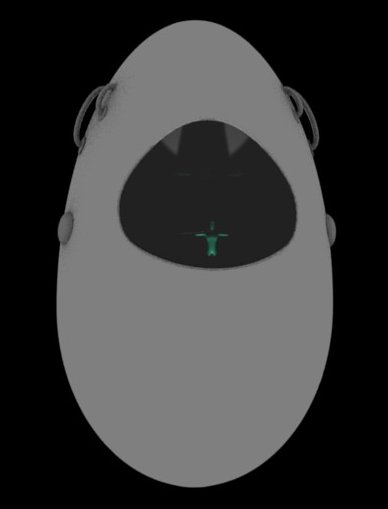 Great the last time I saw little green men getting out of an egg shaped space craft, I blacked-out, woke up three days later, could not remember my name and my ass hurt.

On a serious note the scale makes much more sense now, and I am all for the “suspension of disbelief” when it come to sci-fi stuff.

Much better, Naturalpainter! It is looking very nice.

As sugested by Nyrath, I moved the main engine in the center of the aft end of the ship, surrounded by a radiator surface. I am not yet happy with the look of this radiator.

The ship uses 4 reaction wheels to aim itself, distributed in the edges of an imaginary tetrahedron, two of them visible outside.

The external small engines are now in the axis of the ship. Still not very happy with their look, but most part of the engineering is almost done, only missing details like radar and radio antennas. I asume they should be movile but I like to think on high technology as apparently simple as that in nature, like the sonar sensor in dolphins.

Thanks for the encouraging coments. Please keep the c&c’s. :eyebrowlift: 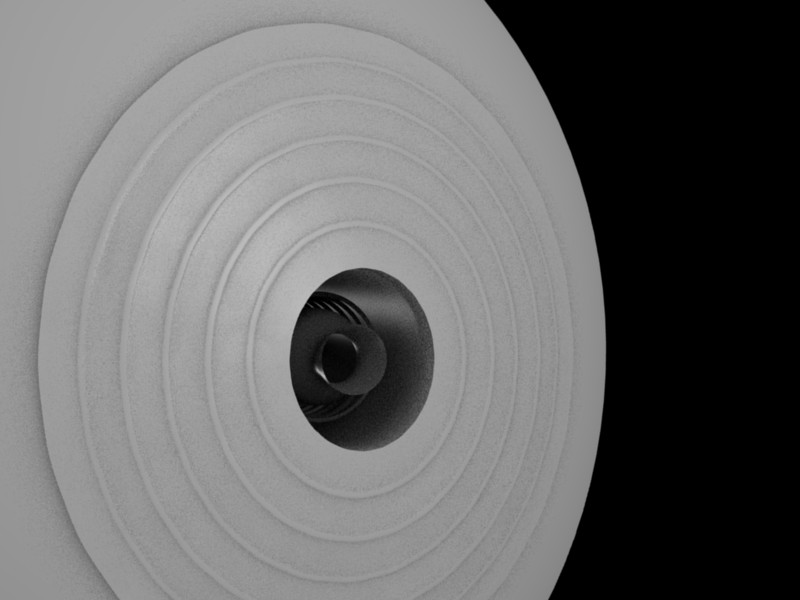 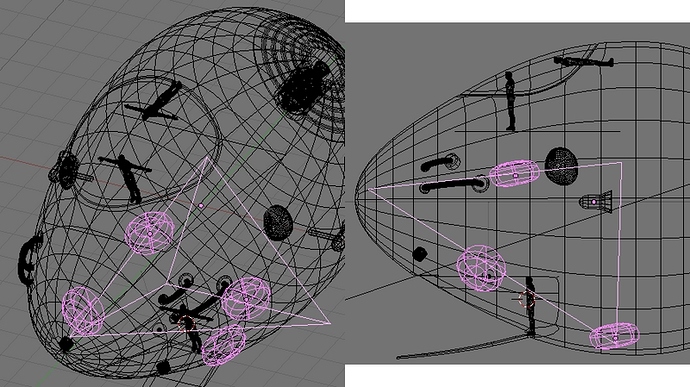 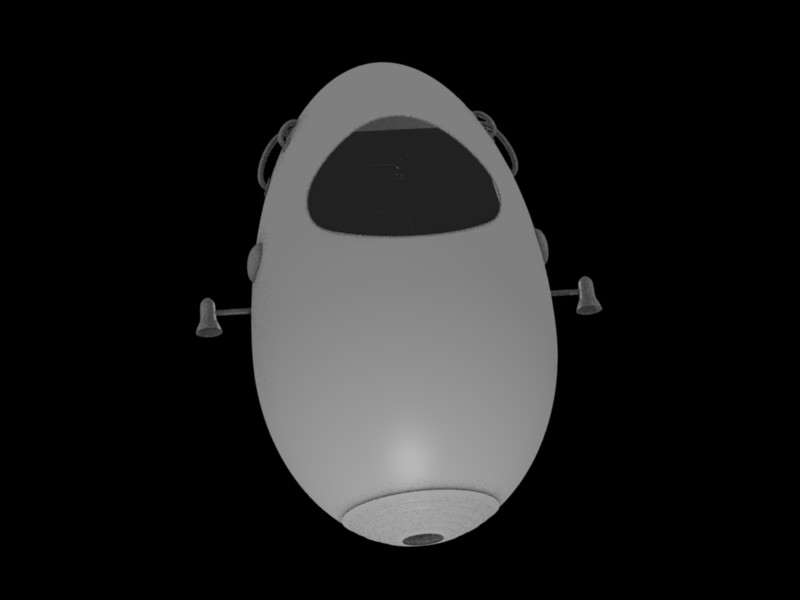 Looking nice! I am a noob when it comes to the details so no crits here! Can’t wait to see this finished!

RE: high tech=simple in nature. Have you ever seen a Phased Array radar?http://en.wikipedia.org/wiki/Phased_array
They do not move. The radar beam is bent electronically. They look like a checkered flat disc or flat polygon. You do need two, one on each side of the ship. Three if you want finer coverage.