The Story:
To the end of 2015 I needed a Sky Environment for some animations. After spending a lot of time on searching Free HDR Images, in January I went to the point that Free HDRs aren’t Animable and they are too Low in Resolution, so I started making something that Blender needed for Years: a Sky Generator full of Clouds that is very quick to render.
After trying a lot with World Node Setups, I realised that the rendering time was too slow because of too many type of Clouds and so too many Nodes.
So since 3 months ago I started this Project and Today I’m proud to present it to all Artists who need Free HDR Images and Animable like a Real Sky :). I really hope Sky Free will help all of you because:
“Blender is Free and Basic things must be Free!” 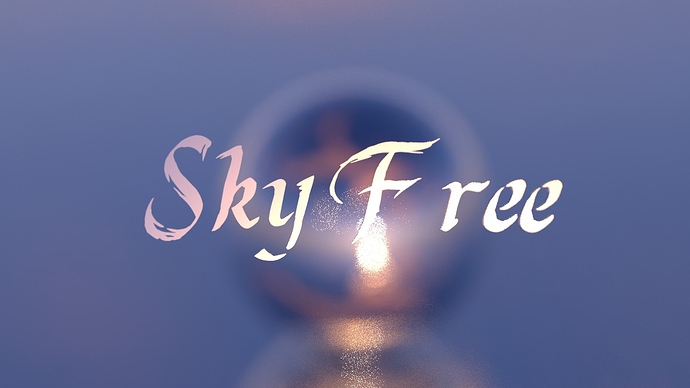 I tested Sky Free, and I really think there’s a lot of potential, but I’d like to see it as a plugin rather than a loaded scene, or at least a way to save the node setup etc to my startup file. Unless I simply don;t know how yet, in which case, please tell me.

I have several material nodes that are part of my startup, and a camera angle etc. that I’d like to preserve.

Hi Roken, sorry for the drawback but now as now it isn’t possible to do it. Thank you for the suggestion, probably in the next release this feature will be added :). Meanwhile, you can try to import Sky Free using “Append From File” and selecting the world node setup contained in the Sky Free.blend file ;). Hope this is helpful for all the aetists.

Nope. Tried, and I can’t get the node setup to append. I just get a regular sun. I’ve tried appending a bunch of stuff.

Really, plugin is the way to go with this. Unfortunately, I have no idea how to build a plugin so I can’t help beyond observation.

Hey Roken, you have done the right thing, Ones you appened the Sky World Node, go to the World section and select Sky

Very, very cool. I will test this over the next week or so and may put up a tutorial on it’s usage. Great work.

Great idea for cycles but I agree with other blenderers are that being an addon not a scene. I wish to see next release as an addon.

I have to append the Scene in order to get drivers working in properties panel (you also need to click Reload trusted and then re-append again the scene and link objects to new scene).

Go to File>User Preferences>File and check Auto Run Python Scripts. After that, click on Save User Settings. All is done. You don’t need to make Reload Trusted anymore

@macio: I haven’t tried it yet, but it looks awesome!

One question: I’ve just read the Sky Free home page and I’m wondering if it will be possible to bake high-resolution HDR images from it using Blender: as you’ve pointed out, free high resolution HDR/EXT images are difficult to find, and they could be used OUTSIDE Blender as well…

Thank you for this wonderful tool!! Thank you!

Thank you son much Macio! Looks great and promising. I’ve downloaded it a few days ago but still with no time to testing. Looking forward to see some results. Nice video!

Thank you very much to all of you :D. ps… Mr. Chuan, delete the version you downloaded a few days ago because this new version is more fast than it ;). People… hold on a little more time

Grass Free will come this summer

Hey Roken, you have done the right thing, Ones you appened the Sky World Node, go to the World section and select Sky

Thank you all. Nailed it and now have it available. Won’ do it now (because work at 6am tomorrow and ill advisedly had beer), but at weekend I’m going to throw it in my default startup)

Excellent work!! Thanks for offering this - if I may, I’d like to suggest the ability to export / save settings for future work.

Ooh, this is pretty good stuff. Thanks for making and releasing this, Macio, it sure helps a lot. Looks good, it’s easy to use, and renders pretty fast. A must-have for a complete Blender toolbox, in my opinion.

Do you plan on adding some extra options for night skies? A bit of a star layer or such.

Hi gungunleon :), yes, in the next Version will be probably added the night with stars

That’s great to hear, thank you! I will keep reloading this thread in sheer anticipation then