Soon, still working on it.

Thank you, can’t wait to start new project with it.

Speedflow is available on Blender 2.8 (use the last version)
Gumroad and Market.

Speedflow and companion are available on Blender 2.8 (alpha stage) !

You can use them if you want, but it will be normal to experience bugs and issues since the add-ons are in alpha stage.

I post the addon only because people are asking, so, n o need to report bugs and issues at this time.

Have you supplied this plugin to Blender?

Hi pitiwazou, thankyou for this.
Is on the road (RMB Pie Menus) for 2.8 version?

Yes, later, I need all my addons, I use them a lot!

Thank you for your update.
I’m looking forward to Asset management, too! My favorite addon.

I just bought SpeedFlow, the text on the top left corner overlaps the “Perspective” text any way to move the speedflow text down abit? 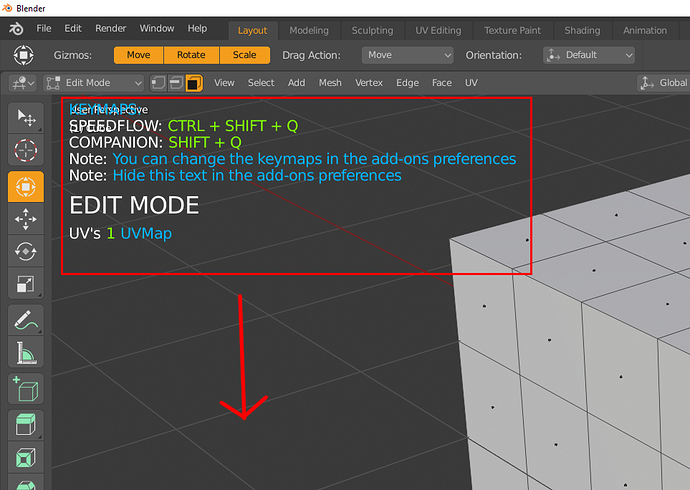 Yes, check the addon preferencesn you can move it and scale it.

I know it’s an alpha, but just to check: you’re planning on making this an actual pie menu again, where you don’t need to hover over the button exactly?

First off, big thanks on updating this. Love all your addons!

I’m aware you said not to report bugs. But on my box I can’t execute any of the SpeedFlow Pie commands.

Also if I try to unload the addon (after I initially load it) I get this. Any subsequent attempt to load it again gets the same error.

Try on a portable version plz.

@Michael_Knubben you can use simple menu or N panel.

Nono, I’m asking for a pie menu. But what’s there right now is just buttons arranged in a circle… If you don’t click exactly on the button, it does nothing! In a radial menu, you’re meant to be able to click anywhere in the ‘slice’, as I show in this example:

I have to say, as someone who is a modeller by trade this is by far one of the best addon ever created. Just curious if you plan on adding more modifier to speedflow in the future?

Also is there a quick way to select a specific bevel(say you have 3 active in a stack) thru speedflow campanion text on the left side? I know you can use < or > keys already.

So yes, I’ll add some others, I would like to make a bend modifier, this one will take more work since on blender it’s really difficult to deal with.

I would like to add the possibility to click on the icon to launch speedflow on the specified modifier yes.
But, there is some issues, If I do that, Autosave will not workwith the current blender code.

Simple Deform is my most-wanted one. I’ve currently got a script that allows me to change my object’s orientation so I can decide which way to bend, but it’s still not as nice as I’d like…

That was a good guess!
On portable it works fine!

Odd, previously I deleted my custom 2.80 folder completely. Rebooted blender - which created a new 2.80 folder. This should be a complete reset of any custom prefs. I have no idea why a portable would work over what I tried before.

After a bit of playing about with this, I find out that on Unloading even on portable I get an error, and can not load it back again.

I can send you a screenshot if you want.

No need I have the error too, the bevel modal needs more work, it’s a big modal O_o !

2.8 isn’t finish yet, so it seems there is an issue with deleting cache.
Like pablo said, to play with 2.8, people should make a reset factory setting each time they update blender.