That feature where you drag a little and instantly rotate the view 90 degrees is something I haven’t heard of before, nice.

Other than that, it looks like the polishing phase is starting to make 2.8 feel more complete. With crashes/showstoppers being resolved and sculpt mode working again, there should be a lot more user testing of 2.8 in the weeks ahead.

The new menu for the visibility and selectability depending on the type of object is really really usefull, and having it in the viewport’s header, love that !

That feature where you drag a little and instantly rotate the view 90 degrees is something I haven’t heard of before, nice.

This feature exist since 2.7, not sure why he showed that

Are you sure about that?

Are you sure about that?

That’s a different feature, that is viewport snapping, not view tweaking to set views

ok so it works, need more work to make it easy to use.
For example, alt + clic to go in front view, alt + double click to back view.

Any news on the Industry keymap?

Certainly some things can be subjectively argued about, but overall it’s massive improvement and no doubt Code Quest was a great success! Very grateful to developers and everyone involved for their hard work! We’re not an easy crowd to please

Yeah, it’s pretty cludgy in its current implementation. For me, spinning it around moves my view across the screen while it’s spinning, and it takes long mouse strokes to get it to switch from a Z to XY perspective. Even weirder, when you’re in Eevee, it doesn’t smoothly rotate to the different ortho view, it just instantly clicks into place.

Though I gotta say that I’m happy with the addition. Once it’s working, I won’t need to use a pie menu to switch perspectives anymore. It’s swanky.

Huh, I hadn’t noticed that view transitions aren’t enabled in eevee right now. Hopefully they get those back in soon! 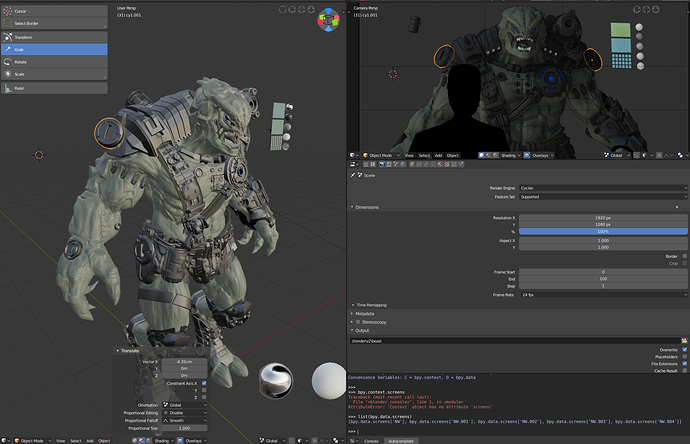 I’m not sure, but quick test shows that it affects both Eevee viewport and Cycles viewport preview. Subjectively think that it would be very comfortable to control HDR EXPOSURE in same place as rotation and bg: 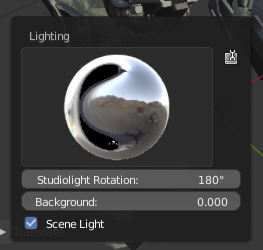 I said many times that having options in 2 different places is bad.

UNDO IS UNUSABLE! Simply moving a object and pressing Ctrl+Z results in 8 second delay! The second time it crashed. It’s very bad in latest versions of 2.79 also (Global undo, serialization of whole scene). What I’m showcasing is a pretty much standard character you’d develop in Zbrush or elsewhere (sculpt few mil tris + some other hard mesh detail). Please throw some heavy scenes in there.

I do agree that Blender needs a redesigned undo system. The new single-stack undo gets rid of a few issues (such as discarding everything done during a sculpt session), but what we really need is a multi-stack system that can crosscheck each other (for the purpose of invalidating items that no longer apply).

In addition, we need a new type of undo step which would essentially be operators, but designed to take the input of operations already done and do them in reverse (making the undoing of things like transforms far faster).

I do respect Campbell as an experienced coder (noting the newest changes is his work), but sometimes I wonder if the devs. don’t test notable changes on anything more than a cube or a suzanne?

I said many times that having options in 2 different places is bad.