Hi, thank’s to everyone who reads this 3 day chaotic journal. I’m a little bit late on the contest but i can’t miss this experience.

For my entry i will turn 2.64’s splash screen featuring a frame from Ian Hubert’s Tears of Steel into an animated scene. I choose this one because i’ve tried to learn blender since but actually took it seriously around 2.75.

But in that time Tears of Steel inspired me so much that i ended up studing filmmaking because i wanted to create my own shortfilms and i knew that with Blender i will be able to create that crazy worlds that budget and crew wont let me back then. As years gone by i ended up making videogames and animations because i feel like i have a little bit more control and that i can actually create projects by my own.

So this piece will be my althar to that plot twist in my creative carreer. i’m very excited of what i have in mind and can’t wait to get it done… but, as i saied, we have just 3 days.

And as an indie game developer i have learned the hard way that scope is crussial when we work in projects, especially the ones we don’t have a lot of time to complete. So in this adventure, scope it’s vital. And the best way to master scope it’s to plan.

Make a Splash in Amsterdam

We ask you to reimagine your favourite splash screen and upload it as a real-time scene to Sketchfab.

The biggest difference between our Splash reference and our entry is the camera.
Our final piece has to be a 3D “Viewable” thridimentional scene that users can walk trough in “Sketchfab’s Realtime Viewer”, in other words there is no camera. User is the camera. Therefore we need to expand what we can see, not just the character and the brain but at least the entier studio of The captain.

But ¿How much could we expand it?

The Solution (?).- Let's set bounderies, shall we?

In order to know exactly what i’m going to make i need to map out the “Set” of Captain’s studio, and for that i downloaded the shortfilm from blender studio and using pureref created an iteration friendly mood board.

After watching a few times the shortfilm i firuged out where every set is in the space and how they connected so i created a Mockup placing the screenshots to have an idea of the actual size and distance between each one of them.

Finally to make it even clear i created a floor plan on Krita that transforms our Mood Board and our Viewport Preview into an actual blueprint of what exactly i’m going to model.

With that done we just’ve set our bounderies.

what’s left it’s to Block the scene with primitives for later polish, but how about we keep this journals short and sweet and talk about it in the next one.

Thank you for your time <3.

Part 2 | Creating the Environment and Atmosphere

Ok, so yesterday i was wasted when i finish my progress and today will be a hard one trying to get done the character so i will try to make this pretty quick, i’ ve prepared a few screenshots though and i hope you enjoy them

One of the things that i think slow me a lot in my personal projects it’s the fact that i don’t like to use assets from the internet, i love to make it all by my own, and even when i know this isn’t the best idea in a 3 day work rush like this i still wan’t to try to make everything my self

So yesterday what i’ve done was Environment and Atmoshpere for the entry, we are going to cover everything from blocking to lighting so yeah i hope yo enjoy this tiny jorunal <3

We know what to do, so let's do it

In our last entry we ended up with this little concept art so it’s time to block it.

With that done we just’ve set our bounderies.

This process it’s more like a lego-ish funny game where we try to calculate the size of everything and get a nice layout out of primitives for later polish.

I went from big to detail, started with rough and big shapes and then went to the specifics such as wood planks, rails, wires.

With the layout stabilshed i went to one of my favorites steps: moving vertex like there were no tomorrow. Here i forgot to do a lot of screenshots so here are some solo viewports of the objects i ended up modeling.

One thing that stills worry me now it’s the fact that this will be shown on Sketchfab’s Real Time viewer so i actually don’t know for shure if the scene will run smoothly once it’s done 'cause i’m on 50k-ish faces and someone in the stream i was working this told me that the Viewer run smooth with 70k tops. It will be really sad if i cannot made it to the viewer, but let’s don’t worry for now, that’s a problem for future me lol.

Also one thing that helped me a lot on this figureing out state was having an object as a reference for my character so i have a visual pivot that helped me to make size wise decitions. 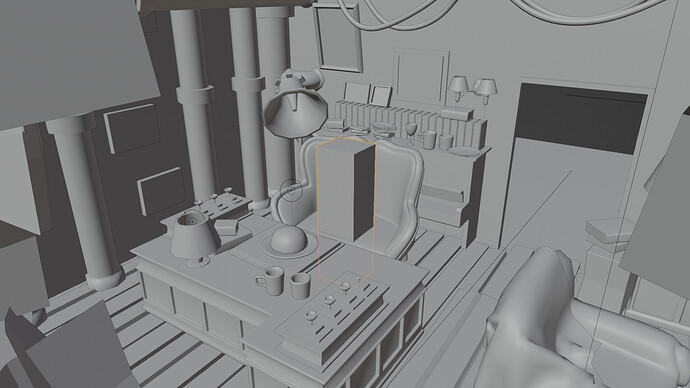 Why so serious?, let's sparkle models up

Ok, in this point i think i have done almost all the models i need so in order to re-use them i want to texture them first and then put them all over the place.

For texturing i used a ton of PBR materials from this beautiful site and change colors, adding color variations, mixing and actually ended up using A LOT of AO nodes to make the objects look a little bit more “used”.

And there was light

Blender lights doesn’t translate into Sketchfab’s Viewport so my plan is to iluminate everything in blender and then bake the lights into the models i know it’s a litle bit riski 'cause all the performance and time this may take but i think it’s worth the shot.

For the lights i used an area light that give us information in almost the whole room but reforce it with 2 or 3 point lights where the lamps should be in the scene. And actually it turned pretty good.

And for the last light i used a cold blue light coming from the brdige to give that pretty good looking stones of the path.

And that’s pretty much it, i’m really enjoying this process and can’t wait to get it done.

Next step will be the Character.

Thank you very much! i actually haven’t sleep yet but i’m finishing the details on sketchfab now

thank you so so mucho for the tips!

Hi, Welcome to the third and last part of this journal, last night i worked all night long creating the character and optimizing my materials to work with sketchfab, so let’s talk a little bit about it.

I had a lot of fun doing the character, once again i based the design on the character from the shortfilm and modeled with the “moving vertex” techinque because i was insecure about how much vertex the scene should have to work propperly insinde the Real Time Viewer of Sketchfab so sculpting doesn’t seem like the way to go.

Everything looks better by hand

Next step was to texture the model and here i had a little problem, at fist i textured using only pbr materials just like i did with the environment, but something feeled off and i didn’t like it at all.
And it buged me that much that even when i was running out of time i decided to texture it all by hand, and actually it turned reaaaaally good.

Last but not list i added the character to the environment and pose it, and it fet so well!! <3, everything was just perfect… 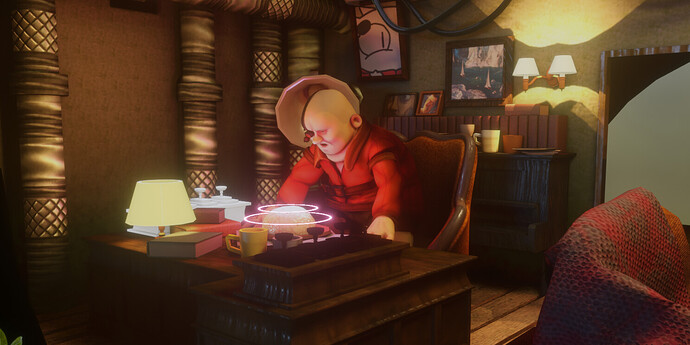 …until… one of the critearia for the judges was:

Make a Splash in Amsterdam

Performance and presentation in the Sketchfab 3D viewer

So that means that all the materials that looked like this: 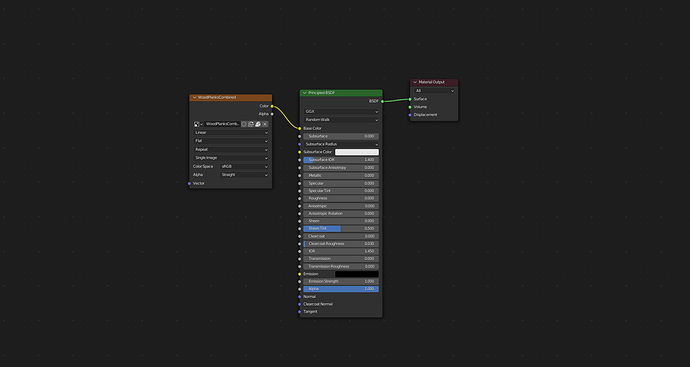 In adition to it i had to bake the lights into every material because i had 10+ lights and in the viewer you can use a 3-4 lights scheme of ilumination.

honestly it was so less paintfull than i thinked, even when i had to re-build the scene 4 times into sketchfab 'till i achieve what i thing was the best version i could have

After i got every material working on the viewer i ended up having fun with the viewer’s postprocessing steps and ended up with this:

Here is a link so you can view it on sketchfab

And that’s pretty much it, this marks the end of this 3 part series journal on this crazy adventure hope you like it and thank you so mucho for taking the time to read.

I Also streamed part of the process on my youtube channel if you want to take a look:

Amazing work, I am in awe! Wish you all the best

Hey! thank you so so much, this means the world to me :')