For concepting the cloth brush/filter is amazing. As a concept artist you don’t need high accurate calculation if its too cumbersome to do it. It’s the same reason why Eevee is a great addition in blender.

I was talking character production, not concepting.

Indeed for concepting, it’s another matter totally different, you could even paint alpha wrinckles with a brush.

ok, there is a lot of ways to do cloth. So what’s your point? Should we all ask Pablo to stop working on the cloth brush and filter?

No, good for Blender to have such brush and improve it.

Using the brush is not magic for character cloth, because it only do physics on the brush zone you sculpt, it does not simulate the whole cloth as you paint.
It will require lot more work and cloth knowledge to fix issues like removing too many wrinckes, adding different shapes with different sizes and angles wrinckles missing,
to make it look good.

I already used 3D Coat brush cloath for many things, it’s great, but for whole automated realistic cloath for characters it’s definitvely not what i use.

I think you have missed the latest developments.

It looks like this is integrating Blender modeling mode physics into the sculpt mode.
(3D coat had this long time ago, but not great implementation and not great results).

If this improves and allow to simulate a full character cloth, fully automated, and looking realistic before tweaking, this could be awesome indeed.

They are actually different settings. It’s simply bad UI design and the placement of those operators has not had a lot of thought put into it when they were added. The ones you see in the Advanced tab are options for the specific brush you happen to use. The Options tab are global settings of those same settings, so you can still have those active across all brushes without having to activate them again when you switch to another brush.

I do hope with these cloth making improvements that we will at some point get the ability to stitch clothes together like Marvelous Designer or like some cloth add-ons do in Blender. Would make for a pretty solid workflow for cloth creation.

@MichaelBenDavid: There’s more on the way… For those of you who are interested in future updates:
https://blenderartists.org/t/egg-object-for-blender

Is there a more recent build that has the vertex painting/sculpting in it? I’ve been dying to use this for a project but I can’t find anything from the last year.

There was a long discussion about the future of Dyntopo. We touched the use cases for dyntopo and
what the industry most uses. One issue is that Dyntopo performance isn’t what is expected but the
option to do dyntopo is visible. Some ideas have been discussed including hiding dyntopo in an
experimental menu or add a text when enabling Dyntopo.

Switching between Dyntopo and Voxel Remesh workflow currently uses a lot of memory. Blender can
crash due to this.

It warms my heart to read that Dyntopo is not abandoned, but will get some necessary new

That looks a little bit shifted compared to what is expected for a solid 2.90.
There is no mention of shapekeys or sculpt layers.
So, I suppose that will not be correctly supported for 2.90 and be a bigger long-term todo.
Without that support, I don’t know if new multires will be welcomed or hated when 2.90 will be released.

Because of that issue, that is weird to see that they discussed VR sculpting.
But if you put that in perspective of 2.83 release (which is release allowing VR inspection of scene), that is less weird.
In 2.83, you can look at your scene. -> next step is to interact. But probably, VR layout, VR animation and VR Grease Pencil could maintain the “whoa” effect during wait for VR painting and VR sculpting.

That is a great announcement to see that they will look at Dyntopo issues. I just hope that they will not hide it to eventually bury it.
I don’t understand that logic to hide things they are not proud of. Users are not blind.
They know that things are not perfect.

Hiding Dyntopo would just conduct to make the feature less known by new users, who would spend their time, asking for a Sculptris mode in Sculpt mode.
There is already a warning pop-up when it is enabled.
I am not against a longer text and a reminder that user is in dyntopo mode in Viewport.
But although feature is not at level of expectation of hardcore sculptors ; there is no reason to hide it, now. When that is available to users of ZbrushCoreMini.
Although that seems outdated ; there is no shame to have been visionary and one of the first 3D app after Sculptris to try this new concept.

About Sculpt Vertex Colors, report is not really re-assuring. They are talking about a patch with minor changes for 2.90. Confusion should be avoided but things should look like current vertex paint mode.
That means that part will not looks the same in 2.91 and will probably change again in 2.92.
I don’t think that helps users to get used to Blender.
They did a great job with grease pencil in 2.83.
I think they should take their time to do the same for Sculpt Vertex Colors.
Having a bunch of artists testing it in a branch, and then, only merging it when it is a minimum solid.
That gives the impression they will rush it and commit an half-completed temporary workflow to have something in 2.90. We don’t care if it happens in 2.91 or 2.92. Anyways, next LTS is 2.93.
So, what will be the point to have to relearn basics and rebuild a workflow, at each release ?

Alas, bmesh is single threaded. That explains many, many things…

Indeed. Nobody wants to go over it again and again. No production level-job can be started with such shifting features. Can’t risk dropping everything in a trash can.
At this pace, I’ll expect no usable, stable features before 2.93…
Yes, we can play with it, but no serious job… 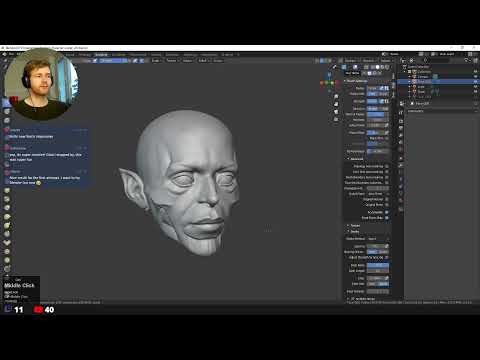 Got any timestamps to highlight or more to say about it? It’s a three hour video.

LOL. I’ve just realised I’ve been watching it for 2 hours and 45 minutes. The whole video is pretty interesting as it’s obviously someone fairly experienced with sculpting in Zbrush and it’s cool seeing him discover the similarities and differences in Blender. He seems very open minded and positive about the Blender sculpting experience.

What can be worrying is some basic brushes are really not good in Blender ( better fix and improve the basic brushes instead of quickly adding more and more average quality features ).

I find the scrape brush works better than the flatten brush for this type of scenario.