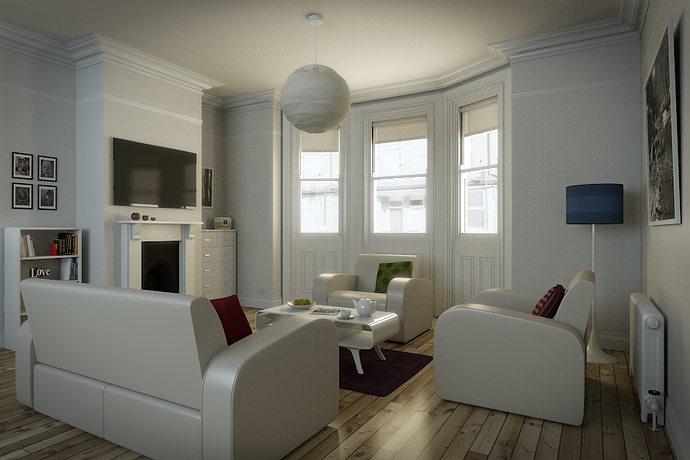 It’s a test of Cycles Blender 2.62 Path Tracing of an interior Archviz scene, if the settings or anything that you are interested in, please feel free to check it out. There is a lengthy PDF included which explains most of the things in the blend.

For those that can’t wait to read the lovely prepared PDF, here’s a brief summary of the set up:

Lighting in the scene we have:
1 x Sun lamp
Internal Sky Background Texture
3 x Mesh Emitters for the visible windows (Camera Ray Visibility off)
1 x Mesh Emitter for the simple window behind the camera to add a bit of extra bounced light(Shadows off)
1 x Background Street Image set as an Emitter/Shadeless node material (lightened to appear over exposed as it would be if the shot was taken indoors with a camera).

Renders in around 20 minutes on GPU, not tested on CPU.

I’m testing your scene with Yafaray to see if i can get anything like your render.
Thanks a lot for sharing such a great scene!

Thats a shame Jakerlund, I know it’s a pain when you don’t have the kit to use GPU and Cycles together, my base machine is a Core i3 which compared to some guys specs here isn’t that great at all. I bought my GeForce GTX 450 Ti card to invest in Cycles as soon as it became available, I don’t think it was that bad, only around £150 (UK Sterling) - Most gamers would consider this card at the very bottom, but for Blender it does pack a little punch to things.

I still think though using the CPU, this scene is comparable to Luxrender, Lux might have more of an ambient realistic look, but I’d be rendering over night, if not beyond - I didn’t test, but I’d imagine it’d be around 4 hours for CPU, maybe quicker (I must test it sometime) - that aint that bad. I’m terrible with Yafaray, but if you know what you’re doing then I’m sure it will look cool.

Very nice, I hope to get some time to check it out

A stupid question, but I need to now.
What is a “Mesh Emitter” ,how I can activate it , tell my all about it

a link is OK.
Thanks

Hi Chris, no problem, a “Mesh Emitter” is a term to describe an object (Mesh) set with the material/shader to Emitter, Emitter being a light source. You can have anything set to Emit, it doesn’t have to be a flat plane. Mesh Emitters in Cycles produce less noise and Fireflies (the anoying white dots that never seem to go away no matter how long you render) than “Area Lights” which would normaly be used for say windows etc.

Great work, Jay, and thank you very much for the explanations.
I have to give a try to your integrator settings: I usally leave much more bounces (like 64 or 128) but your render proves that setting could be an overkill.

Well done, sir. I appreciate the amount of work you put into it. I’m especially pleased with how well organized the file was… the objects were all named appropriately and your layers made sense. Great modeling as well!

Glad you guys like it, as I said I really hope to see more interior renders now from the community, hopefully some that are better than mine - It’s not as realistic as say Luxrender, but then you won’t need to wait over night, or longer to find out. Can’t wait till we get propper Photon Mapping in Cycles or similar though, drool!

@Jay-artist - i finally got around testing your scene in Yafaray.
In DL - Direct Light and full 1920x1280 on my old Mac Pro from 2006 the scene was rendered quite fast like 12 min which looked very good.
But for a slightly better result using PM - Photon mapping and higher settings it was 4 hours.
But for someone not having a cuda enabled graphic card being stuck to CPU Yafaray is very nice renderer, ok it takes lots of testing getting each material behaving right but once you got them right Yafaray really deliver in quality.
Btw… i added a little bump material to the couch so they wasn’t so clean.

Btw… what happened to the fireplace in your render? it’s just a black area.

Thanks for a great model :eyebrowlift: 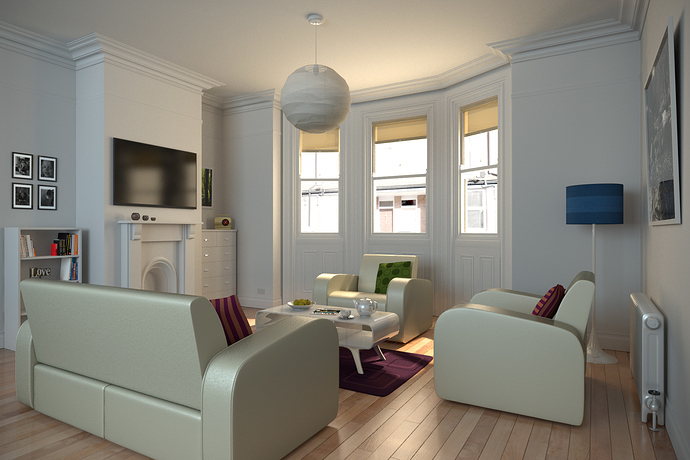 - I was tempted to try myself, but as you probably found out yourself it took a while to sort. That’s the thing about Cycles vs Yafaray I think, with Cycles you get instant feedback, with Yafaray you have to sit back and wait and mess with settings a lot and unless you’re really familiar with those settings, getting a noise free render takes a while. I do like the ambiance though that Yafaray produces.

Even though you added some bump to the seating, it’s not really that visible, at least not in this pic here - it looks a bit more like noise in the highlighted areas.

With regards to the materials, some of the white shinny areas look too shinny to my taste, especially the teapot, cup and saucer, which are almost like some kind of white chrome - The radiator shine is a little too much too - should be slightly more matte. and the LCD TVs diffused reflection looks a little too noisy.

The overall look isn’t bad though, I would say it appears to have a lot more contrast on the edges, but then that could be the pic itself on the forum especially if it’s compressed.