Hi,
I’ve made a small script to move, rotate,scale a strip, directly in the preview area.
The common shortcut are used, G,R,S.
for Each strip you want to modify you need to add a transform effect, select it/them and do what you want. 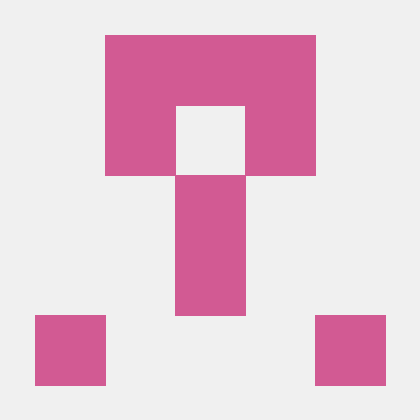 VSE_Transform_Tools - Addon to manipulate the strip in the Blender VSE

Edit:
How to use:
T add a tranform effect to the strip(s)
A select and deselect all strip
Q for the strip opacity (alpha), work with ctrl and value too.
ALT + Q Reinit Alpha.
C : show the crop funtionnalitie, C again close it
grab the corner or the cross to setup the crop.
FOR MOVIE FILE
At the moment, you need to see panel texture and in world texture, you know the small earth.
(A patch come… I hope)
ALT + C: Reinit Crop.

I would like to thanks DoubleZ for his help and his great work.
We will update the video soon…

Hi kgeogeo
This will speed up basic operations a lot. I need it and I like it.
Congrats

a huge step for mankind. I mean, at least in blender!

thanks.
There’s still a few bug, I’will solve that in the next few days.

I’ve an idea.
Select the strip(s) , press T and that add directly a transform effect to each strip.
With exactly the same setting(blend type, alpha, …)
Good idea?

I’ve fix some bug.
For translate you can constrain with X or Y.
Shift also work to slow down the movement.http://www.pasteall.org/39455/python

Yes i’ve already seen this patch, but It work on the offset of the strip and there some limitation.
For eg you can’t rotate or scale.
If the strip is with a lower resolution than the render, it’s not strech anymore, it’s small and I think there’s nothing to do for that.
That why I’ve made this addon and only work with tranform effect.

Keyframe, you mean, press I on the preview area and it key frame the location, rotation, scale.

Wow that’s awesome thankyou so much. How can this get to trunk addon??

Now, you select the stripe that you want to transform, press T, this add automaticly the transform effect.http://www.pasteall.org/39494/python
I will try to do the key framing tools.

I don’t know how to add this into trunck, when it done I’ll ask to meta-androcto.

I will have to have a play with it, I will get back to you with suggestions if that is ok. Looks great so far, thank you again.

Well that is spectacularly good! And lots of fun too. I like that adding transform (t-key) automatically adds the transform and hides the original asset.

I have found that you can easily duplicate a transform and offset it below original, with over drop/curves modifier (set to black) and move both for a quick drop shadow. The additional strip could easily be a color effect strip I guess. Perhaps this could be a menu selection when you press the t key? Or a modifier of the t key, like alt-t? 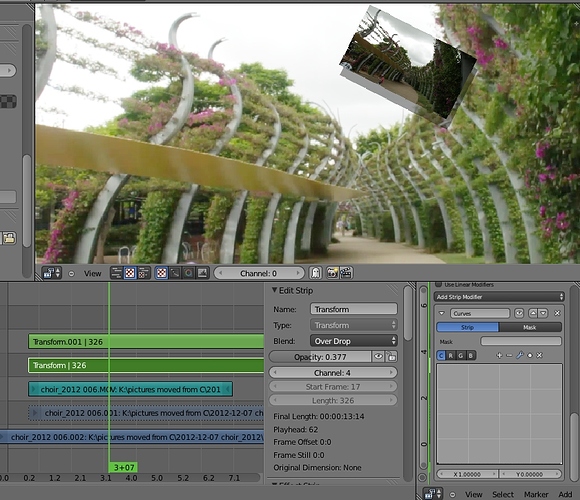 drop shadow.jpg840×724 315 KB
Of course both strips would need to be active so that they stay in sync with movement commands. The user would be able to alter the offset from say lower right and some percentage of Render Settings width/height (they should do that before first keyframe).

P.S.
It’s a shame that we cannot distort the image further, for corner pinning. I have used the UV unwrap to transform an image via nodes but not in VSE. Can’t have everything I suppose.

Ok I like the concept of this script but I am having real problems getting it. SOME sites where code is posted, if you do a copy and paste in I.E. You do not get carriage returns so the code comes out as on long line. Pasteall.org is one of these sites.

Edit: I got it now. I names it VSE_transforms.py becasue I did not know what else to call the .py file

I used the copy to clip board function up to the right of the View As menu. Then pasted that to notepad (windows) and saved as .py.

Hi, @kgeogeo! Thanks for the good script! Can you share your code over git (may be github.com). That help me orady have last version of your script.
Thank you agane!

Sadly I cannot see a way to create a soft drop shadow, that is a blurry edged alpha on the shadow layer.

EDIT:
I just thought of a way.
The shadow layer could have a multiply type layer mix with glow and invert. Hmmm. test test test.

EDIT:
Oh well, the alpha of a strips layer acts strangely so it doesnt work.

drop shadow.blend (421 KB)
Happily I figured out the soft drop shadow, but it is fidly as Blender seems to keep alpha tracked through layers. You have to collapse the alpha before using a multiply effect. Any way heres what I got if it’s any use, unfortunately there are many strips to make a simple black and white shape to blur 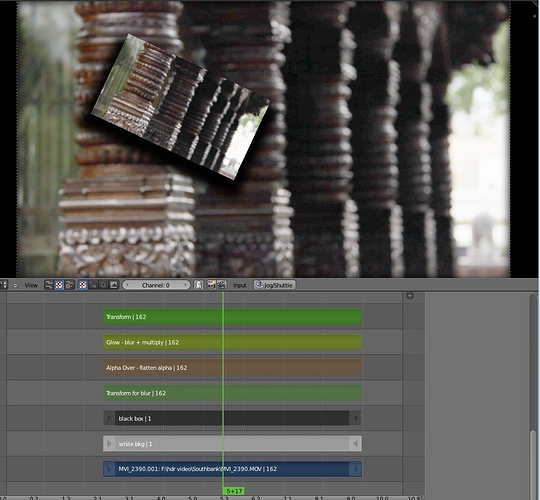 Sorry I write to quickly and not clearly.
Suggestion :

these would add a color effect strip and additional transform effects as required. Making both the resulting transform strips active with default offset at the end.

Not sure that it’s really needed in this addon.
I think it’s more like a new effect.
It would be better to make another addon for that.
If you want I can take a look to that.

I understand. I get carried away sometimes :spin:

The 2 concepts are certainly tied together. I guess it makes sense to generate the Transform first then apply a drop shadow effect to it?