Why don't my lights glow?

I can’t get a glow effect for any of my light sources, they usually just remain lit up. This is especially hard when I am trying to make a glass lamp, as there is then an awkward lit up ball in the center.

Here’s what I mean:

If you are using eevee just enable bloom option.

Cycles is as realistic as it tries to be and there is no easy glow option. Usually glow is achived in cycles in compositing or for more realistic result with volumetrics which looks something like this 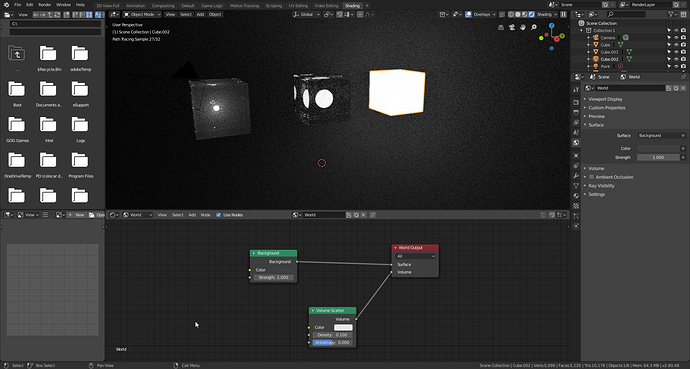 Four methods in Cycles I can think of:

I still very unexperienced, do you know any tutorials for this?

Hmm, okay. I’m also not using eevee. I’m not very experienced with the compositor either…

Volumetrics only on camera rays can be ok performance-wise.

How to make a glow in Cycles without Compositor? Materials and Textures

Hey guys, I was wondering how to use the nodes or something to make an object with the emitter shader to glow all around rather than just on a surface, for instance, being in a dark room then seeing a glowing orb with the blurred light around it. I tried looking for something but can’t find anything that doesn’t involved the compositor, I’m trying to make it as a material, not for “Photography”.

A few days ago I got this idea of using Blender Volumetrics to create a glow effect around an emission object. It took me a bit of time to get it like I wanted it, but I think it turned out pretty well. So I thought some of you might find this interesting. First of all I created 2 materials, one with a texture to make the glow seem less smooth, and one without. Here’s a comparison: [image] Here are the node setups. Without texture: [image] And With texture: [image] I know this is fair…

I’m not very experienced with the compositor either…

Probably any compositor tutorial/movie on youtube should get you on the right track. Glare node in fog glow mode will make everything bright glow, which, unless you know you’re going for something specific, is probably what you want.

Unlike reality, a CG “lamp” does not emit light – in fact, it can be right there on the screen and you don’t see it. “Volumetrics” is, if you will, a simulation of the effect that you see when the beams from a physical light source bounce off the dust in the air. But there are actually lots of ways to do it. For instance, a cone, with a low “alpha” setting and a material that “emits light on its own” (whether or not a lamp is directed at it) will achieve this effect.

way that you can dream up.

Sounds great! And that’s actually what I’m trying to go for, it is a bit tricky to hit the mark between realism and something boring like a bunch of diffuse textures.

One of the great lines in the [movie …] musical, A Chorus Line. is when the director tells a dancer: “Don’t draw my eye!” (This is “a chorus line,” after all …) The same principle applies here: if it’s cheap and it “doesn’t draw my eye,” do it.

If the user’s eye accepts what you have done – if you don’t “draw my eye” – then it is “realism.” You’re done. Put shrink-wrap on the sucker and move on.