With so much detail spent on parts that won’t be seen, which is super cool by the way, it’d be awesome to see an animated removal of the body and wheels, once you complete this.

I’m planning an animation but there still a lot to do : modeling, shading… Stay tuned! 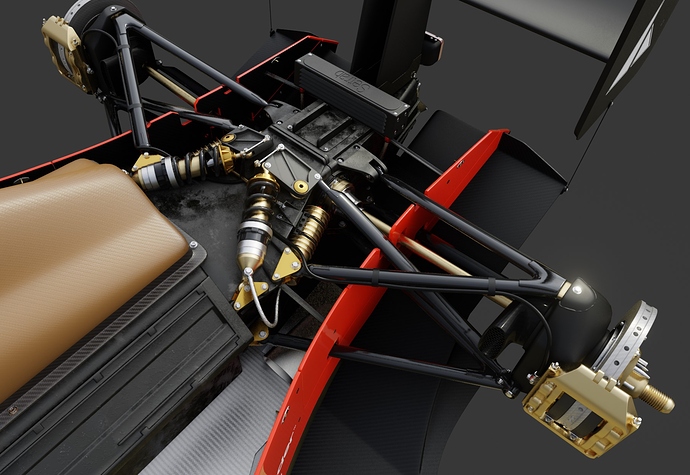 For more pictures, have you tried looking on Flickr?

thanks for appreciating @SonicBlue
speaking of the pictures, i’ve found some good pictures for the “exterior”, the problem is the “interior” (mechanical parts) because i’ve found few pictures with differences from each other (maybe different development steps of the car?) so that what i created is an… average of what i’ve found so far.
anyway i’ll take a look there, thanks for the tip

It’s difficult to find pictures of the mechanical parts, there’s also a chance that what you are looking at is not the 641/2, but the very similar 640 or worst the 642.

The 641 has different chassis, so it is possible that they have changed something during the races, or that the pictures came from a restored version.

This website has some informations (like where the car appeared, so searching the event may provide some more “hidden” pictures)

Have you seen the Tamiya 1:12 scale model? While it’s a toy, it can show roughly where the components are, especially the one that are usually covered.

It seems that we have a decent engine for my car model, now. Thanks to @SonicBlue for finding some really good reference images 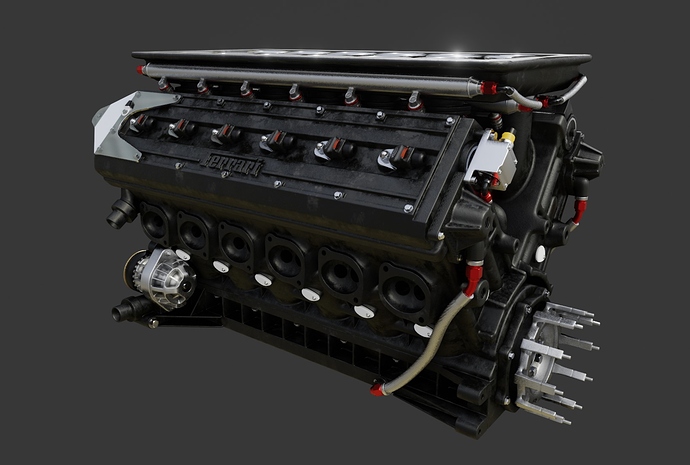 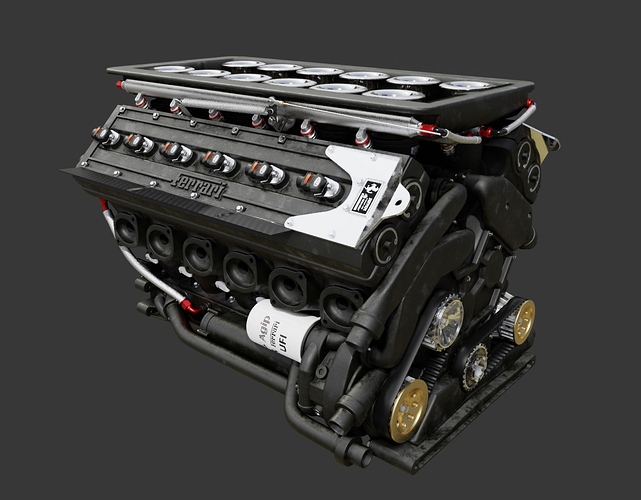 The engine is practically identical to the real deal, there are so many variants of this engine that even the mechanics will have problems identifying form which era of the car it’s from, very masterful done.

How was the viewport reacting with such a complex object?

some lags on modifying the main part (because of subsurf and a lot of shinkwrapped elements on it); no particular problems with lookdev or render mode, even if I activate all the stuff ready so far

Man this is sick! You are the master.

Ahahah! Thanks and stay tuned, other updates coming soon

radiators, airbox and exhaust ready for my brand new engine 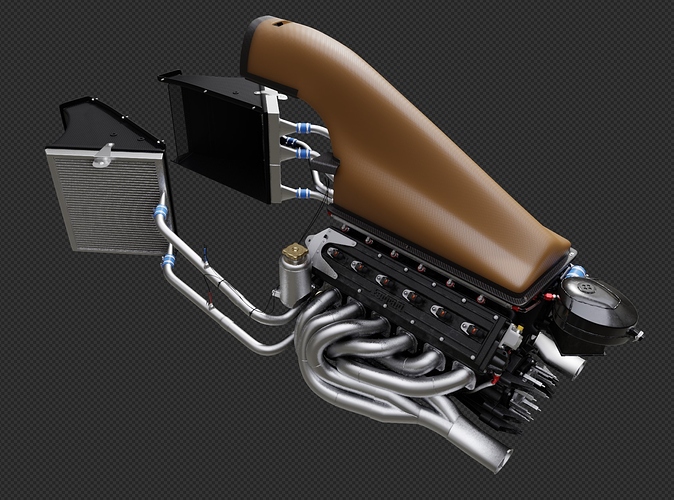 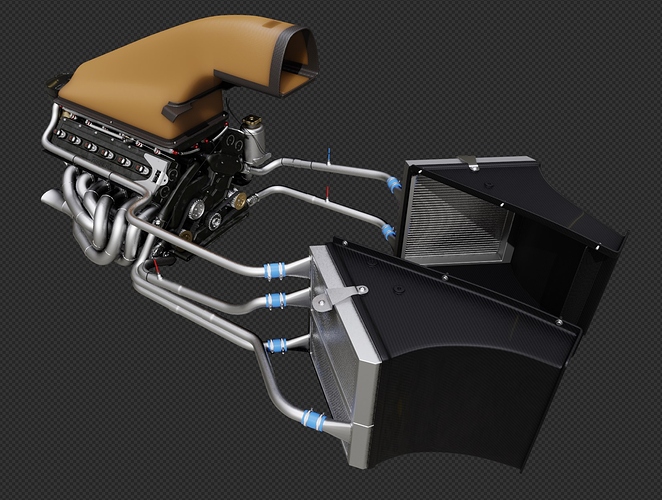 electronics and wiring ready.
the model is done, now I can focus on final materials 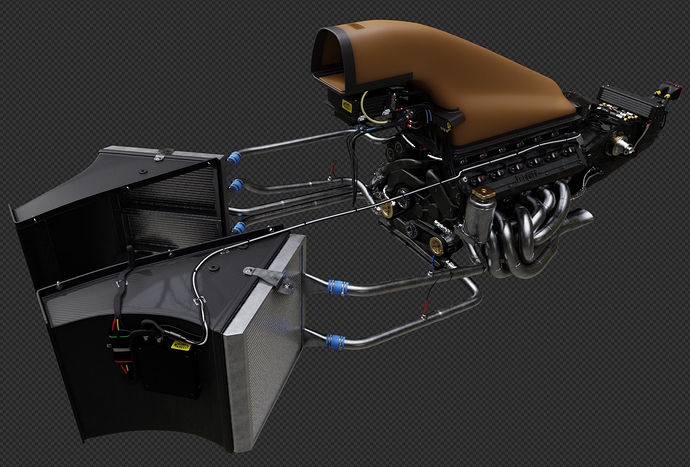 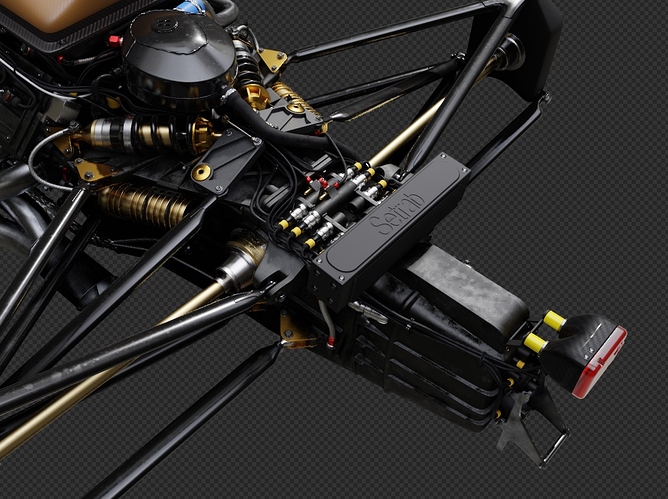 after a busy period, some tests on materials 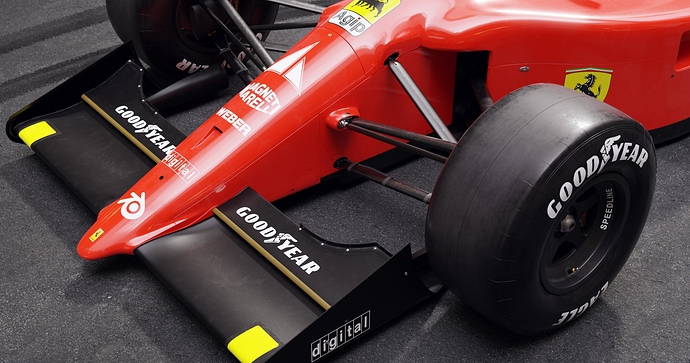 This is absolutely mind boggling! I am currently building the Tamiya 1/12 scale model of this car and was wondering, would you be willing to upload the files to Shapeways (or some other 3D printing site) so that individual pieces could be purchased (and you could make money as well!) My request is particularly for the tires. You see, the kit is almost 30 years old now and unfortunately, the “rubber” tires have basically disintegrated. One of the four in the kit was still soft and flexible, the other three are useless. One actually broke into several pieces just by squeezing it! I have searched for replacements but the only ones I could find are ridiculous expensive (almost 3/4 the price of what I paid for the entire kit!). I have thought about 3D printed versions but I don’t have the ability to design or print them. Yours look absolutely stunning, along with the rest of the car, so they would probably make perfect replicas that don’t fall apart! Food for thought, no?

I think I know that model, I have some images of it in my reference library
speaking of your idea, i don’t think it’s worth it: I mean it’s not only a matter of exporting the meshes, but they should also be prepared for 3d printing and, believe me, the complexity of this model has gone further away from what I imagined when I started it

anyway I’ll contact you in private message to speak about your problem.

Excellent modeling and amount of details in this!

While these days #IStayAtHome, I had some free time to work again on this project and get closer to the end of it.
I worked on the illumination of the scene, creating some “gradient area lamps”; I had this idea after seeing this presentation at BCon 2019:

This event brings together technical and creative people from the industry, contributors to Blender, and everyone interested in using Blender.

Here you can see on the right an area lamp and, on the left, the same lamp modified by me (the gradient on the border is the main difference, as you can see):

Here you can see the scene with “traditional” area lamps (notice the harsh reflections): Here, instead, you can see the same scene with “gradient area lamps” (notice smoother reflections): Stay tuned for next updates, we are getting closer to the end!