‘May the ghosts of Mech Warrior guide thy mind and hand too victory, young padawan!’

(forgive the juxtaposed hyperbole but you get the gist)

When Tears of Steel was made, the Blender Institute had five of these robots. To handle them they used a very obtuse and unintuitive workflow that involved linking them from 5 .blend files (because Blender still did not have some basic 1990’s era animation technology like overrides).

Now, you can create a whole crowd of them in different poses as collection instances (in less time than it took a team of artists to make one scene).

current thoughts on remixing it are mostly to recontextualise the pose. because to my eye, it looks very intimidating and like a prowling animal ready to attack. I haven’t seen the source material so i don’t know whether or not that’s the case. I will probably avoid watching the source until i finish so that i don’t tamper my ideas by seeing theirs.

but the idea is to make it look like a cornered, more timid animal while using the same pose. mostly by building out a scene around it where Post-apocalyptic cavemen looking humans are huddling it with primitive torches and spears in a dilapidated warehouse.

I am working on a concept based on Tears of Steel as well! Can’t wait to see your upcoming WIP’s!

Currently don’t really have an active account but will be posting some stuff coming up.

a lot of my stuff has to been changed a little bit as it doesn’t carry over well, as im seeing now (materials, certain constraints, etc) 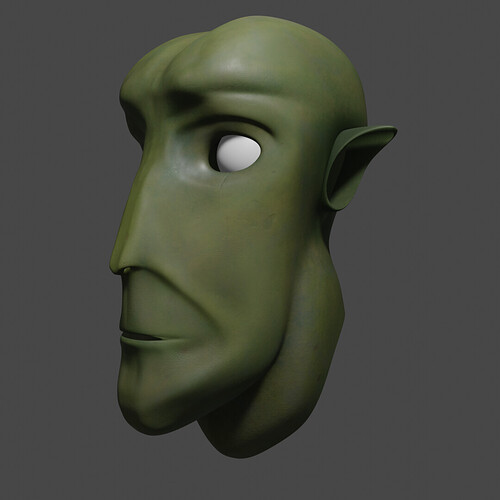 View the profile and 3D models by SeanScottKino

That’s awesome, I’ll be sure to look at yours as well. probably only when I’m deep into mine lol. 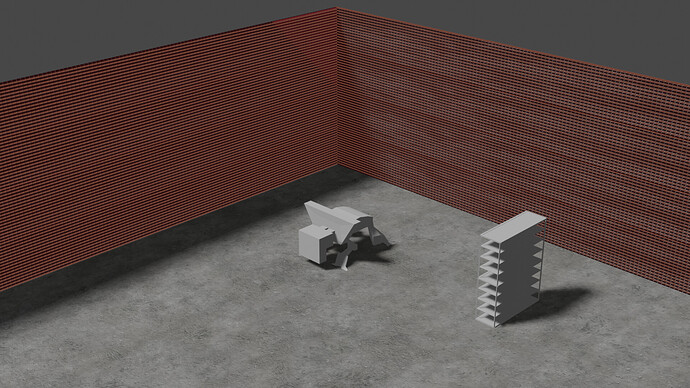 I don’t know if the etiquette with posting WIP’s is to post every addition or to post in waves of changes. because currently i feel like this is a bit of a minor update. I made a the floor and a wall. both textured in substance which might be a cardinal sin here lol.

the wall is just a double array with a plane to make the mortal between bricks. probably will add a plane with a musgrave/noise paint texture to break up the symmetry on the walls.

walls look very uniform but will be bool-ed after i put warehouse style windows in (which will use bools to make their own holes in the wall). then everything will be booled to look damaged (can you tell i like bools?)

other than that, little warehouse shelf made using Beam factory (using the L preset). want to run a physics test to see if i can make it look organically broken by letting gravity pull the pieces apart, otherwise will hand place all the other shelves. 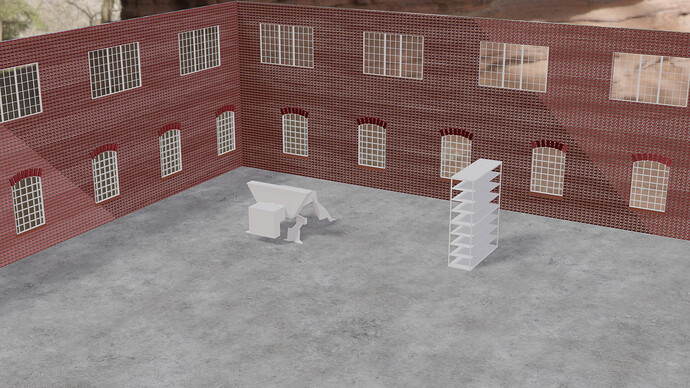 minor update as im side tracked with other projects and work. did the windows for both floors.

the final render will be in eevee so the glass is just principaled bdsf mixed with a transparency node.

next steps are: texturing the windows, then starting to make the robot. and designing the people. have some ideas for them but i want to tinker in my head with it before making them. plus knowing how the robot will look textured by me, in this scene will help me make decisions on how i want the people to look to blend into the scene. 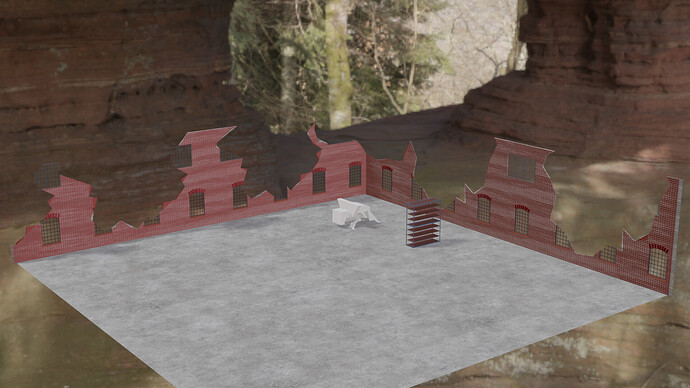 next up is cleaning up the mest of the wall a touch, poking the glass so it looks more organically shattered and then adding more floor details like shelves, debris and bits of fallen roof.

then on to blocking out the other characters and the robot

this is going worse than I hoped both in terms of execution and time frame. side tracked with other projects.

but i have the environment pretty much finalized 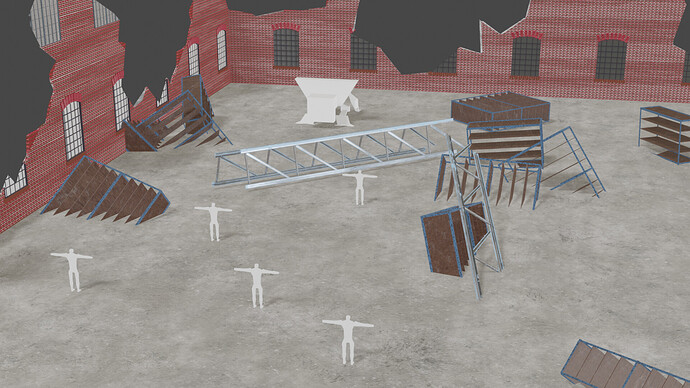 used a particle system to displace the shelves and used re-textured them to give the a more cohesive wood texture to match the set.

placeholder people blocked out using a base human mesh i have from another project, its very much imperfect but will be the basis of the characters. tomorrow, I hope to make the placeholders into distinct characters and pose them with weapons. seeing how they look, I will model/texture the robot to make - keeping the pose, silhouette and enough that it should still read as being based off that robot 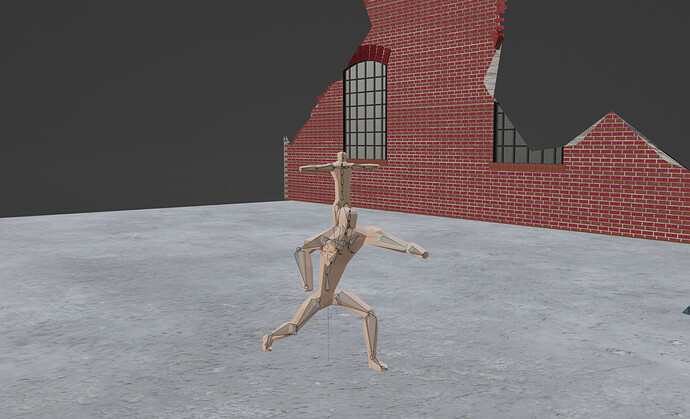 since time is a bit tight, its rigging with automatic weights. no IK, no FK, no controllers. just hand posing which will be slow still. once posed, i will dress them up, add weapons, hair, clothes. then move onto the the robot 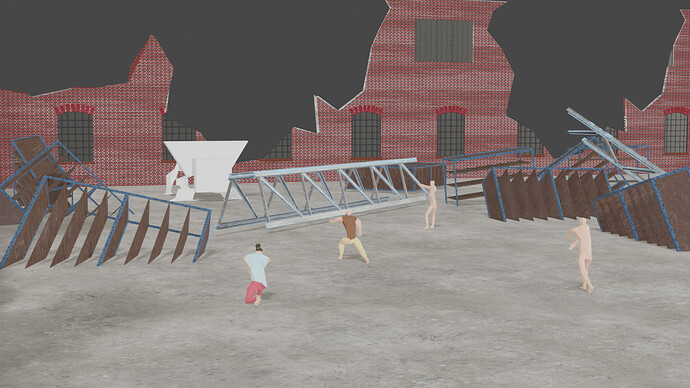 I love the windows and rubble, and I hope you use them to get some raking light shadows like in the original. Make sure to get it on Sketchfab by Thursday, September 15, and tag it #bcon22challenge 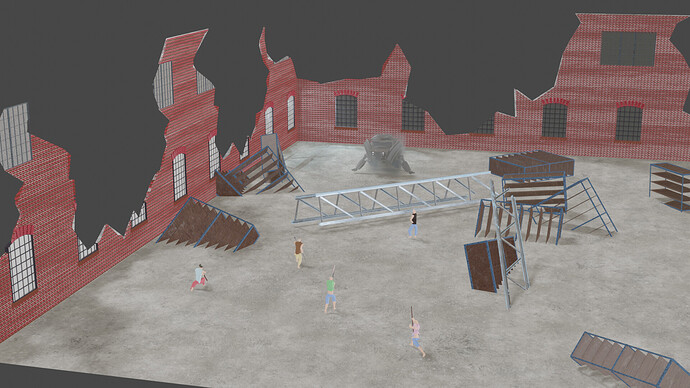 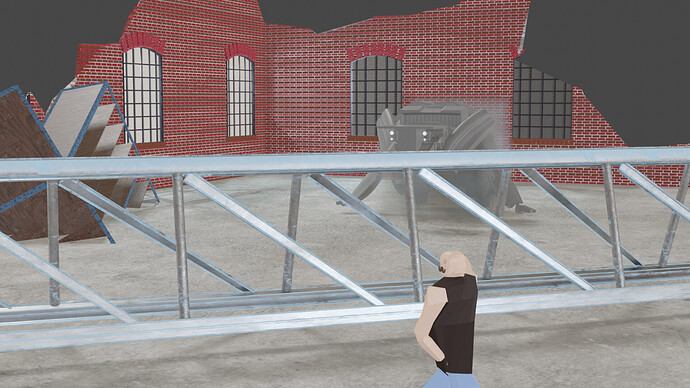 final images- pretty happy overall, yet to upload as the substance textures don’t come over natively.

tomorrow morning last steps are to make a .zip file thats small enough that sketchfab accepts and have everything inside it. potentially will have to remove the basic volumetrics i’ve done and incapable of doing the god rays of the original image as they a bit outside my current understanding of blender.

its been a great challenge and a great learning experience

I struggled with the godrays as well, but i leant how to make them(opacity maps) using a painting software. I used them for my scene as well. Here let me give you the godray texture that I made. 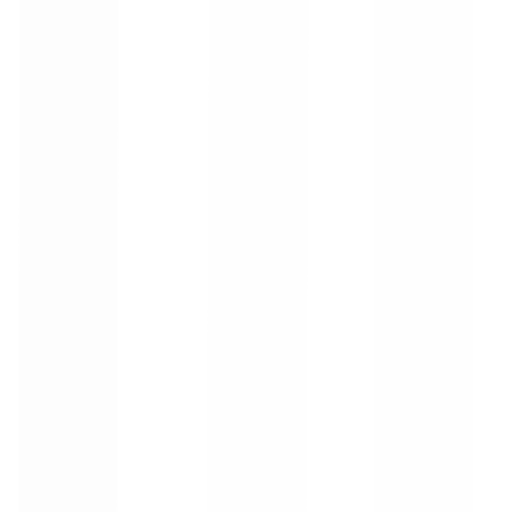 Simply import them as planes and connect this image texture to the alpha and set blend mode and shadow mode to Alpha clip or Alpha hashed.

Here’s my simple node setup for it. Good luck! thanks this is so kind and very helpful. now i get why my way wasn’t working lol.this is much more intuitive.

they will get implemented, currently trying to figure out why my scene still has no materials.