Yet Another Thread about Cycles Materials

Haven’t posted in this thread for a long time. Tiles are always fun, and here is a way to randomize tiles using texture lookup where the texture is randomly positioned, scaled, rotated, and mirrored for each tile. To generate the texture coordinate, you need a tile generator that outputs per tile texture space (bricks’n’tricks and synaglow’s tiles does this) or use builtin bricks texture where you feed random black&white output into a noise generator which is then added to texture coords. In this example I’m using my own which has some other tricks, but irrelevant - I’m only showing the randomizing node group and what you can achieve when using it on one or more big textures (I used some free ones I found on poligon). Textures need to be seamless, and they can be mixed and mangled any way you see fit. The idea is to use a big texture as a lookup and basically have no tile look the same - at least at first glance. If you have to look hard to find repeats, then mission accomplished as far as I’m concerned

So here is the node group that mangles the coordinates: 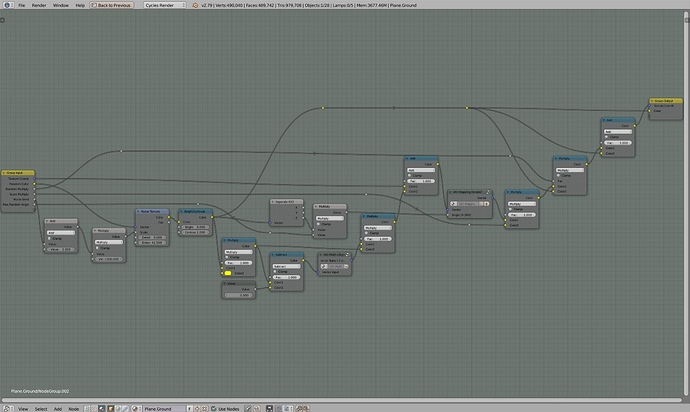 The Util.Math.vSign is just a math greater than, multiplied with 2, minus 1, operating on all three channels resulting in either -1 or +1 (used to mirror the scaling operation).

And here are two huge tests that shows how well it holds together when used: 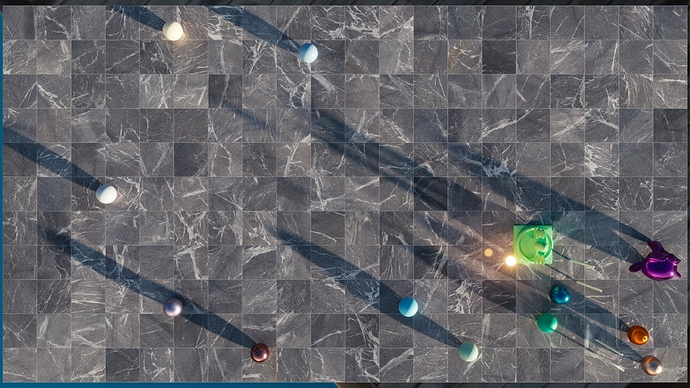 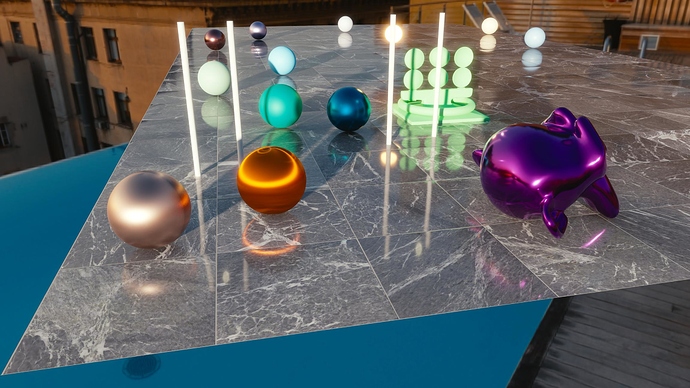 The textures I’m using are very big and seamless (required). If I had a memory budget I’d probably use simplify texture size to see how much I could scale down the texture(s).

1 Like
Procedural Old Stone Material
Anybody has a tip where to find those limestone tiles like textures?
Make materials look less tiled
Make floor look like tiles (actual tiles, not tiling textures)
videffectshd (videffectshd) May 2, 2018, 12:32am #673

How do I make a realistic Coffee Bean material in cycles? (without an image texture)

I’d like to contribute a texture to this thread. I liked the cloth texture materials, but I don’t think I saw anything about knit textures. I’d like to provide this seamless knit texture I put together in Illustrator! I hope it is of use to @ least one person on here! Kind wishes, I hope you all are doing well! 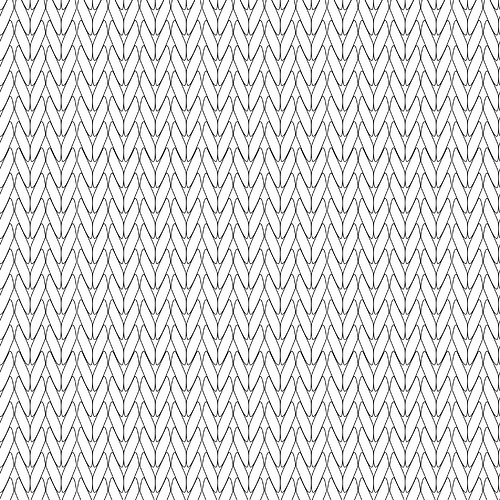 can you make each single shape a gradient? white inside, black towards the edges. Also the background could black too, transparent

How does this work? c: Hey nice, this looks like some “metallic wool” bump
What intended is this gradient you did plus the one in its orthogonal direction, so that each little piece has roundness

Hey, sorry for the late reply! My girlfriend flew in and stayed for a few days. Is this what you’re after? I hope it is what you are looking for! 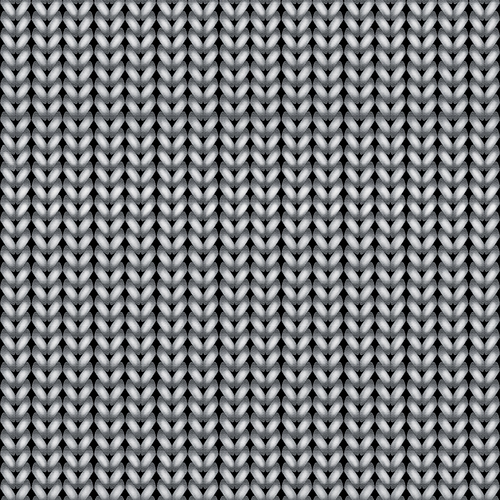 Why 4k with 16 repeats? Wouldn’t a single 256 tile be enough? Varying details could be done procedurally.

I’ve made something similar for myself (tiled model, then baked out some resulting maps), but I didn’t post it here as I thought this was more for procedural approaches. I don’t have it here at work though, let me know if something like this is interesting.

Couple of resources for reference

Fabric Rendering with the Thunderloom Shader
& A physically based shader for woven cloth. Contribute to Thunderloom/ThunderLoom development by creating an account on GitHub.

Only as a joke )
Fully procedural pattern 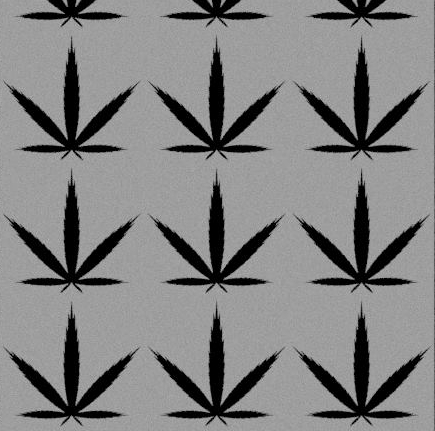 A friend of mine came up with this one, and it’s ridiculously useful, at least for me. It’s basically doing seamless generator (noise, voronoi etc) in one direction, meaning you can map it onto cylindrical UVs without a seam. It’s basically looking up cylindrical coordinates based on UVs. It is also kinda possible to lookup toroid coordinates for seamless in 2 directions, but due to perimeter radii being different there will be density variations.

But here is at least the cylindrical one, and I have to say, it’s simplicity is admiring 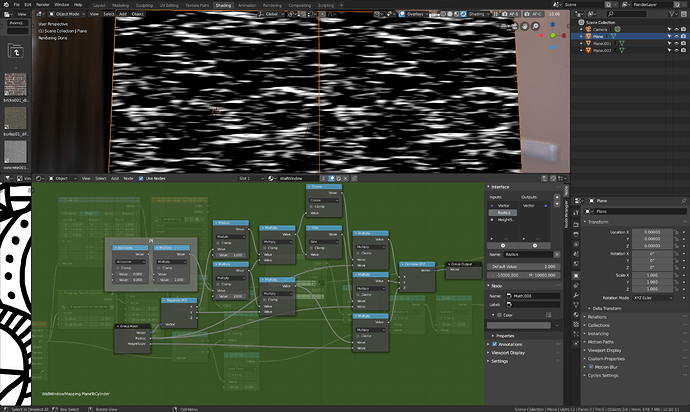 This is a fantastic one, so much to learn from this! Is there any way of converting this into Blender?

Here’s one approach (haven’t checked yet)…

Thanks @moxiecrimefight. This material is made with Blender and Cycles. I tryed to do a kind of metal with three tones: [image] I mixed two main colors with a facing layer weight node, and included a third color to darken the objects backwards. [image] This is an examples of setup: Normal: Roughness 0.04 / 0.08 [image] Glossy: Roughness 0.01 / 0.04 Ultra Glossy: Roughness 0.001 / 0.01 Rough: Roughness 0.1 / 0.08 Changing the colors and the roughness you can get several kinds of gold…

This is great stuff thanks for sharing, I’m late to the party.

But can anyone explain to a beginner what the glossy background node group is doing, and also in particular the dot product node.

many thanks in advance

Hi everyone, i just try to make a crocodail skin by using the guide in this topic and this is what i have made: Thanks for this, good work - any chance of the reflection and bump jpgs please?

This looks great, but the thread is more about procedural texture.

I’ve decided to make some brushed metal material/texture for solids of revolution that can have flat surfaces (like a sauce pan which has flat bottom). I hope somebody will find it useful. Anyway, questions, comments, critique are welcome.