I am new to Blender and I am trying to export individual multi layer exr files into Fusion Studio 16 for the purpose of utilizing cryptomatte editing. I enabled the cryptomatte in the render pass properties for object, material, and asset. I then setup up a compositor node as seen in the image attached. I am using the Reactor plugin’s cryptomatte. I know others have been able to do this. I just do not know what it is that they did that I am not doing. If anyone could help me out with this I would greatly appreciate it. I also attached a screen shot of my Fusion Studio node build. It is what you would imagine. There is no cryptomatte file embedded anywhere in the openexr. On top of all of that, I cannot find anything on Cryptomatte for animation in Blender. I only see people using through the compositor which renders single images. I prefer single images, but it would be nice to be able to compile them and cryptomatte in Fusion through the compiled finish.

So I think that I got it working with the file output node in the blender compositor. I am still not quite sure how to manage animation through individual files that are created by Blender and when the image file is a jpg file rather than a png file. I am sure that there is supposed to be more options that I cannot find that allow for a transparent background pass. If anyone has any tips on how to composite the animation in cryptomatte in a compiled form I would really be grateful.

I actually do not think that cryptomatte editing for animation is possible with a Blender and Fusion workflow, maybe Nuke. But, it was better designed for Maya that it was Blender where I believe that animation editing in a cryptomatte environment is possible.

Simply render animation as image sequence into OpenEXR Multilayer format.
If you want to use cryptomatte in Fusion, you don’t even need to use compositor nodes in blender.
Enable cryptomatte in Pass properties editor (as you already did) and render.

Go to Fusion > File > Import > Footage, navigate to image sequence.
It will be imported as one node (#).

Sorry if I misunderstood your question.
Note: tested in Fusion 9.0.1, but should be same in Studio 16 ??? 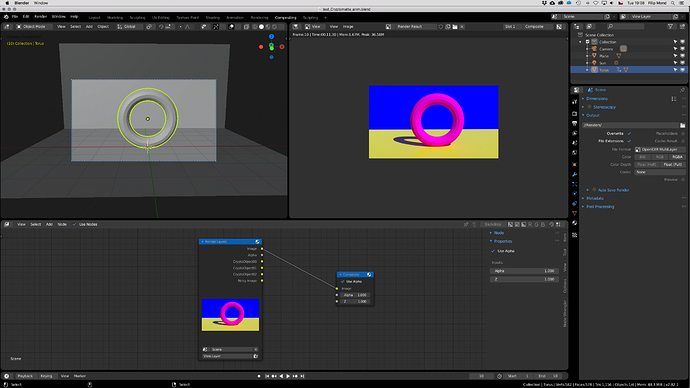 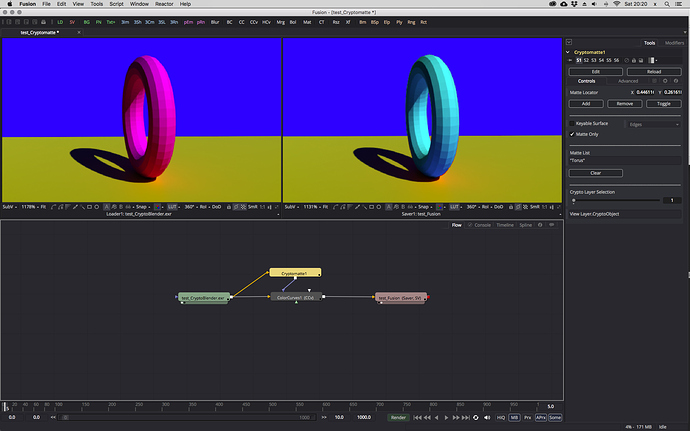 Oh, wow. I did not realize there was such an option in fusion. I am new to it and did not see any support for such a matter anywhere. Thanks a lot! That really helps!

Good to hear it helped, even two weeks after

hello, i cant not get cryptomatte to work with your method. fusion doesn’t even read anything from the render
i enabled crypto matte in passes and render them in 32bit multilayer lossless. without touching the compositor

even with the fileout put node fix, I still cant get it to work.


the last reply with the video is me.

i have cryptomatte 1.2.8 in fusion
am I doing something wrong. do I need specific naming or anything like that. I’m not such experienced and I can’t test the latest version since I used last free version of Fusion.
From your link to bug tracker, you can see there are some issues so there can be something.

You also wrote -it is working for “object” type, so … does Fusion even supports “asset” type?

So, did it work out for you guys?
Cause even I’m facing the same problem.

I am using Davinci Resolve’s Fusion and can not find “Fusion>File>Import>Footage”. I also rendered in blender 2.93 as a multi-layer EXR with the compositor disabled. I don’t understand how to set up the loader node in fusion to include the cryptomatte pass(s(?)).

After installation new window popups with list of plugins, search for Cryptomatte, mark checkbox, when installed relaunch app. Later you can acces this list of plugins (Reactor) under
Workspace > Scripts > Reactor > Open Reactor 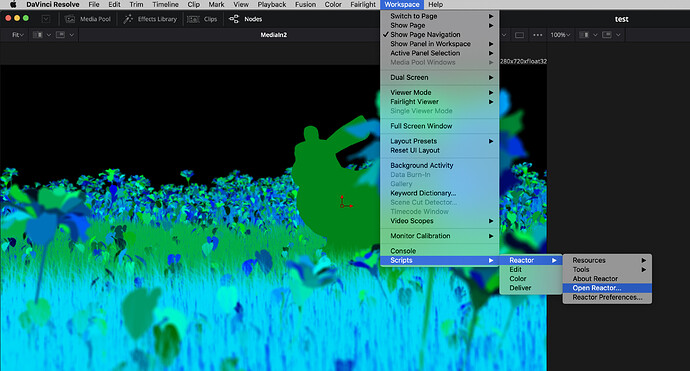 I had an issue to pick matte in Davinci (Fusion9 was fine) and found this report already from 2018 …
Cryptomatte can’t read metadata from DaVinci’s “MediaIn” node. 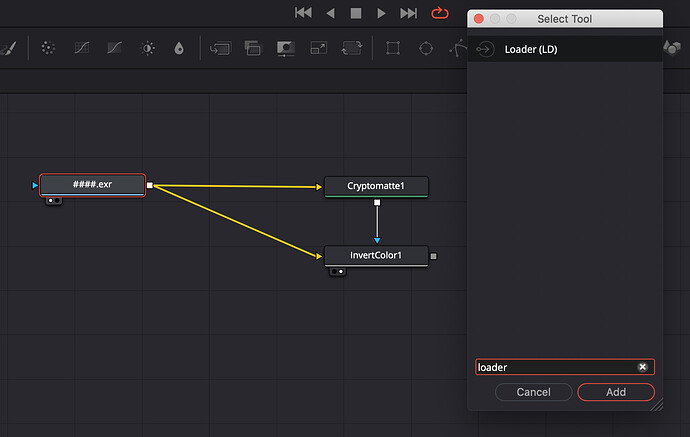 Also here is another Cryptomatte topic … because this matte system is not self-safe … a lot of ugly pixels on edges … in Fusion I found great node unMerge (for download post bellow in that link, drag&drop into node window) that worked as magic in that case. 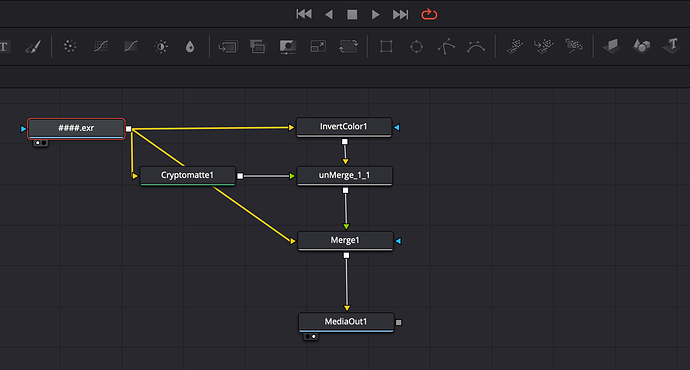 I had to edit my last two posts to make it clear for followers - to use Cryptomatte in DaVinci Resolve you have to use “Loader” node only (not “MediaIn” node).

That solves also your question with layers, because Loader node doesn’t let you specify them

Crypto Problem1906×919 197 KB
For some reason all of my objects/materials in the scene aren’t showing up on the cyrptomatte. I used blender “accurate mode” under the cryptomatte pass settings. (I am not sure exactly what this does.) I am also in Davinci Resolve 16 because I from what I understand it is more stable than 17 and I don’t need the new features. Could either of these things be causing the problem?
TACarp (Troy Carpenter) July 5, 2021, 3:19am #16

Solved: Thanks to this thread:

In short, use full float (32 bit) not half float (16 bit) for renders with cryptomatte pass.

Anytime you export for compositing you should save as 32 bit … thats the only one way how to keep all rendered data non cropped (lightning, depth, cryptomatte, …) — not easy to store amount of such data, but only one way to keep relatively freedom

Funny thing ran into that too. But material works, just object and asset brings up an error in Fusion 16/17.
Then I thought, maybe someone fixed in the last month… checked for an update… and indeed just a few weeks ago. Updated and worked