Started messing about with a Dimorphodon in Blender. Maybe try to get a 3D printed model out of this, it’s still at an early stage so I’ll have to see how it develops. 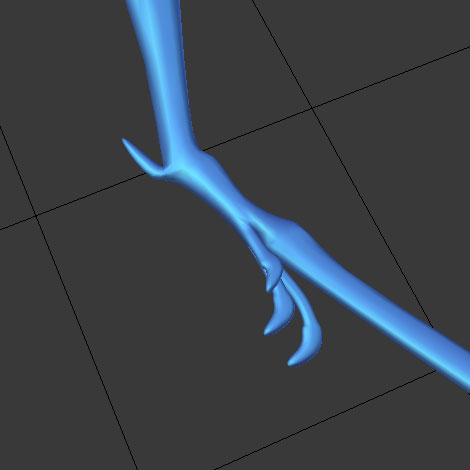 Been away from this for a while, managed to make some progress today.

Unified the mesh, wing membrane now has a thickness (which I’m sure is going to cause me issues later). Anatomically Pterosaurs are pretty weird, not sure I can get this working well, Trying to set up a mesh structure with regard to posing. Probably attempt something simpler next project.

The black grid (slightly under the model) represents 1m with 10cm divisions showing an animal with a length slightly under 1m and with a 1.3m wingspan (with wing straightened), cranium length is 20cm. Made a few tweaks to the flight membrane shape. The current thinking is that Dimorphodon was maybe a part-time flyer with short, broad wings, kind of like a pheasant or a grouse. 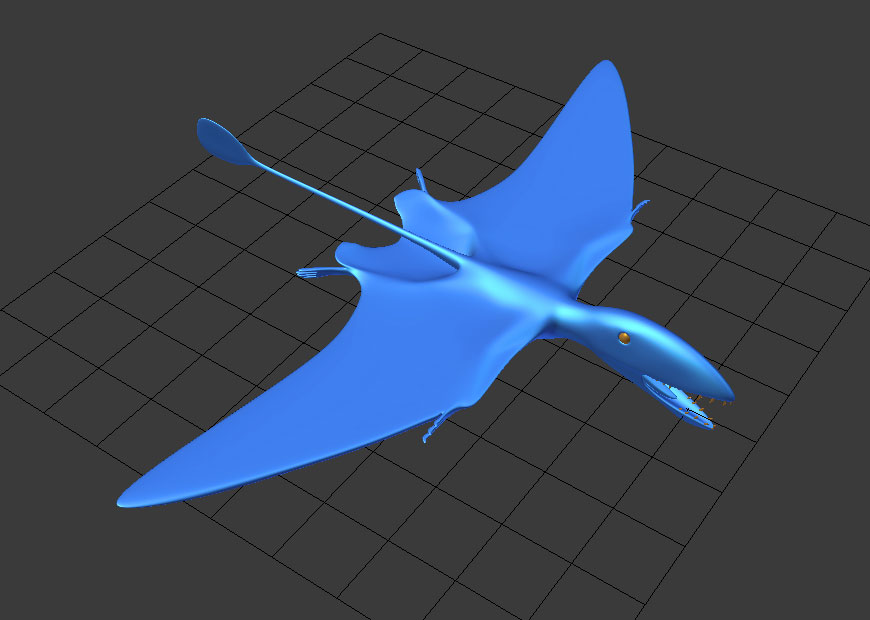 The once popular ‘Puffinodon’ concept is falling out of favour for various reasons (see Mark Witton’s blog). Rather than being a fish eater, it’s now thought that Dimorphodon was better adapted for hunting small terrestrial game such as lizards and insects. 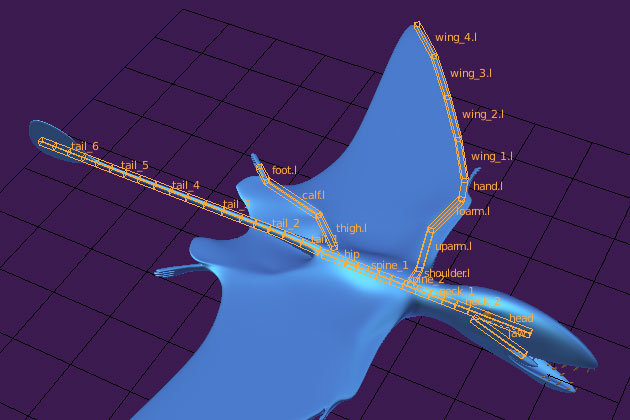 Started adding some deformers for head, spine and limbs (one side). For the front limb I’ve put in the shoulder, upper and lower arm, wrist/hand and the 4 phalanges of the wing finger (digit IV), still need to add some bones for the grasping fingers (digits I-III) and the hindlimb toes.

It’s Saturday afternoon and I’ve got the house to myself for a few hours so I think I’ll beetle away on this and see how far I can progress with it.

Starting UV mapping by separating the model into colour islands. These are used to define boundary edge selections for UV seams. Almost there with the rig, membrane controllers working but not perfect. That’s OK though, hopefully this will give enough pose range, don’t intend tinkering with this stage too long.

Made a sketch to use as a sculpting overlay, couldn’t resist adding a few labels and annotations. Not sure about the air-sacs behind the arm (in yellow), they are known (or believed to be likely) from later larger pterosaurs so I’ve added them more as indicator than intent. I doubt they would be visible externally so they won’t influence the sculpting. Made a UV map for Dimorphodon model, not the best use of space but it’ll do for my purposes. This step is unnecessary for a 3D print but useful for texturing if I decide to make some renders. Back on this after a long break. Had a look at the model last night and made (yet more!) adjusts to the base-mesh. This gif is just to try out a couple of poses.

Going to try to get this detailed quickly and turned into a 3D print.

This looks great! Really cool to see the attention you’re giving to the reference anatomy.

Also wondering how the wing membrane thickness is working out for you?
I’m actually dealing with a very similar situation right now and am cautiously avoiding adding any thickness to my wings. But this obviously means I’m unable to smoothly blend them in with the rest of my model…
The rig looks like it’s working great for yours though! I honestly thought you were doing a cloth sim there. Got any wing tips to share?

This looks great! Really cool to see the attention you’re giving to the reference anatomy.

Also wondering how the wing membrane thickness is working out for you?

OK-ish, the trailing edge of the membrane uses paired upper/lower side vertices and these are all puppeted by individual bones which I can move around to manage the shape. This isn’t too much work because I’m using a fairly low poly base-mesh. I think this works well enough for posing but animation would require a lot of counter-positioning.

I’m actually dealing with a very similar situation right now and am cautiously avoiding adding any thickness to my wings. But this obviously means I’m unable to smoothly blend them in with the rest of my model…
The rig looks like it’s working great for yours though! I honestly thought you were doing a cloth sim there. Got any wing tips to share?

If I were modelling for animation I’d love to try a cloth/softbody system for the wings but it’s currently outside my knowlege.

After asking a few Houdini artists, it seems like it won’t be too difficult to learn how to export an animated alembic from blender and get a fairly quick cloth sim going on the wings. I’m gonna try this out once I get some anim on my project, and I’ll come back here to share the results if you’re interested.

It’s always interesting to see Blender being mixed with other software so I’m sure a few of us here will be watching your project develop.

Found a little time today to run up some pose concepts. The plan is to do a walking and (at least one) flying version. Some think that Dimorphodon was also well adapted for tree-climbing so I might try one in a vertical posture to hang on the side of my printer Spent a couple of hours this morning with detailing (mainly carving out pycnofibers). It’s mostly done but needs a bit of muscle definition here and there. In reality the fibres were more fluffy than bristly but this will be a small scale solid model so fine details need a bit of exaggeration. Hmmm, well here’s an unexpected development. Some just published research shows that the more primitive long-tailed pterosaurs had hands which pointed forward and also the 5th hindlimb toe was in contact with the ground. This contradicts the (until now) current view of these animals and means my Dimorphodon model is now erroneous and out of date. Grrrr!

I haven’t read the paper as it’s not open access but Mark Witton discusses the main points on Twitter.

In theory I could change the underlying polygon model to match the new data but I’d still have to lose a load of sculpting work. It’s annoying but on the other hand, the paleo-nerd part of me is facinated by these new insights.

So taking all this into account I’m going to back out of doing the the walking or standing pose, apologies to anyone who wanted to see this version. Not all is completely lost, I think a flying version of the model is still generally OK so I’ll finish detailing and produce this pose only. I’m determined not to entirely scrap the project.

Going to produce a 3D print of the Dimorphodon in this flying pose. As I mentioned in the previous post I’m no longer doing a walking version now that science has overtaken the model as I made it. Should get the sculpting done this weekend. Saturday afternoon is quiet time. No idea yet how well this is going to work as a 3D print or what it will cost to order from Shapeways. Just going to go ahead with it and see what happens. Added some details last couple of evenings. Going to leave it at this and fix up a 3d print version. Under & upper side views. Lightly indicated actinofibrils on outer wing and pycnofibers on arms, torso & legs. I’ve applied the slightly curving flying pose to the sculpted model and I’m well into the process of converting for 3D print. Having a few issues getting the 3D mesh compliant but I’ll overcome them. Some finer details get lost in the transition but it’s a fair trade-off for small scale models.

Hopefully I’ll get a print ordered this week, currently I’m thinking 1/4th, 1/6th and 1/10th scale. I might prepare a graphic to show the sizes. The Dimorphodon project has been on hold a while (house decorating) so I’m probably not going to have a painted model for a while. In the meantime I’ve been thinking about what kind of paint scheme I could give it so I started messing about with these colour and pattern concepts. I’m thinking wing bars with an anti-glare area around the eye like you see in falcons. This is the first colour idea, it’s quite hawk/kite influenced. This is just a first pass but I think it’s OK, I might even go with it. Could be worth trying something with green or grey as a base. I’ve been looking at photos of flying lizards and they’re quite mottled, don’t know if I want to get too complex with the detail.