This addon was created to offer an easier alternative to blender’s default bake system.
It was designed to automatically match “low” and “high” objects and collections, and it offers a few more custom passes.

Here is a tutorial made by @mrgesy in which he explains how the addon works: 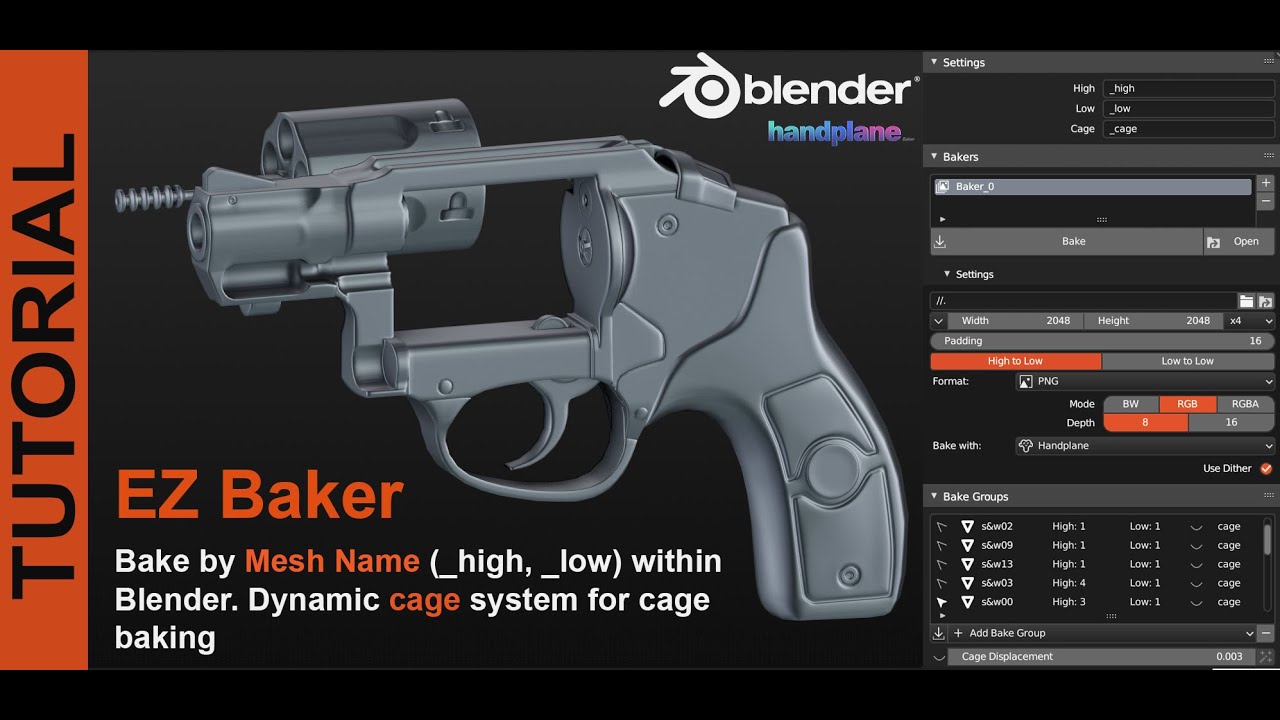 Each baker stores the most basic bake options (texture size, output path, padding…).
Multiple bakers can be created to export with different settings. 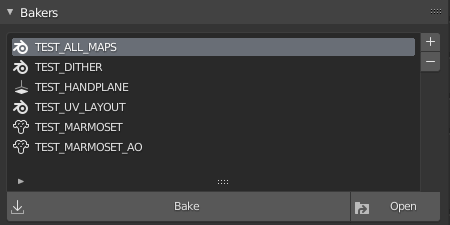 Each baker can be configured to bake with one of three supported devices:

Each device has its own set of settings to configure. 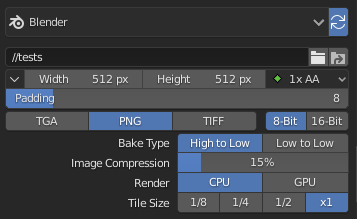 Bake groups are dynamically populated based on the objects or collections that are in the scene.

e.g. If you have two objects named “test_high” and “test_low”, the option to create the “test” bake group will appear.

Once the bake group is created, any new object that matches the naming conditions will automatically be added to it.

It’s used for baking objects that are close together without intersecting issues, or to specify different projection cage settings to each one. 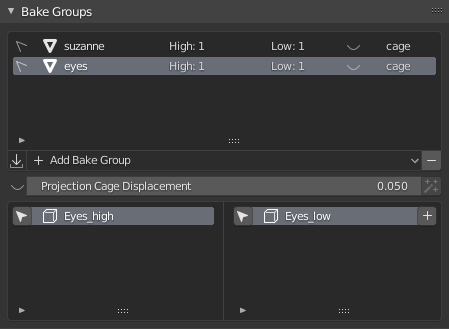 Projection cages represent the distance from which the rays are cast when baking. EZ Baker lets you edit the cage displacement value and at the same time shows a visual reprentation of the cage.

Custom cages are automatically found by their names.

To use a custom cage, make sure it has the same name as the low object but with “_cage” at the end of its name. e.g. “myobject_low_cage”

(Currently not supported for Marmoset Toolbag)

The desired output images are configured in this panel.

Each device (Blender/Handplane/Marmoset Toolbag) has its own set of maps to choose from.

For each map, you can specify the output image suffix and some specific bake options. 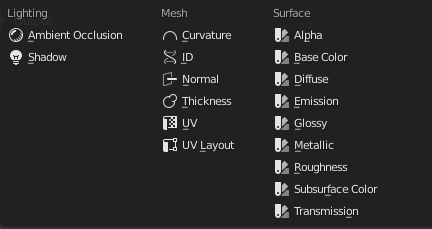 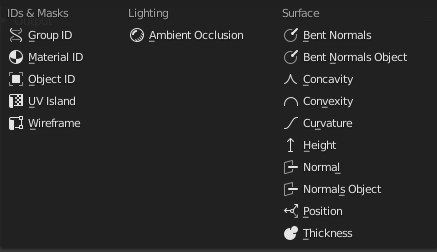 Once the bake process finishes, all the generated images can be viewed in this panel

An easier baking solution for blender

If you like the addon, you can support me on ko-fi

Awesome. It’s like baking in Marmoset but in Blender. Just what I was looking for!

Thanks for developing this.

I installed it (haven’t had chance to test yet) but noticed you reference C:\Program Files\Handplane3D LLC\Handplane Baker\ in the prefs section.

I am using a mac so this path will not work with the os however is the handplane baker addon also required?

I attached an image showing the path Hi,
There is an option in the baker settings that lets you bake either with blender, or with an external program, this external program is called Handplane3d. it’s way faster than blender when creating maps and it’s free. But as far as I know, it only works on windows.
The path you see in the preferences is the default path where this program is installed. If you don’t use it you shouldn’t worry about it

Great, thanks for the explanation

One sentence: Hudge Thanks and congratulations!

I need to try this

(Would you check BakeLab 2 to nitpick which features can be included in your addon?)

I have no idea about Marmoset since I use Substance Painter, btw it sounds like Matching By Name (sounds great)

This looks great! I may actually try baking here instead of exporting to Toolbag now.

One suggestion would be maybe adding the ability to bake the bevel shader. That would be amazing to have!

There is cage baking and automatic cage extrusion which is usually set to 1. It seems to be better than ray distance especially for hard surface objects.
Bake group is actually like Marmoset, it isolates a group of low/high objects which are supposed to be baked together separate from other objects, to avoid ray intersections.

For that, it seems this button can enable that -From the gitlab page, “Once the bake process finishes, all the generated images can be viewed in this panel” it mean that the preview will be visible upon the mesh itself? If not, it will be possible to include it?
-The “Triangulate” checkbox inside Normal Map setting use the ‘beauty’ method?
-What the “shadow” baking does?

Thanks but I actually meant this: https://youtu.be/jf9GIJ6W1HU

The thing you showed would be good for when you need an AO bake that doesn’t include the high poly info.

Your link doesn’t work.
edit It works my bad
I think the low to low will work because your low poly duplicates itself into a low and high and bakes the bevel shader from the “highpoly”. I’ll do some tests

I’ll take a look, for now I wanted to add the rest of the surface properties (roughness, metallic, subsurface etc) but if you are missing some specific feature feel free to post it here or add an issue in the gitlab page.

But it won’t work right now

I believe I’ve fixed it in my end and I’ll upload the fix with the next release.
For now, you’d need to duplicate the mesh and use it as high

I linked the BakeLab 2 addon in a previous comment, it can bake roughness metallic and much more. Peraphs you should use a mixed approach?: when Handplane is enabled the baking process will also use Cycles just for those peculiar maps that Handplane cannot elaborate. So this way Handplane will bake nice and really fast AO, normal maps, curvature and cavity etc, then cycles will handle the other kinds of textures.

(Any idea about AO for floaters?)