How BAD is the Extrude Manifold Tool on Blender?

Hi Guys, I recently made a video exploring the extrude manifold tool on Blender. But I tested it working on a real project. It was designed by the architect Natalia M. Brasil and I’m working on the 3D modeling process for this piece.

I would love to know your opinions about this tool and how blender foundation can improve it to make it perfect.

In my opinion, the tool is a step in the right direction, but need to be polished.
What do you guys think? 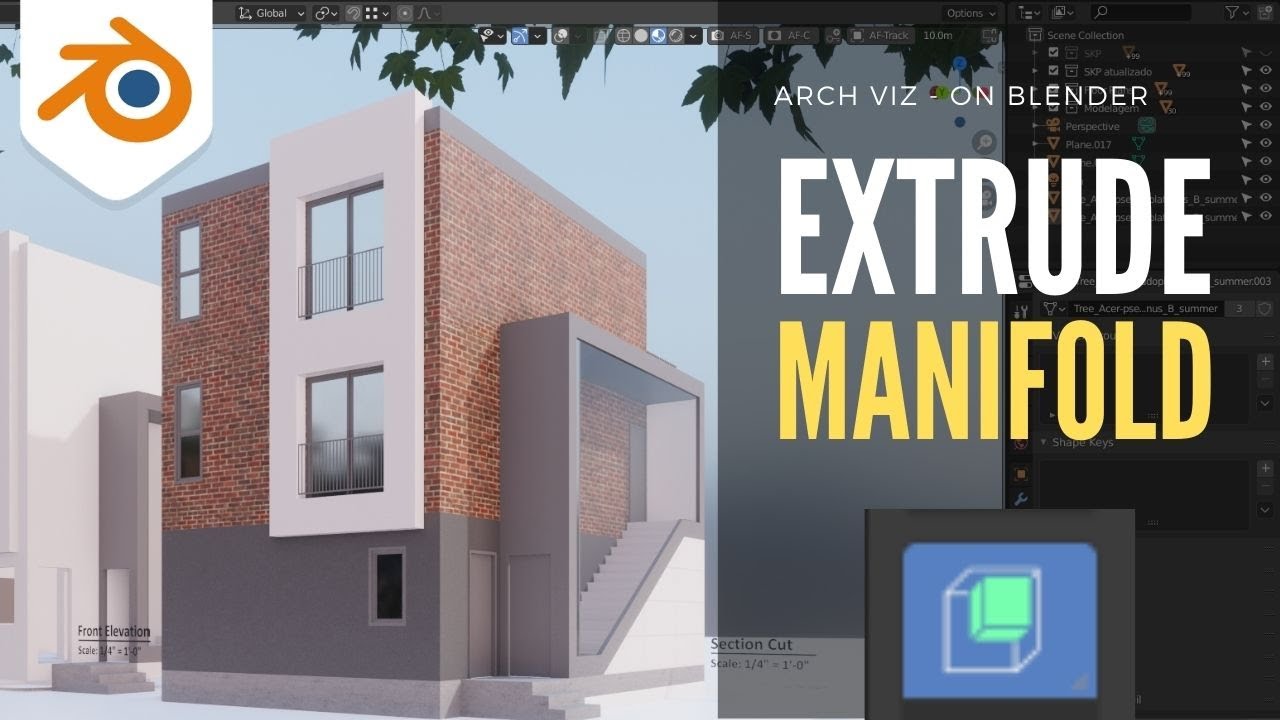 Germano at one point was working on allowing people to ‘hole punch’ meshes by extruding a face downward and out the back of the mesh, but he never committed anything.

As for lack of polish, in Blender land we call it tradition (as lack of attention to things like polish and usability has been a sizable part of development since I started using Blender in 2004). Fortunately, the last year or so has started seeing more attention toward those two concepts, something that is being reflected in the dev. fund.

Any blender user will agree that an option to delete end is needed.

It is pretty BAD compare to Max.

With Max’s new functionality, he could have even pulled the top face of that cylinder he attached to his initial object all the way through to perform a clean boolean operation. Extremely fluid and straightforward way of modeling that seems so obvious as the way things should work.

This is bar none the smoothest hard surface shape building workflow on the market now. Blender could have been ahead of the curve here, but getting developer interest (or even attention) to polish and improve tools the moment beyond their initial implementation is simply not a thing that happens.

Also, since this HAD to be implemented as it’s own tool instead of functionality within the move tool/gizmo, it’s likely that it will never be possible to do the really impressive move-merging/booleaning to any point in space that intersects with other geometry because it’s now bound to the local normal of your selection. It should have been a toggleable hotkey from within the move, scale, and rotate tools.

Why wasn’t it? Because a new tool was the path of least resistance, and now we’re permanently hard-locked into inferior functionality.

Just feels like a huge lack of foresight and thought (or a lack of gathering and listening to artist feedback) in order to get the minimum idea out and implemented quickly.

The approach the Blender devs. take on tools is usually this; Get it working first, make it pretty later.

Now it is true that premature optimization and polish can get in the way early on, but there has been many cases where the Blender devs. forget completely about the ‘make it pretty’ part. This is something I am hoping they can start resolving with the new multi-dev sprint approach, which in turn is made possible by the massive funding the BF is getting now. In a way, this is already the case in a couple of new tools like Geometry Nodes.

It is not just Blender either, this has been an issue which historically has been nearly exclusive to FOSS. However, commercial users are complaining all the time about tools that do not seem polished, so there isn’t a simple case of “behold the superior power and might of closed source”

The more Blender developers keep throwing in, the more resources is needed to polish later. At some point, you can’t just keep up at all.

Polishing and making performant is actually very boring and often difficult job. Users usually don’t even appreciate it. They think the polishing and fixing would just “happen” somehow. Also Blender uses are pretty forgiving because “It is free”.

All this give Blender developers very little reason to polish and make it fast. Just keep adding new features are a lot more fun and easy.

I hope that new tool in Blender would do the same. But right now there are some trouble with boolean algorithm

Max doesn’t use boolean for this.

I do know the exact boolean algorithm can be a bit finicky with faces or edged that should look aligned, but are not exactly aligned if you manage to zoom in close enough (ie. not perceptible when looking at the model).

I did once propose an addition to the exact boolean which would add a pre-process to ensure faces and edges of the boolean volume overlap exactly with the faces and the edges of the mesh if they are extremely close (so as to avoid bugs). It was never developed.

Yes, it’s pretty embarrassing how Blender’s implementation ended up. I’ve created a thread about it in Devtalk quite a while ago, but it got burried:

What is going on with Extrude Manifold?

Hi, does anyone have any idea what is going on with Extrude Manifold? It was added couple of versions back in a broken, unusable state, but it’s a new feature and yet it has not been fixed since. 2.93 is around the corner, and in the latest alpha it...

Maybe go make some waves there so that they know it’s important for people. New features should not be left in such a sad state.

A fresh patch revision has been made.

Germano essentially overhauled the fast boolean operation to deal with co-planar faces, so there shouldn’t be any problem making perfect cuts on the edge of a subdivided surface now.

Sir Any update ! Today 3.2 is released and we are still waiting for this happen.

New Hair Curves object should end-up in 3.3.
Developers created a new internal structure for that, shared between Hair, Regular Curves and Geometry Nodes. It should end-up being used by Grease Pencil, too.
That is a big task freezing most of other todos about modelling.

Thanks Dear for the update, I wish Blender gets more developer so that all these feature gets in as soon as possible.