Is there anything else you should know about collection instances?

I’ve seen a few youtube videos recently claiming to show all you need to know about collection instances. They leave out a lot of useful information.

The first thing you should know is that a single object can exist in multiple collections. I haven’t seen a tutorial mention that since around the release day of 2.80.

Something plaguing tutorials lately is they don’t demonstrate multiple objects in a collection being used as a collection instance. I’m still seeing many comments asking about this basic thing.

Most importantly let’s talk about the origin point of collection instances. You can set it to anything you like. You do not have to keep all of your objects at the world origin if you are planning to use them as instances.

One way to do it:
Select any object that is in the collection you want to instance.
Put the 3d cursor where you want the origin point of instances to be.
In the object properties of the selected object look for “Collections” and then the name of the desired collection.

Another way:
Make an instance first.
Select the instance.
Menu > Object > Set Origin > { whichever one is best for your needs }

What this does behind the scenes is exactly what you did manually with the first technique.

image1114×428 86.3 KB
In this scene I have a single Mr. Potato Head toy comprised of 15 objects (hat, left ear, nose, etc…) in a collection named “potato”. This collection has it’s origin set to the ground plane beneath the feet. I use instances of “potato” for all toys that are standing upright.

I did a similar thing for a collection named “face up” where the origin is on the backside of the potato body.

Finally there is a collection named “hanging” with the origin on the inside of the right arm. Hang one instance of that, duplicate and move it, shift+r several times, select all of them and randomize tranforms ( y rotation ) so they aren’t all hanging in exactly the same repetitive orientation.

The next likely problem you might have is “what if I want to move the original Mr. Potato Head toy objects somewhere else?”

Before moving the originals, add an empty to the collection and place it exactly in the location that the collection is set to use for the origin of its instances. Move the objects AND the empty at the same time so that the position of the objects relative to the position of the empty does not change. It would proably be best and easiest to just make all objects the children of the empty and only actually move the empty.

After making the move, snap the 3d cursor to the empty, select any object in the collection, and do what I showed earlier:

image848×414 51.5 KB
.
Now every instance used all over your scene will snap back to where you originally wanted them to be.

The POINT IN SPACE where you originally placed the (origin point OF the) instances never actually changed, only the objects relative to the point in space used as the origin of the collection is what changed. When you changed it back, they all visually changed back. Select the hat, duplicate it, name it “fancy hat”. Select the original hat, go to its object properties under the Collections section and delete the one where it says “oddity” to remove it from the oddity collection (or any of the several other ways you can remove an object from a collection without deleting it). You will still see the original hat because it still exists in the scene in exactly the same place as the new hat. 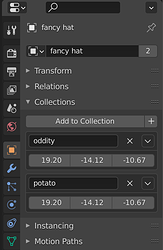 Give the “fancy hat” object its own material.

Select one of the hanging toys. Under its Instancing properties where it says “hanging” change it to “oddity” 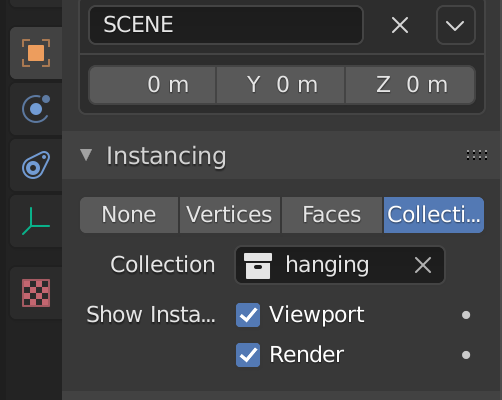 The origin point of “oddity” is between the legs like the original “potato” while “hanging” had its origin point on the arm so it won’t be an exact match but it will be close enough that only minor a minor location change is needed to put the odd toy in the right place. Duplicate the “hanging” collection. This will give you a new collection with the same origin point settings as the old collection and containing a new instance of “potato”. Rename the collection to “hanging oddity”. Select the potato instance in there. Change its Instancing value from potato to oddity.

Select one of the hanging toys. Change its Instancing value from “hanging” to “hanging oddity”. DONE!

If anyone has more info about Collections and Collection Instances to share, please do.

Informative. Thank you for sharing your knowledge.

Yikes. Made my head hurt. THANKS!

I always tend to watch the videos from Daniel Bystedt very carefully. He also explains a bit now and then how he does things. I think most things you explained here, he also explained in video’s.

Its quite powerful method of using items

To the post can be added current limitation and expetations maybe?

For example a complex mechanical model and rig that is dependent on world coordinates in some way, I had this problem using curves to control a chain in my traction engine.
I could not rotate the whole model without messing up the chain curves.

I instanced the whole models collection (many objects) to a new scene to be able to freely move it around (as if it were one object) without worrying about the world coordinate dependencies.
I used the scene with the instanced model to drive and turn the engine around in “the world” and the original scene to animate all the mechanical bits.

I am now doing something similar with a smoke sim, making the sim on its own in one scene and instancing it to another with a train.

Hi. Thank you for your explanation. I have a doubt: What is the difference in terms of memory saving between using Alt+D andd Collection Instances ?

I could not find a clear comparison.

Memory wise it’s the same.
In both cases you’re using the same data for the ‘copy’.

Workflow wise it depends what you want to do. If it’s just a couple of ‘copies’, Alt+D would be fine here.
If you’re working with assets, the Collection Instances workflow would be more suitable I guess.
For the latter, you can ‘group’ more objects inside, and it’s easier to tweak/select as a group if needed.

Thank you a lot Rob! Also to @thinsoldier I was having a hard time setting the right origin for the instances.

I sometimes make an empty named “this collection origin locator for instances” and place it where I want the origin to be. Then snap 3d cursor to that empty and do the “set offset from cursor” thing: https://blenderartists.org/uploads/default/optimized/4X/5/2/f/52f96a355e97940c368b73ceb197dfea93f6c9a3_2_690x336.png

Hello everyone!) I have a problem with the blender collections. Specifically, every time I open the file, the collections are expanded. I have scenes with a very large number of collections, and when I want to find the collection I need, I have to collapse all the collections again. This is very annoying and inconvenient. Moved from 2.92 to 3.0. By the way, at 2.92 I did not notice this. I could not find an answer to this question (maybe I was looking badly), is there a way to solve this?

select an object in 3d viewport, put mouse over outliner, and press “.” period key on numpad.

One can also use Numpad +/- to gradually expand and collapse the collections.

Is it possible to make the collections collapse by default when the scene is opened?

Has anyone tried to copy/paste an instance collection from one scene to another in Blender 3.0?

It pastes the instance collection AND all the individual objects into your new scene. You get them twice now and I don’t know why.

There is no naming conflict. If there was a instance collection of two cubes for example:

So, you get a total of 4 cubes into the scene.

I can’t put the reason why into words but that’s what I’d expect with copy-paste. If you only want the collection instance you’ll need to use File > Link.

It’s the first version of Blender to work this way with copy/paste of an instance collection.

I have catalogs of assemblies that are instanced together. I’d normally open several catalogs and batch copy/paste what I need into a new scene. So far, it’s difficult finding a workflow in 3.0.

Should probably report that as a bug if it used to work much more conveniently in 2.9