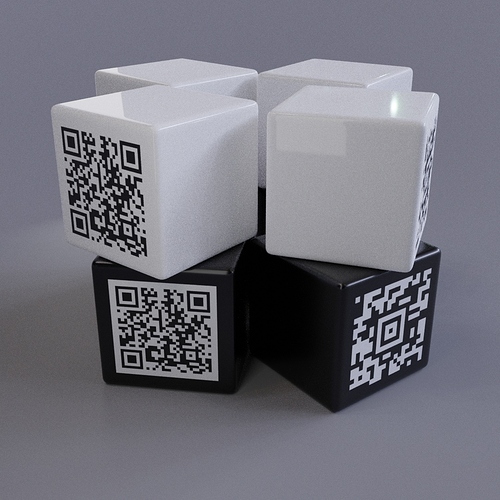 This addon allows you to create various barcodes as meshes. It currently supports QR, MicroQR, PDF417, and Aztec codes.

This project now has a github. Feel free to contribute if you feel like it.

This addon started life as the Local QR Code addon by Jacob Welsh. I previously updated it to work with blender 2.8, and have since greatly expanded it. Since it now supports more than just QR codes, I have renamed it to Local Barcodes.

This is my first real addon, and my first foray into BPY and python beyond just updating old addons. The code is probably messy, and I’m sure there will be bugs. Let me know if you run into any problems.

These currently only work in Object Mode. They might half work in edit mode, but if they do, it’s unintended.

Summary of the barcodes:

While this addon does not yet support 1D barcodes, I can recommend the 3 of 9 font. It is a code 39 barcode. If using it, remember to start and end the text with * symbols, as they are used as beginning and end markers.

I personally use these barcodes with Decal Machine to turn them into decals, but as they are meshes, you can do whatever you want with them.

The reasoning behind the “Local” in the title is that this addon uses no online services to generate barcodes. It generates them entirely locally using a few different open source libraries.
The libraries used and liscenses are:

The most reliable Android apps I have found for scanning the less common barcode types are Scan Them All - 2D & Barcodes and Neo Reader.

Nice work man! A while ago I already used your updated 2.80 version of Jacob Welsh’s add-on to create my QR-codes, among others for my twitter, so I really appreciate what you do here. Thanks a lot and I’ll certainly check out your new add-on.

As apps are concerned, I can recommend having a look at the f-droid repository, everything there’s FOSS and privacy-minded. There’s quite a selection although I personally use ZXing’s Barcode Scanner. (not affiliated)
https://search.f-droid.org/?q=qr&lang=en 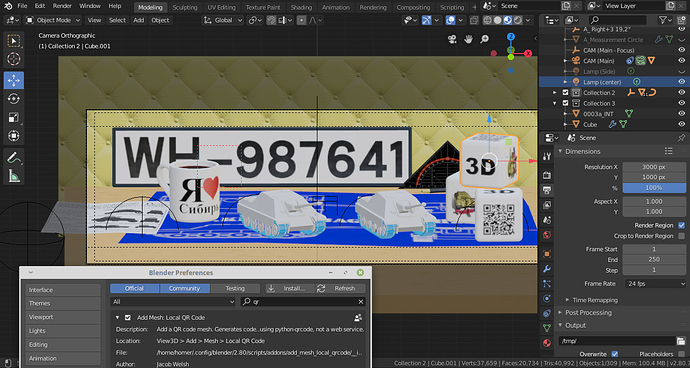 Oh, quick question, do I need to de-install the old (i.e. Jacob’s) add-on for your new one to work?

Hey that’s pretty cool. I use qrencode(for terminal) occasionally, but having this directly in Blender is super cool indeed. Thanks for the mention of DM too!

Is this on github somewhere? I may want to tinker with it and add background + FG/BG color support.

Hey that’s pretty cool!
Nope, you don’t need to uninstall the old one. They will work perfectly together. I had the old one installed for most of this ones development. I’m pretty sure I covered everything the old one did tho.

Nope, as i’m just learning to code, I haven’t learned to use github yet. I’ll see about getting it set up soon.

I’ve now set up a github repo for this project. It’s in the main post.

Hi, I installed the add-on but when I tried to enable it in the add-on list I got this error message. Any instructions?

Aah. My bad. I never tested without PIL installed. It is not even used, so this shouldn’t be hard to fix. I’ll see what I can do.

I just updated the plugin. It should fix the problem. Let me know if it doesn’t.

Thanks for looking into the matter but I’m afraid there’s still some problem. I installed the add-on from your github but it doesn’t appear in the add-on list, so I could enable it.

AH. I forgot that blender doesn’t like “.” in it’s addon names. I’ll fix this on my end, but to fix it yourself, just replace each “.” in the addon folder name with “_”

this is great! Thanks =)