I did a number of tests, and there are structural differences between the topology results of ZRemesher V2 and V3, also on organic models (sometimes only minor differences though). It’s probably the new way of scanning for hard edges that affect the results, or an altered algorithm altogether.

The alternative Alt + ZRemesher algorithms also differ from each other when the Legacy button is activated or deactivated. So you’ve got four chances of achieving the topology you’re looking for since the release of ZBrush 2019.

I wonder if Maxime has used the same algorithm for ZRemesher 3.0 as he used for QuadRemesher. It seems a bit unlikely that he developed it as an improved feature for Pixologic, and would then be free to sell it himself as a plug-in for other 3D editors. Unless Maxime is a tough businessman who has chained Pixologic to a smart licensing deal.

I would rather guess Maxime has left Pixologic after creating the previous ZRemesher years ago, and has now created a new algorithm to sell himself, while Pixologic’s developers coded their own changes to ZRemesher.

I could ask Maxime, but I don’t want to bother him too much.

Metin, please tell the dude to “chop-chop” and give us the dang thing already! I don’t care if it occasionally crashes and whatnot… I NEED this mofo… like yesterday! I’m ready to pounce on a subscription the very minute he has it ready.

I’ve sent Maxime a new e-mail yesterday, informing him of the growing interest in QuadRemesher for Blender, and suggesting an option to reproject vertex colors after QuadRemeshing and subdividing. I’m patiently waiting for his answer. I’m afraid if I e-mail him too much he will add me to his spam blacklist.

I would rather guess Maxime has left Pixologic after creating the previous ZRemesher years ago, and has now created a new algorithm to sell himself, while Pixologic’s developers coded their own changes to ZRemesher.

Quite the opposite. He left Pixologic in 2010 and created Qremesher(later named Zremesher) AFTER leaving Pixo. It was created as a plugin, and is still maintained by him. ZRM and the DCC QRM plugins are essentially one and the same.

You, Sir, are a true 3D CG insider. I am impressed.

Euphemism for a N.E.R.D

You guys gotta stop bothering this guy if you’re not actively helping him develop his tool. There is nothing less encouraging or more annoying as a coder who has to solely support a commercial product than a user base that is perceived as needy before there’s even a product available to them.

Let him work. Let him be in his zone as much as possible. He wants to make his money much more than we want his tool, that I can guarantee, and that means he’s working as quickly as he can.

Rest assured, I’ve only e-mailed with Maxime to aid development, including answering some questions he had about Blender.

looks interesting (!) but there have been so many tools hailed as the “retopolizer to end all!” that we best wait and see how much it can aid in production. For 100$ I expect a tool that is atleast on par with Zbrush’s retopology tools.

Read above ^… dev is same dude who made ZRemesher for Pixo. And our addon that is coming is the same as the one that is currently available for Max and Maya… i.e. it is being ported to Blender. Subscription initially will be $9.99/3mos, so at only $3.33 a month, maybe you should go that route until you are convinced if it is the retopo to end all…

Blender has face maps now, which are essentially the same thing as polygroups. They can be found on the object data tab and work basically the same way as vertex groups, but with faces and the added limitation that a face can only be assigned to a single map, which I am fairly certain is the same for polygroups so it shouldn’t be an issue. Might want to clue him in on those, as it would probably make more sense then messing around with materials.

That aside, the price is more than I can afford though, so I won’t be bothering with this, but I know a lot of people love zremesher, so it’s nice to see a version coming to Blender.

It still says ETA: October 2019 on exoside.com. So that could be anywhere from less than a week to around a month from now. Yippee!/D’oh!

It’s here. They have released the quad remesher for blender. You can get it from exoside now.

Hey there,
I’m glad to announce that QuadRemesher addon for Blender is released !
Hope you will like it.
Happy remeshing.

I think the Windows blender download is missing some files. There’s only the addon files, no DLLs or EXEs that I assume the bridge addon uses.

edit: Oh, I guess it downloads stuff on the fly.

edit: You should put preferences in directories relative to the blender config folder, not AppData(in Windows). This allows different Blender versions to have different configurations/preferences and not step on each other.

Amazing! Can’t wait to buy it at the end of the month

Just downloaded and tried it on the 2.81 Alpha. Works like a charm. Did a quick comparison between QuadriFlow and QuadRemesher when remeshing the same object at 4k faces: 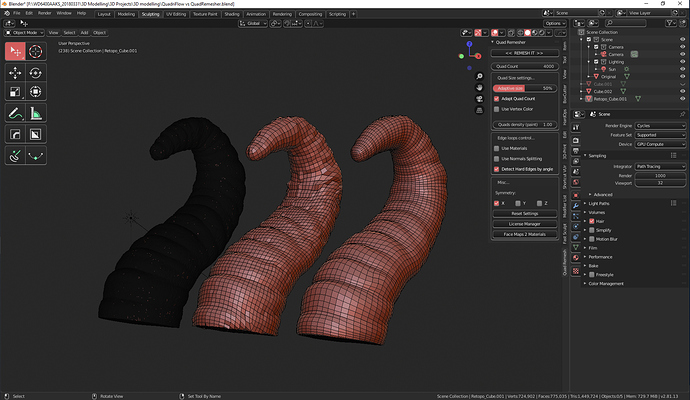 Well, I sure am convinced of wanting to buy this. 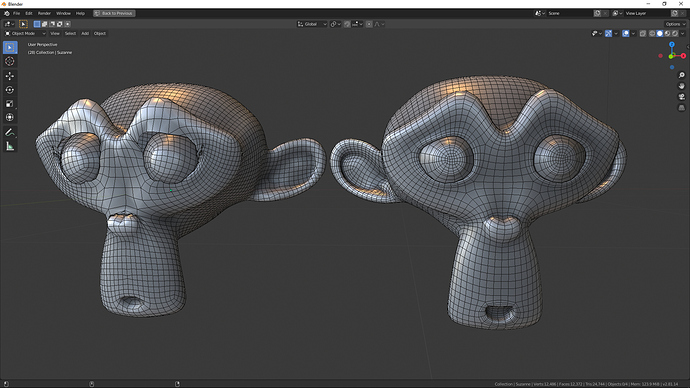