I was able to download it before it was removed, but if there are paid textures in there, I don’t think it would be right for me to share all of the work put into making it without permission…

Here is Ian’s quote in the above mentioned post:

That was my bad. Apparently anything hosted on the blender server has to be completely CC0, meaning you can take any part of it and sell it. And I had a few textures that are fine to use in renders and pass around in project files, but not just straight-up resell, so until I can redo the scene with completely CC0 textures, it’s gotta stay down. I didn’t realize the restrictions were so stringent

That means it’s free for personal study and use, the objective of this thread. If you can share it here me and many others would appreciate, if not np.

. . . it’s free for personal study and use, the objective of this thread. If you can share it here me and many others would appreciate, if not np.

Yep, there have to be more downloads of it out there – it’s fine to post non-commercially, hopefully somebody who has it will be willing.

I’ve mentioned it in that YouTube vid’s comments, but somebody’s been guilt-tripping and harassing the admin about it, s/he might be feeling raw.

There aren’t any downloads. That’s weird, I’ve seen some folks claiming they downloaded it and I’ve asked a couple of them myself and they both said they won’t share due to supposed copyright violations. I don’t know why those folks aren’t sharing it since it’s so trivial, but it has nothing to do with copyright.

I want it because I think I can learn something for the project I’m working on. And like I said, I don’t know what is going on but it’s a waste of time. If whoever has it wanted to share, he’d have done it by now. Better off wait Ian himself to share it.

Sorry, I meant that more than just a couple people had to have downloaded it while it was up – hopefully one realizes it’s okay for them to make it available to download, and is willing to do it.

Today was the 2.83.1 release, frustrating that the splash screen’s .blend file isn’t back up on the Demo page yet. That Youtube vid really whet my appetite for it.

For the people who downloaded it and were feeling a little too precious about it, there you go:

WARNING: the licence of this file is for non-comercial use only (according to Ian himself), by downloading you agree with it.

WARNING: the licence of this file is for non-comercial use only (according to Ian himself), by downloading you agree with it.

The new version went up this morning – thanks Ian!

Just FYI: the .blend file for the 2.90 splash screen is up! Get it fast – the blurb says it has textures from Texture Haven in it, no idea how long this version will stay up.

Yeah, I figured that out after I posted – once burned, twice shy.

Just FYI: the .blend file for the 2.91 splash screen, Red Autumn Forest by Robin Tran, is up at the demo page.

Just FYI: the .blend file for the 2.92 splash screen, Sinosauropteryx Prima by Joanna Kobierska, is up at the demo page.

With the 2.93.0 beta out we can see that the splash screen is Procedural Still Life - Geometry Nodes Experiments by Erindale Woodford, but the blend file isn’t up at the demo files page yet.

They posted the artwork to these forums:

I’m working on developing a style that’s taking advantage of the new Geometry Nodes tools. Super powerful already and only going to improve. There’s really no way that I would be able to have made this previously. This image is just the render with some colour grading, all the smudges and dust etc are in the scene. It does still take a little bit of coaxing and being able to work around the maths to get Geo nodes to bend to your will but once you have made some presets it gets a lot easier. […

And you can see the Geometry Node setup here: 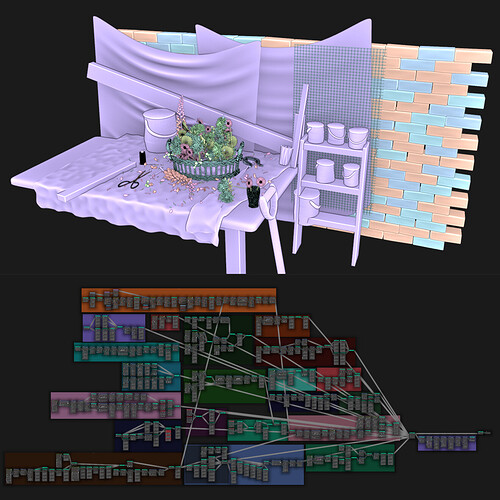 Currently undergoing some cleanup and annotations, removing non-cc0 textures etc. It will be added to the demo files for the stable release though! I’ll try and share it in this thread as well once it’s ready

Much appreciated, and congrats on your art making the latest splash screen!

The file will (should) be included with the 2.93 stable release but for now it’s available for free on my Patreon. You don’t need to be signed up, there should be a link to grab the file under the post:
https://www.patreon.com/posts/50582398

Got it, thanks oodles!

I’ve prepped the splashscreen file to be a bit more approachable and annotated and to have only procedural or CC0 textures. There are some of the Toolkit nodes in here but for updates you’ll still need to buy the toolkit through Gumroad or Blender Market.

— quoted from the Patreon page

Yeah, the Toolkit nodes could come a’cropper of the splash screen demo’s all-CCO requirement, especially given it’s a for-money add-on made by the same person who made that splash screen.

The node product I sell as GPL3 and the project file is CC-BY so they should be fine. People getting the nodes through the project file won’t get updates to the nodes, some of which have already been entirely remade, so I’m sure it’ll be a-okay!