The Basilica of Maxentius at the time of Piranesi 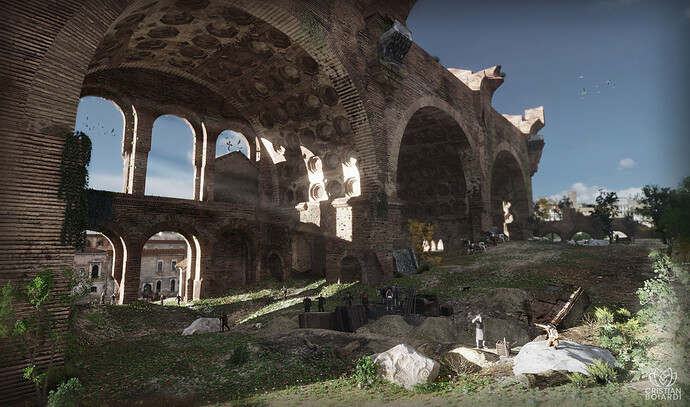 Made with Blender 2.92, rendered in Cycles 4k at 400smaples with Optix denoising. Compositing in Blender and Post Production (to improve chromatic tone) in Photoshop.
Good morning guys! post my latest personal project:
3D transposition of a Piranesi print which has as its subject the ruins of the Basilica of Maxentius in Rome.
Compared to the original you will notice some differences related, above all, to the perspective lines and lights.
And here a little historical digression is a must (but if you don’t have time, stop here😅):
From the mid-1600s to the 800s it was fashionable to travel to Italy, on the trail of ancient classical culture, this trip took the name of “Gran Tour” (the roots of that romantic art that will soon arrive in my opinion, we can already find it here. Goethe himself will write about his trip to Italy). Around it flourished in Italy a very dense production of real souvenirs ranging from representations on canvas / engravings and etchings to the production of objects and fakes for which the Granturists (belonging to the nobility and the upper middle class) went crazy.
In the case of the representations of the ruins the artists often took licenses aimed at exasperating the monumentality overwhelming with respect to the human, a symbol of the monumentality of the culture that generated them.
This is to say that in my 3D reconstruction I could not force much the laws of physics, light and perspective

Great job. It’s always a challenge to translate a 2d work into a 3d model due to the reasons you mentioned. I think you did a good job here. I always loved that monument but never managed to get a tour inside. I bet you already know but the basilica it’s in John Wick 2, and they are having a party inside it! Super dope!

Yes, it’s true! Now I’m worked on a project of a new reconstruction of a one of most represented landscape and monument of Grand tour: The Salaria’s bridge!.
Stay tuned!

No, I don’t know of John Wick movie! I haven’t even seen the first movie, but now I go to watch the movies and I will wait the second part. Thanks for your appreciation!

Great work!
I remember the ruins from the Forum Romanum. Such a huge building, so impressive!