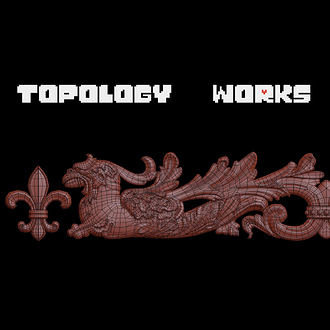 Baroque decor modeling Genocide run.
A short video in Undertale setting with a special ending I made to explore quad topology mesh structural laws and dependencies in order to better understand the matter of topology.
Every frame is modeled in quads, some models were made during animation process. Wow, that’s impressive and an interesting way of animating

I’m heavily impressed by your work. The only thing is, I don’t really want to imagine that animation process…

Well, yes, it was pretty… challenging.

Just see the video in youtube, my respects, thats a lot of work and very elegant results (looking it also from a technical point of view, not only the target design)
Did you have an script to grab an image from time to time or do you manually took screenshots during the process?

Remarkable work! Animations are mesmerizing.
I wonder which tool is tied to your Shift+Q shortcut?

Ya, Mad props to you, your skills are amazing, I could watch the video all day long

This is remarkable work

It actually started as manual screenshots (it can be seen from the first animated model), so most of models were actually made during animation, but in the end I came up with a better solution, such as keeping all frames in a file to make more complex animation transactions.

This is truly stunning! I love it. May I ask, on your more complex models, what’s the vertex count look like?

That’s easy/)
Check it up stats of this free model.
https://www.turbosquid.com/3d-models/free-baroque-mirror-table-3d-model/735933! This is great! Thanks.

Looks great! Your topology is beautiful and your animation is really cool. I’ve never seen anything like it. I love the sound design and how fluid and/or organic everything is. And the Easter eggs in it are perfect.

Wow! Just. Wow! Truly impressive works! How did you even made those animations? Is it just timelapses or did you use some sort of script? I’m amazed at how clean everything is.

I just modeled to quads every frame that cannot be handled with shapekeys.
Thanks)

What is Shift+Q shortcut about?

Shift+Q shortcut is a Spread loop tool from 1D_Scripts addon.
First two minutes of this video demonstrates its functionality.

We are putting a lot of efforts to fix critical bugs and workflow issues in bug tracker before our company can switch to 2.8x. We have achieved very good results, but it is too early.

Why 1D_Scripts is not updated?

1D_Scripts is a set of concepts of tools, which are designed to solve different productions problems.
It is one of several (a public one). Updating also requires time, funds and redesign/testing efforts that we can’t afford at the moment.

I do not do modeling tutorials because of several issues.

I am technical director and workflow designer in architectural company, and quad based organic modeling is a hobby I use to investigate topology structural laws and dependencies, and also to relax after work.

As a workflow designer, I tried to turn the entire process into some kind of 3D sudoku, or pussle game, by adding to default G.E.A.R.S. hotkeys actions simple F2 tool (built-in Blender) and Spread loop operator (from 1D_Scripts, currently is redesigned to view-dependent Splash loop operator in another non-public toolset for testing purposes). That made such animations possible, that can help to move that research further.
There were tread about organic modeling on this site, but, unfortunately, it was lost during BA mirgation.

So, organic modeling I perform have two main goals.

But, since my area of employment is much wider than modeling, I don’t have time for tutorials.
Sorry.

yoo… that gif is mesmerising… could you try doing the same with a subdiv surface modifier applied to it? To redude some of the snapping, im super curious what that’d look like.