LongGrass1920×1080 365 KB
I thought it was about time I posted something of my own to show you what I have been up to!
This is a model of a 7nhp, single cylinder traction engine based on an engine called Saraben built by John Fowler & co in 1929. Only based on, it is an artistic impression-somewhat stylized, I have taken many liberties and greatly simplified the mechanics, I also changed the colour and general proportions a bit so in the end I have given it a new name and number, now «Lord Bertilak». I am not aiming for photo-realism, I prefer a sort of naive reality more like an illustration. I made a basic model about two years ago and this summer decided to work a bit more.

Then I thought «wouldn’t it be great if it all moved?»

Ha, easier said than done, I have had to re-model and re-arrange everything to make it work! Plus learn how to rig (lol).

I had no knowledge of how these engines work and have had to do quite a bit of research.

I am relatively pleased with the result but have reached the fatal stage that to make it better I would probably want to start again and make a more accurate model!

It has been a lot of fun and I have learned a lot on the way, in the end I used many drivers (which is a first for me). And now find them extremely useful.

Here is a video of the mechanics (lazy Screenshots). 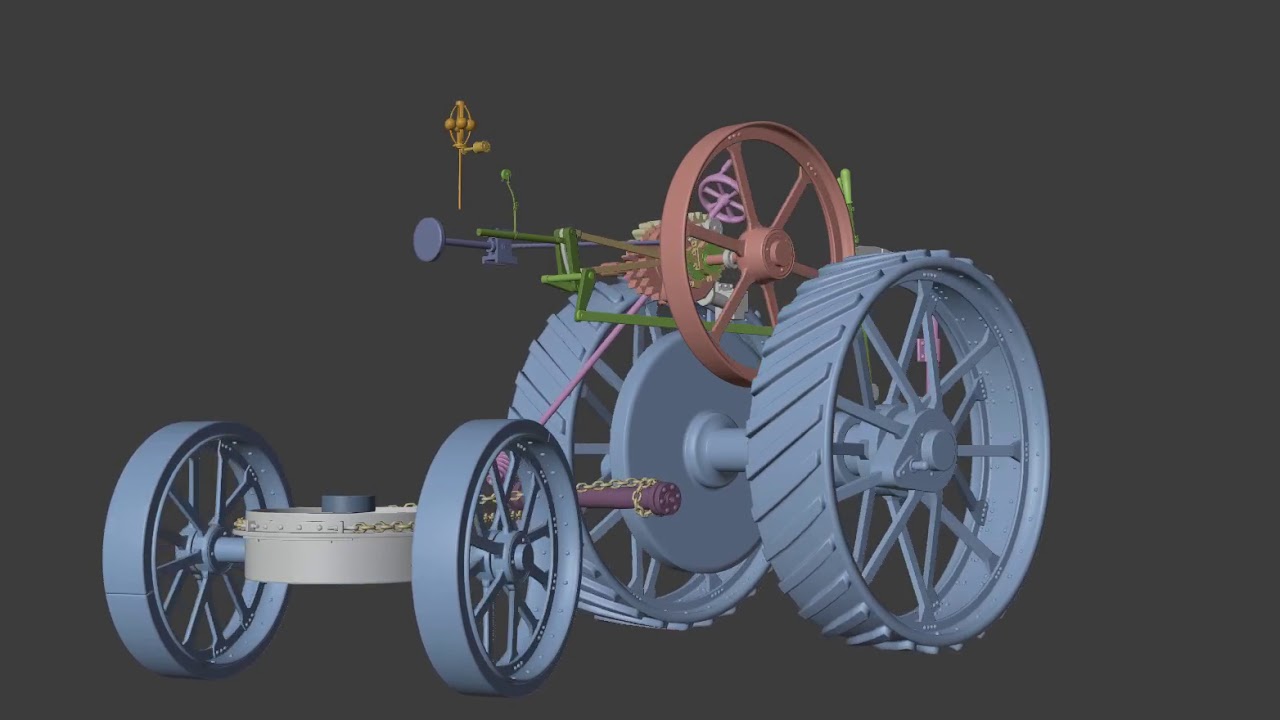 I am particularly fond of the eccentric and the steering system.

The steering wheel turns according to a curve path thus winding the chains around the «winder» and pulls the wheel tub to turn the front wheels.

Well that’s how it works in the real world, in the model it is the wheels turning that control the chains and wind them round the winder via a curve modifier.

It’s funny how animations seem to work the reverse of the real world, the engine has the same reverse logic, instead of the steam pushing the piston and driving the crank shaft, in the model the rotation of the crank shaft drives the main piston!

The model follows a curve and all the mechanics ect will turn and follow accordingly, the wheels turn into the corners ect. I did this with an instance of the model in another scene, the instance follows 2 bones that wiggle around a curve via a drive control object, if I reverse the drive control object’s movement the mechanics also reverse. One bone controls the position of the engine along the path, the other points to the direction of the oncoming bends and controls the steering wheel and the front wheels rotation.

The drive control object only moves on one axis, this was useful as it got rid of an annoying problem in which when the model simply followed the path curve the wheel rotation would stop and then reverse when the model goes over 180º. The movement on the y axis of the drive control object controls the bones, which in turn control the rigs for the wheels, motor and steering system via drivers. The method I used is based on this discussion:

And last but not least the steam! 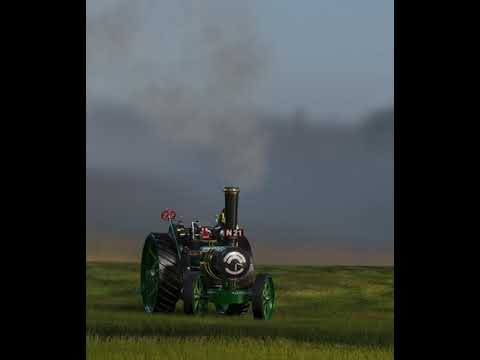 The video is a test, not final and could do with more work… yes, I know there is no real enviroment, the grass sucks, and there is no driver!

So it is a 10ton run-away steam engine – better keep a distance!

I decided to use a particle system for the steam instead of a smoke sim, that way I can go around with the engine and it will leave a trail (or it would if I gave the particles more lifetime!). Also if you reverse the engine, the trail will reverse and do corners etc. If it was smoke I would be limited to a domain, with particles the engine can go for miles and round bends etc leaving the particles behind.

The particles are a cube with a volumetric material. In the end I used two emitters one with more vertical velocity than the other so some smoke goes up and some drags more. I prefer subtle smoke with very few steps, if I crank up the steps the steam gets denser and more detailed but I decided not to. All in all I think the steam works ok, I am not going for photo-realism, and it was «painless» to render in eevee.

The video was done with Eevee because to render the volumetric particles with cycles I would need a farm myself, (or another lifetime).

Man, I love it, the shaders and everything.

Personally, i have never studied it, but the wheels when turning should be turning slower on the inner side of the turn-direction. It’s not a big flaw, as I think that it’s not as easy to do it and question is if the tractors in those times even had the device that corrected the spinning

Very nicely done, and your “deliberate simplifications” are no problem at all. I think you really hit on the color scheme that many of these machines had when they came off the factory floor – in those times, “over-decoration” was very much the order of the day.

Yes, the actual techniques for animating pistons and such are counter-intuitive: the animated rotation of the wheel drives the mechanisms, which “follow” it subject to constraints.

Ha, you caught me!
I know its called differential, I looked this up as I did see that my engine was slipping on corners, I thought “nobody will notice” but obviously if I noticed somebody else would

The first traction engines where one wheel drive, that way the other wheel would rotate freely, but they did not take long to work out a differential gear system as the needed more traction, this sort of engine had a differential gear. (for its date)
I will separate the wheels and use drivers to make it correct as It will be eating my conscience now.
There are some other mechanical details that are not right for the 1920’s as well like the clutch (which is not really visible in the renders I made.) I used a very simple early version, but as I stated I think to make it better I would need to start over!
Thanks for your comment and for looking closely!

Thanks, yes it took me over a week to work out the mechanical rigging (especially the eccentric), I will do more mechanical stuff now I have a starting point!

Nice model. Animation is fantastic, mean I learn some things about this ancient “beast”.

Thanks, this «beast» is one of the smaller traction engines the Plough Engines were twice as big and heavy with twin cylinders!