Texture paint with a Layer Structure. 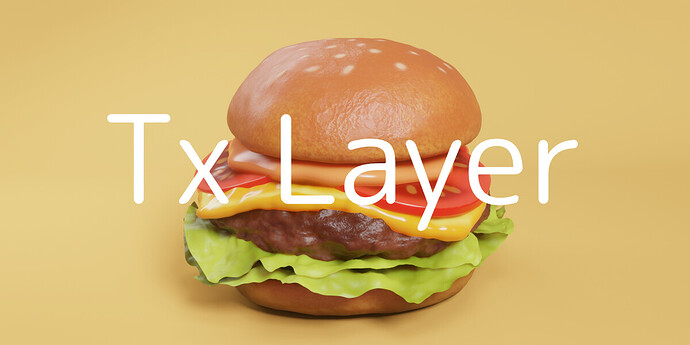 This version has add-ons from other authors that were the original.
It looks like it hasn’t been updated for a while, so I updated it and added some features.

A free version is also available.
Proceeds will help in the development of this derivative version. Texture painting with LayersYou can perform basic layer operations such as adding / deleting / sorting / opacity / blend mode / display switching.It seems that it hasn't been updated for a while, so I updated it and added features.This add-on also... 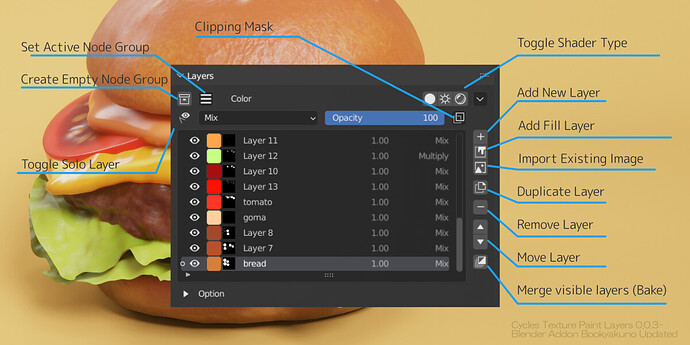 When you create a layer, a group of nodes for the layer will be built in the shader node.
The node structure is automatically adjusted each time it is added or reordered from the add-on menu. 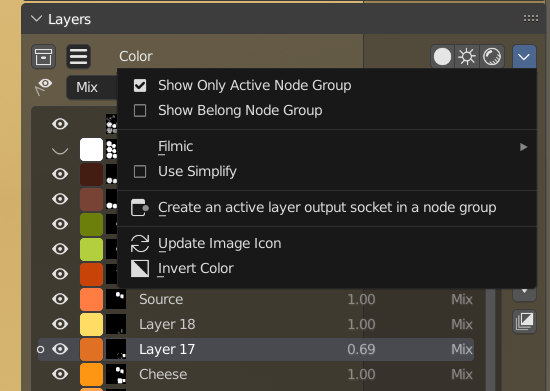 The original author’s distribution link and older versions can be found in the zip file in this thread.

[Blender-Layer-Demo] This free add-on allows you to quickly create and manipulate layers in Blender’s texture paint mode. You can texture paint entirely in the 3D View with the full functionality of layers, while nodes are being generated behind the scenes, and you don’t have to go through the boilerplate of arranging and rearranging nodes to paint on different textures. Tested in Blender Cycles 2.79 Download the latest version on github: 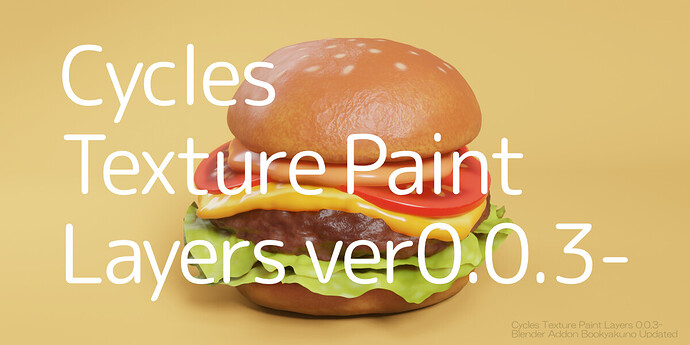 Because many features have been implemented and are far from the features of the original add-on.
The other reason is that the name is long and the name “Cycles” is now less relevant with the advent of Blender 2.8’s Eevee. 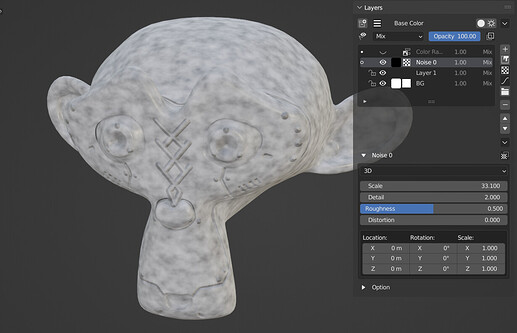 Added a procedural texture layer.
It is convenient to use with clipping mask and color Adjustment.

As with the fill layer, you can adjust the color from the list item left color icon.

(Because it is a texture node, it needs to be imaged with [Combine (bake) display layers] so that it can be edited directly.) 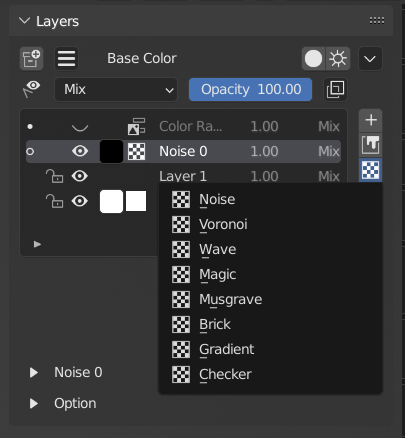 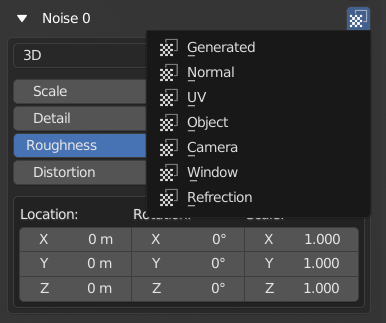 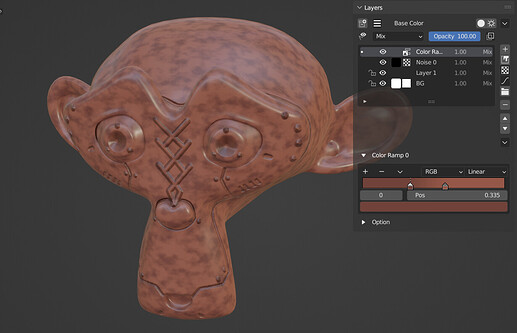 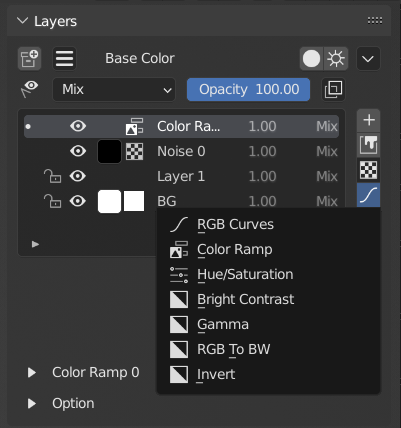 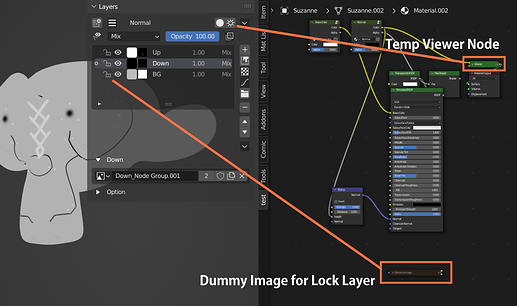 The diffuse / radiant shader switching function has been redesigned to temporarily create a viewer node without changing the main shader node.
Enabled to check the active node group individually.

To restore the viewer node, click the same button again.

Use this to make the diffuse BSDF as before.

Added an option to protect layers from texture paint.

Editing is not locked in Blender’s Texture Paint, so I’m using a pseudo method.

Make a dummy image (small 4x4) at the time of selection and select it for the active paint slot each time to avoid selecting the original image.

If you actively select a procedural texture, it will be processed in the same way.

When creating a node group, a background layer and a normal layer are created in the node group.

Improved to be able to select the connection destination socket

When creating a new node group, you can now select the socket to connect to the Principle BSDF.
You can select base color, metallic, roughness, normal, alpha, etc.

Fixed an issue where when selecting a layer in a node group, undoing would cause the texture slot selection to revert to another texture.
(Every time you select a layer, make the node group in the material’s node tree the active selection)

If the destination socket is Alpha, set the material setting to alpha blend to disable the backside display. 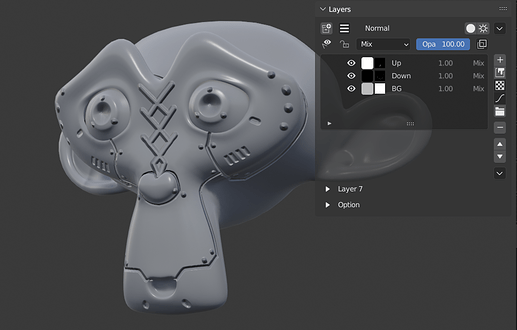 If the connection destination socket is [Normal], a bump map will be created and connected, and three layers will be automatically created so that you can write immediately.

Writing to Up makes it exciting, and writing to Down makes it a groove. 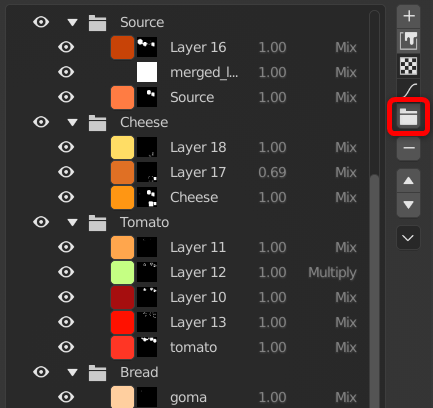 Added the ability to sort by folders and organize layers.
By switching the eye icon, the display of items under the folder can be switched at once.

You cannot move layers in a folder at once, blend mode, or adjust opacity. 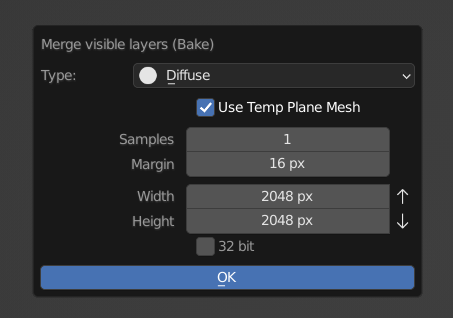 Added the Use Temporary Plane Mesh option.
Bake all areas of the material by baking with a temporary flat mesh.

Bake with a simple mesh, so the bake time will be a little faster.
You can avoid the problem that normal baking only bakes the area of ​​the selected object. 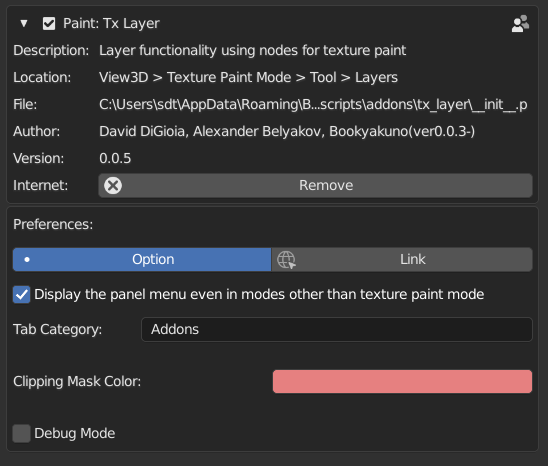 Thank you for using it.
Probably the error that occurs when opening the layer made with the old version ver0.0.5. 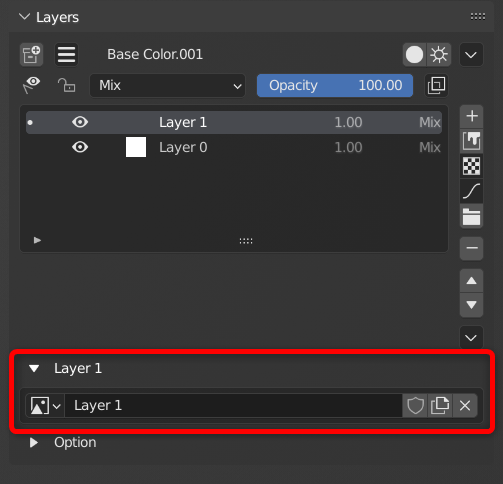 I don’t know the exact cause, but recreating a new layer is a surefire way.
Recreate from a new material, recreate the layer, and replace the image with the image used in the old layer.
When reporting an error, it is easier to resolve it by posting the full text of the error. 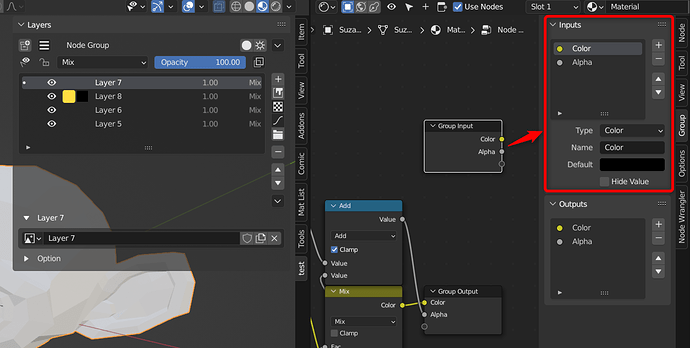 Could you add a blend mode specifically tailored for mixing two (or more) separated normal maps? The video is an example, in the comments section there’s a second link for a more precise method (which use Photoshop but it should be replicable within Blender just fine)

Thanks for the addon I’ll donate before downloading it

This article is a commentary on how to synthesize a normal map that I created earlier (please translate automatically).
It can be reproduced by multiplication and division with (0.5,0.5,1.0) colors.
(This add-on alone cannot set the image color type to Non Color, so you have to set it manually) 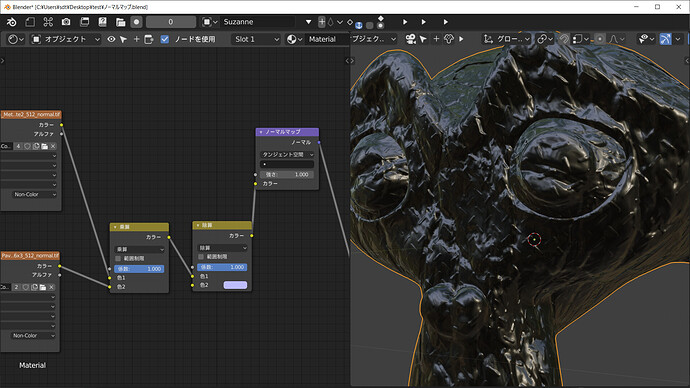 @Bookyakuno I really love this addon as it gives you an easy workflow towards layered texture painting. However, I’m experiencing this weird error whenever I try to create a new node group.

I really don’t know what to do every time this happens.

Thank you for reporting the bug.

I don’t know your details, but the error occurs when Texture Slots > Mode is “Single Image”.
Change the texture slot mode to “Material”. 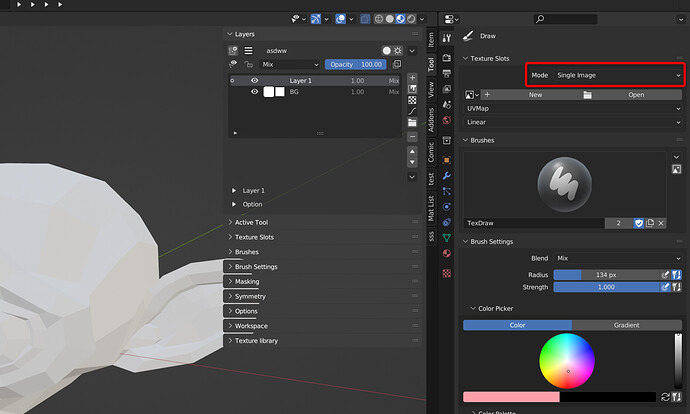 YES! Thank you so much! It worked. Hoping to see some updates in the future with your amazing addon.

Hey @Bookyakuno
Just started to use your addon, and its simply amazing!!
Some feature still not pretty obvious, but anyway it’s super handy!
Is it possible to implement two features? 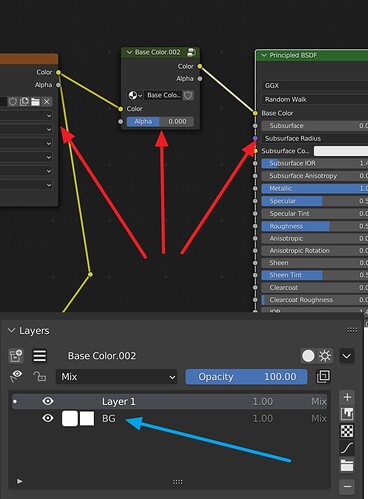 Thank you for using this. 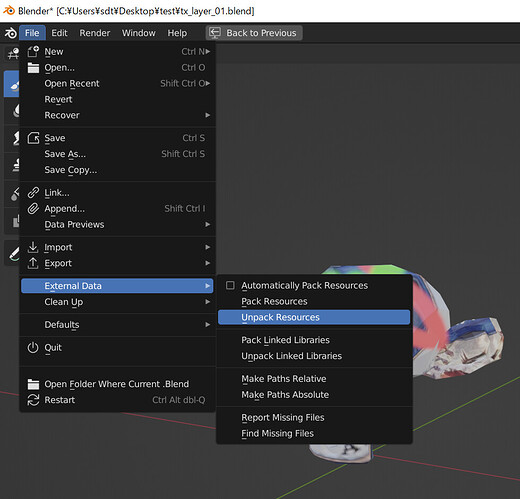 To save the image, press Alt + S frequently with Texture Paint.
Image files are saved (packed) in blend files.

If you want to save the image files as external data in a batch, it seems that you can save them in a batch externally with the following function. 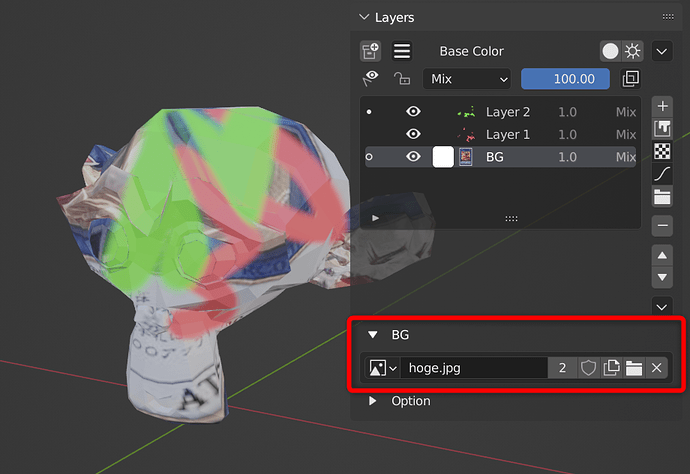 I don’t implement this because I don’t feel it is very necessary.
Basically, texture processing is supposed to be done in the layer.
Add an existing image inside the layer or manually socket it to a node group to hide the BG layer.

Thank you for respond and for your help)
According to case two there is some arguments)). It’s perfectly works for one single texture (Probably already baked)
But some materials are not made from scratch, and diffuse not always an image, some of them are library materials with procedural tiling, color correction etc. So in most cases all needed just add some cool hand painted effects, so I am pretty sure that will be very useful)) For sure it’s not a big deal to rebuild this manually, but repeating of this just a bit annoying))