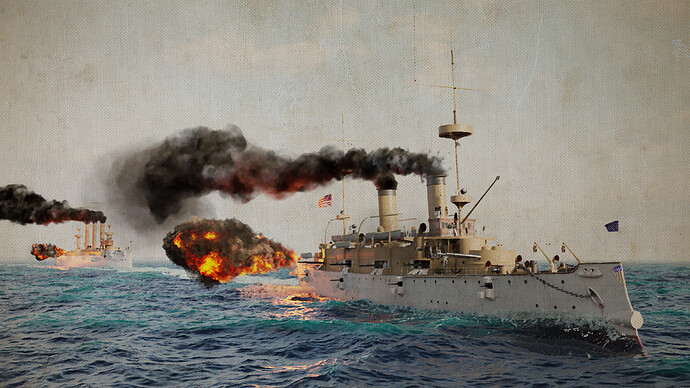 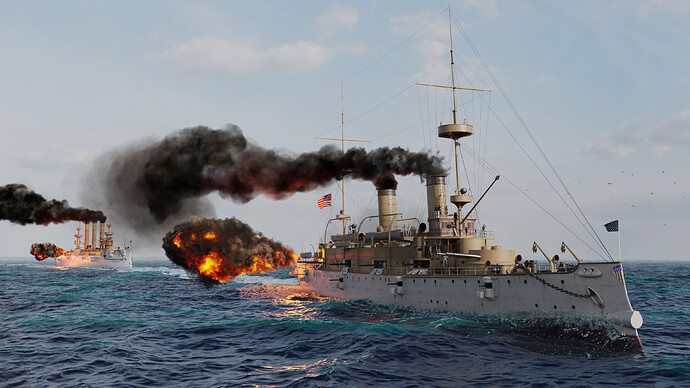 Really nicely done! I find Pre-WW1 area warships to have an amazing aesthetic of their own.

How did you do the bow wave? I put together a German armored cruiser once and found a convincing sea with foam to be one of the most challenging aspects.

I remember liking your cruiser. Ships from that period definitely had unique shapes and features.

I created a video describing how I made the bow wave, spray and wake. It’s probably more useful than me trying to write an explanation.

This is gorgeous!! Can we see more views of the ship from different angles? I was thinking of doing the Olympia as well, even build the plastic kit of it.

Thank you. I’ll do some more renders and post them.

Thank you. There are lots of good on-line references for this ship since it still exists at a museum in Philadelphia. You should be able to build a good model of it.

More renders of the Olympia… 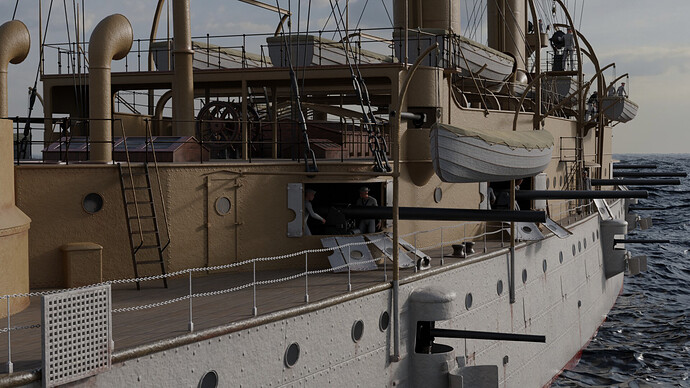 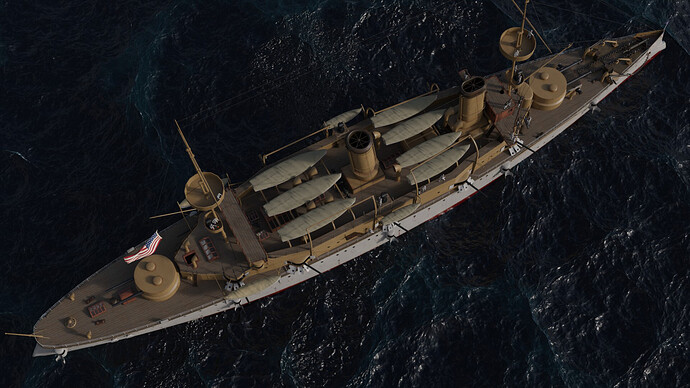 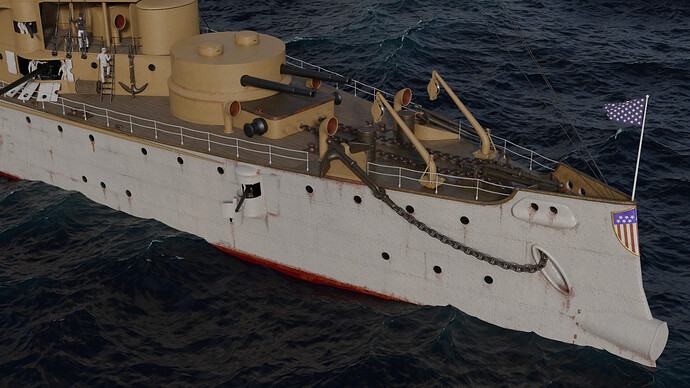 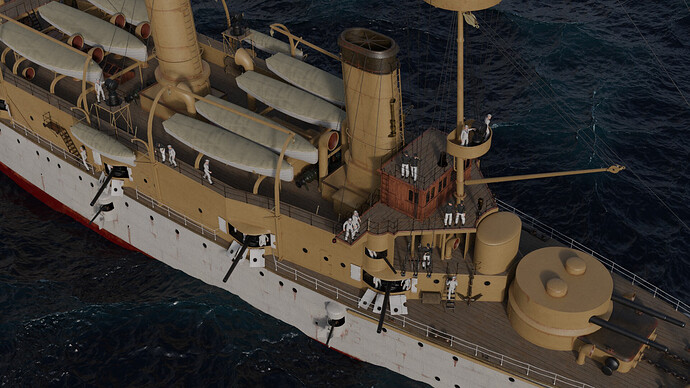 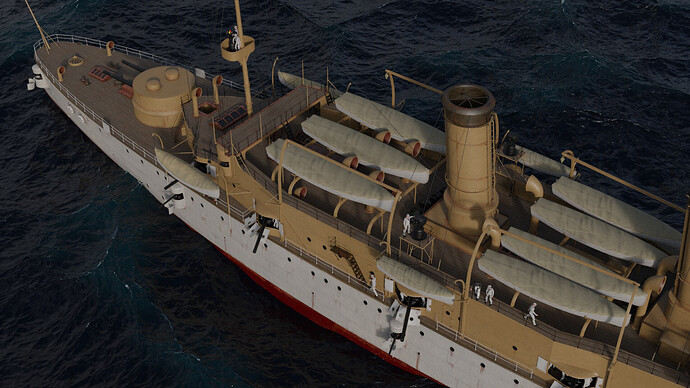 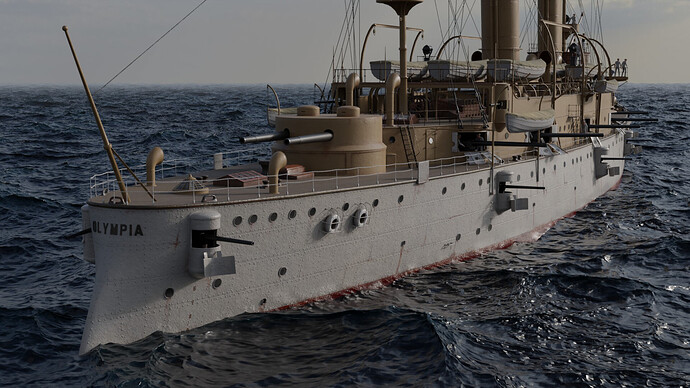 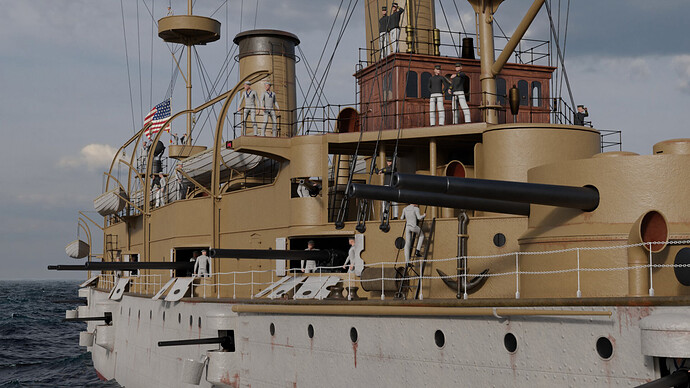 And some extra renders of the Brooklyn (the Brooklyn was only supposed to be a background object, so the detailing and texturing is not as developed as on the Olympia.) 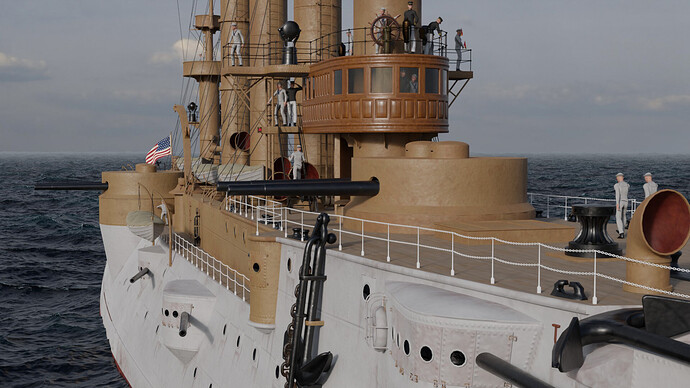 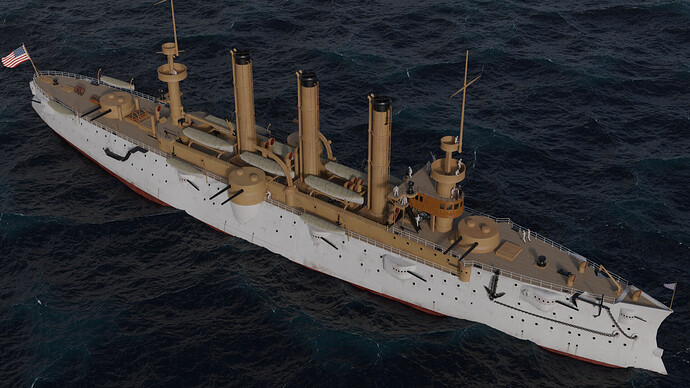 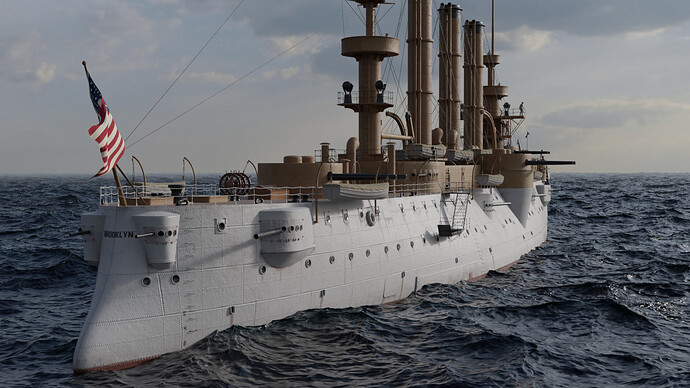 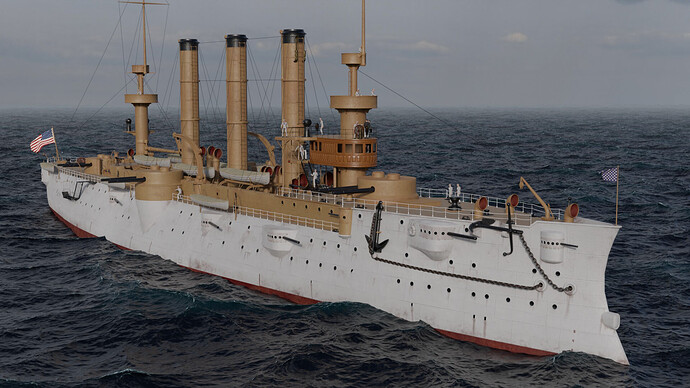 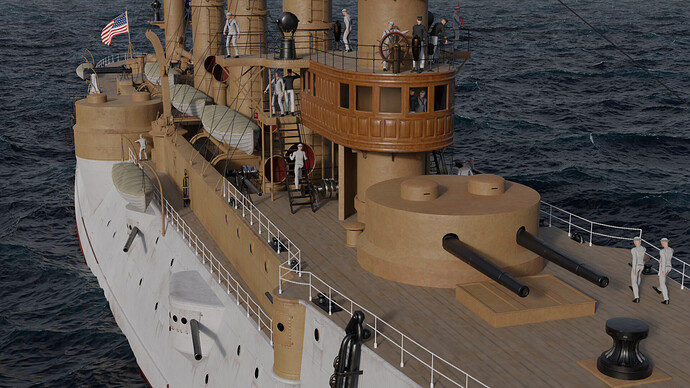 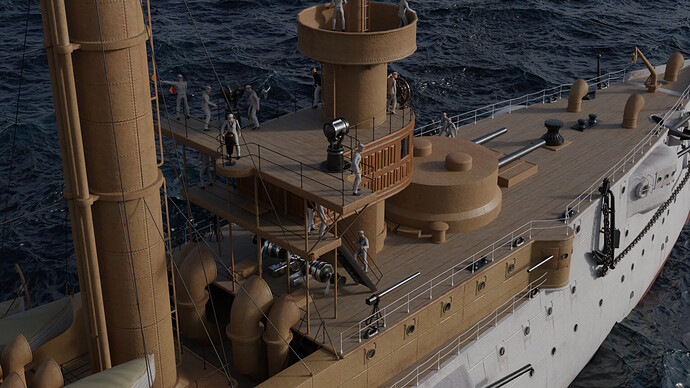 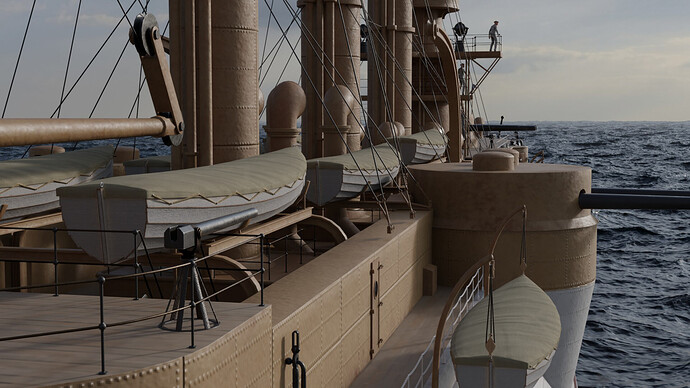 The model looks fantastic! I’m using a 32" monitor and blown up to full size it’s like being there! Well done! I hope you don’t mind me asking but two things, how are you doing the rivets? And the rust on the sides of the ship, did you paint them on? Or better put, how did you do them?

Both the rivets and rust were done in Substance Painter. The rivets were drawn as bump map (height) data using a soft/round brush with spacing turned up so when I drew lines, it drew a series of dots instead of a solid line.

The rust was created by making the base layer of the ship a rusty texture. I then created a “paint” layer on top of the rust and put a white mask on the paint layer. Then I used dirty brushes to unmask rusty areas. I also used some of Substance Painters generators to add rust to edges and creases.

So you kind of hand painted every rivet? That’s dedication!

@DrFaust - the rivets aren’t hard. Just click to set the first rivet, hold shift and put the mouse at the end of the row of rivets, click again, and they all get drawn in a straight line. It goes pretty quickly.

Any moddeling tips for the nieuport 27. Im no expert at moddeling i mostly sculpt in zbrush any tips to get started looks fun i have some exsperince with textiring and other 3d things i tried moddeling the nieuport allready but never got the result i was going for ive been using blender for 2 years now on and off

WWI aircraft are good starting projects because they are pretty simple and don’t have complex curves. I think the best thing to start with are good plans and lots of reference materials. Try to find plans that include airfoil cross sections. That will make the wings much easier to make.

I’ve done a couple WWI aircraft. If you’re interested you can check out the WIP threads.

I also have a couple of YouTube tutorials that might be helpful. (There are obviously lots of great tutorials by other people too, so definitely take time searching for them.)

Another idea is to download a model somebody else made and study how they made it. Blend Swap has some decent WWI aircraft. You could download some of them to see how they were made.

Thanks alot ill try all of these ideas, thanks mann (

I’d love to see a cannonball coming just out of the smoke and fire, to give it a little bonus movement. Really nice work.

That would have been a good idea. Wish I had thought of it.

That’s something you could even photoshop in if you wanted but there’s always a next time… Anyway, it’s just my creative director mind at work – I always think of extra things and details like this. It’s just the way I’m wired I guess.

Sometimes I spend too much time looking at other people’s work (though I enjoy it) but need to try to stay focused on my own. Still learning Blender though…