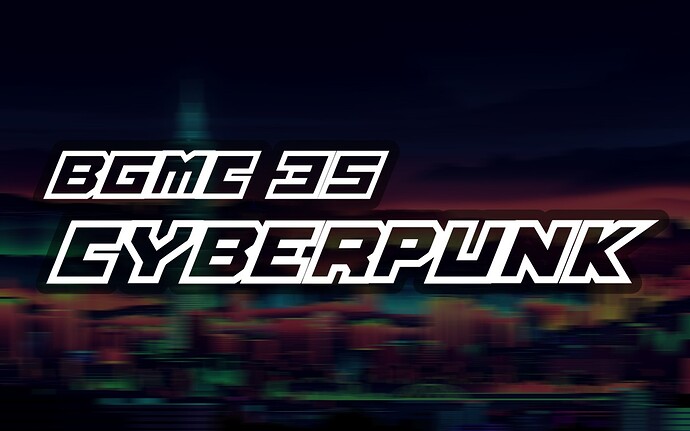 Hey! Following the result of the theme voting topic and a final decision made by me due to a triple tie, the BGMC 35 theme will be Cyberpunk! Use your creativity and bring the best this theme can provide.

Loved it! Looking forward for the entries as well!

I had a fun idea for the competition, but this week is the first week of the semester and I am really lost with what all is going on, so I probably won’t be able to participate, or if I do it won’t be until this weekend.

Hey, whats up everybody?
Just reminding that BGMC 35 ends today! I’ll gather the games to make a pack tomorrow, so games sent after the deadline will also be included (since not many were submitted this time, anyway).

I was so looking forward to this one, I just didn’t figure it would start so fast. Good luck to everyone and I hope your games turn out well!

Oh dang! I just found out BGMC about this today! How did I miss this…

I played the two entries, this is some cool stuff!
I’ll be there next time

The Final Vote topic was created, go there and vote for the winner of this BGMC edition!

I must figure out how to keep up with this.

You can watch the tag ‘BGMC’ here (maybe not that helpful if you don’t enter the forum often or the hosts and participants don’t mark their topics with this tag, but it’s a valid tip anyways). 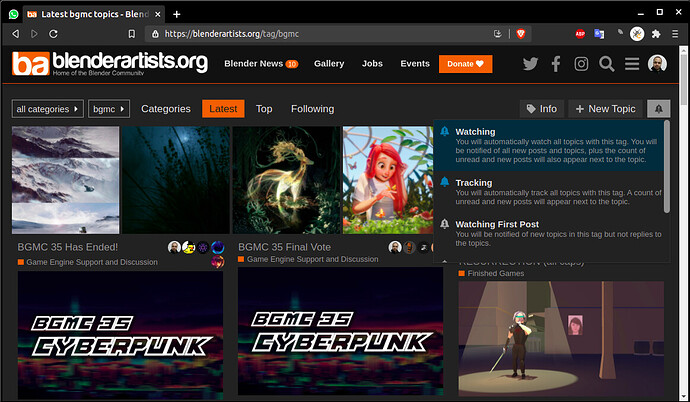 Or you can participate some Discord servers such as UPBGE and BGMC, I did announced the updates there and maybe the next hosts should do it as well.

Dude. Just lurk.
Also here, put this on a sticky:

I’ll plan to begin the next one around end of July/start of August.

Sidenote, I want to make (fully GPL) asset packs for the next one so if anyone’s interested in making contributions to that effort then ping me or whatever. I haven’t thought out the details yet, like where to host it and such, but a top priority is for assets to be as lightweight as possible in order to comply with the ~40MB size thing. So anyone good at keeping polycounts low and textures small is welcome aboard.

also a site we can donate to fill a pot would be cool for 1st / 2nd / 3rd place
this could get more entries. (I would donate every month if I could)

this where discord can come in handy, we make a bgmc news channel and people can opt-in to get pings from there. have a @bgmc role you can use.

I actually knew the competition was going,
but my daughter was sick that week + a had to teach + some freelance work

I think that having more people able to register in advance, and get notified when the comp starts will boost attendance though for sure.

Perhaps I should set up a BGMC36 participants thread now, so people can leave a comment to say that they would like to participate next time. That would provide me with a list of people for me to @ mention whenever there’s an update leading up to the start of the BGMC. Maybe that would keep those interested in participating up to date?

That sounds like a good idea. This time I was just too busy (first week of the semester) but I would love to participate next time (If it were late July I probably would be able to participate)