man you did a very good work on the design, i never thought thy were that big, ?
have you ben into one before or something ?
because it really looks detailed

start adding some material cycles
should look even better

there was also the type 9 and 21 I think
are you planning to do these too ?

I’ve never been in a Type VII before. As far as ships go, U-boats weren’t that big and living conditions were quite crowded and difficult (heat, noise, humidity, close quarters, limited sanitation…)

This is only the start of the project. I’m just roughing in where the big pieces of equipment go.

Updates to the stern torpedo/electrical room. 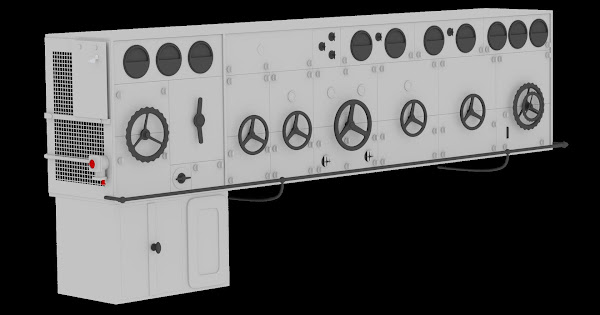 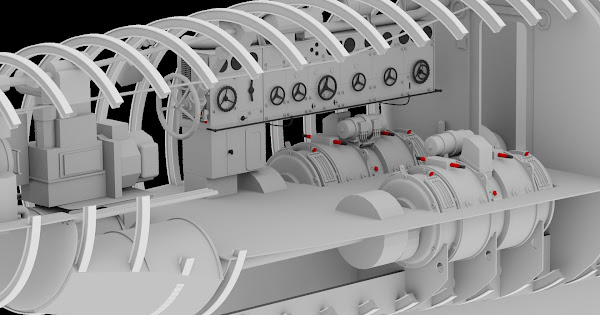 Updates to the stern compartment… 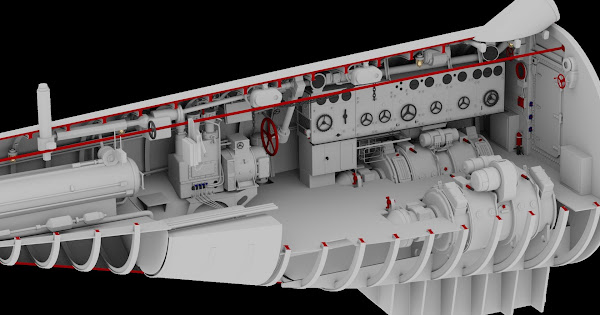 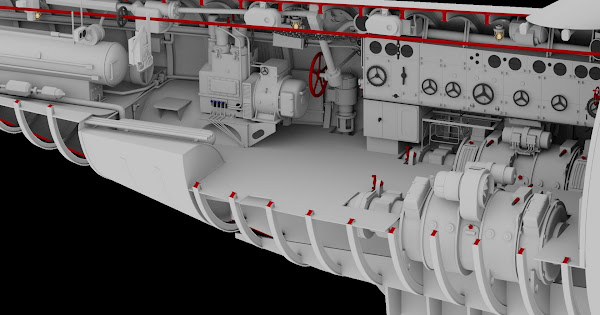 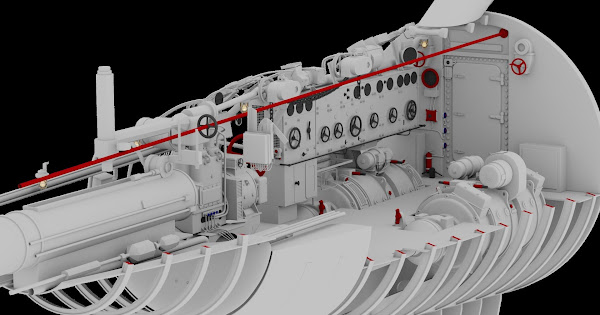 can you describe the different parts

do I see 2 elec generators ?
what power are they ?
are these diesel gen ?

sorry I could ask 1000 questions on elec things LOL

what is the big cylinder in the back end ?

where did you get all these details ?

Thank you for your interest in my project. Most of my research comes from books I own and Internet searches. Photos of the U-995 (which is on display at the Laboe Naval Memorial near Kiel Germany) have been particularly useful for interior details. 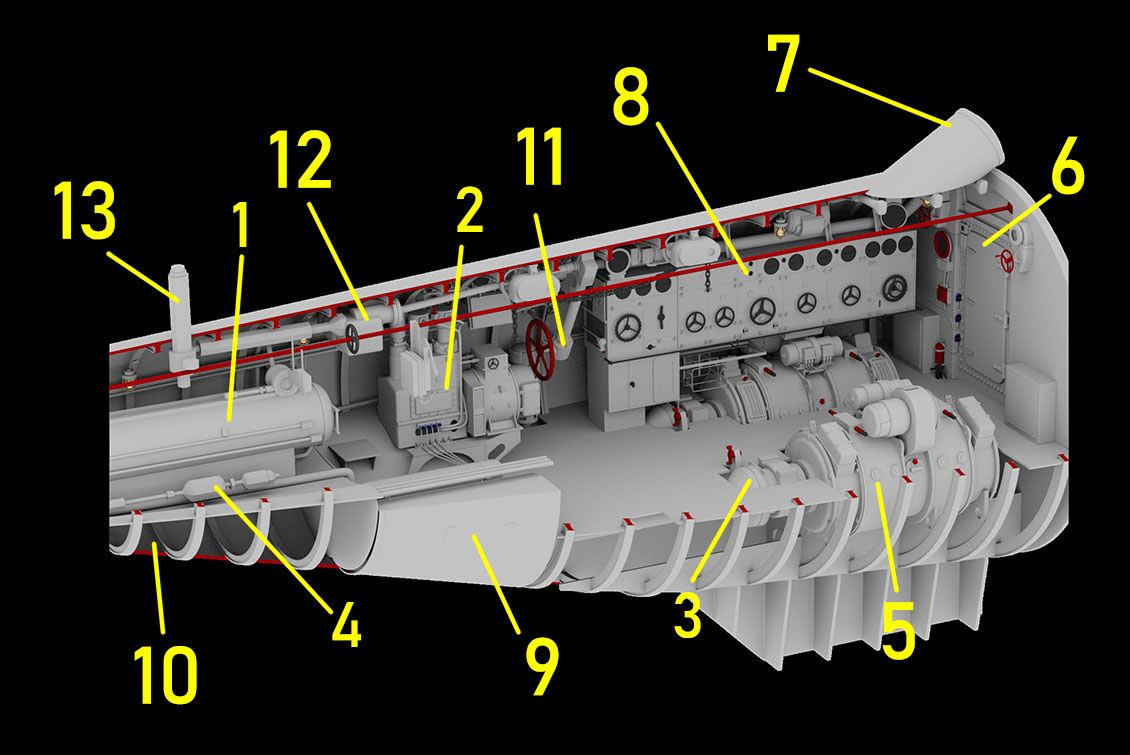 do you have the size of these elec motors ?

I was not able to find such data on the internet

I would suggest start to add materials now
or it will be a nightmare later on to add 1000 mat !

found this on wiki

have to check wiki again
got the wrong sub

don’t know what the shaft diam were ?

these motors were double acting
do you have any details how these work ?

I mean each motor was able to drive the 2 shafts ?
not certain how the gear box work for that !

how come we don’t see any elec generator
I mean the diesel would be there to feed a generator as I know of !

I don’t have the exact size for the electric motors. I know that there were several manufacturers/models used on the Type VIIC boats: AEG GU 460/8-276, BBC (Brown Boveri & Co) GG UB 720/8, GL (Garbe Lahmeyer) RP 137/c, and SSW (Siemens-Schuckert-Werke) GU 343/38-8. All varients produced a combined 750 shp with a maximum submerged speed of 7.6 knots. The only photos I’ve been able to find of them are on the U-995, so I’m only able to accurately model the parts of the motors that are visible on the U-995.

I’ll wait until the compartment is completely modeled before I unwrap UVs and texture. My plan is to texture each compartment as I go along. There’s really a lot fewer parts than it looks. Many of the details are group instances, mirrored objects or the result of array modifiers. Pipes and wires are curves with Bevel and Resolution turned on. I’m also not planning on doing super realistic materials on many of the pieces. (I’ll use procedural textures on as much as I can.) I’m hoping this will suffice for things like pipes, fittings and other small items.

I do not know the exact diameters of the propeller shafts. I just modeled them based on profile drawings I have.

I believe each motor was only responsible for one propeller. I’m not aware of a common gear box or differential that would split power across both propellers. The drawings I have only indicate reduction gearing and clutches for each engine/motor combination.

The diesel engines are in the compartment in front of the one I’m currently modeling. They are much more powerful than the electric motors, but they require air for combustion, so they could only be used while the boat was surfaced. While running on the surface, the diesels would also recharge batteries that are stored in the lower sections of the boat. These batteries would be used to power the electric motors while the boat was submerged.

i never thought thy were that big

I can assure you they aren’t. A few kilometers from where I live U-995, a real Type VII C U-Boat built in 1943, is propped at the beach and can be visited from the inside.

I normally don’t tend to be claustrophobic, but in there I (6 feet and 4 inches tall) really need to pull myself together. And that’s despite knowing that there is a door sized opening in the pressure hull front and back. I don’t want to imagine what it must have been without that and with 100 meters of water above you. Not to mention the 40 to 50 other people you had to share the space with.

oh really? thats weird , i think the imgs makes it looks so big

Yeah, but take away the pressure hull, the engine and battery compartments, air and diesel tanks and torpedo storage and you’re left with a “living area” a man can hardly stand upright in, corridors just wide enough for one man to pass and bulkheads every few meters you have to crouch through. Not fun.

Don’t forget to add in: near 100% humidity, rotting food, only one shower a month, air that tastes like diesel fuel, two toilets (only one could be used for beginning of voyage because the other was used as a pantry when the ship left dock; neither could be used when the ship was deep because there wasn’t enough pressure to eject waste material), engine room temperatures around 40C, mold, engine noise - deafening, etc…

hope you can show the diesels with the generators

but on wiki they are saying that these were double acting
not certain why we don’t see this !

any idea at what voltage these motor were working ?

Indeed. And it still, after all those years, smells like diesel fuel and torpedo grease in there.