The rabbit and the forest troll 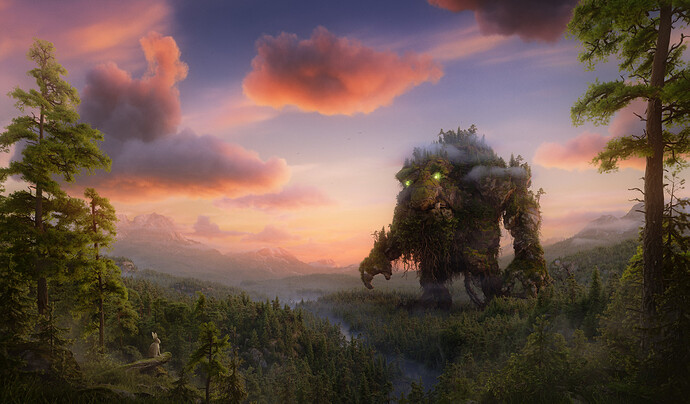 I just love the forest, and being a swede living in Norway I am also obligated to believe in trolls. Not that I will ever see them because they’re probably extremely picky for who they show themselves to. This time it and the bunny had a small moment together just before bedtime. 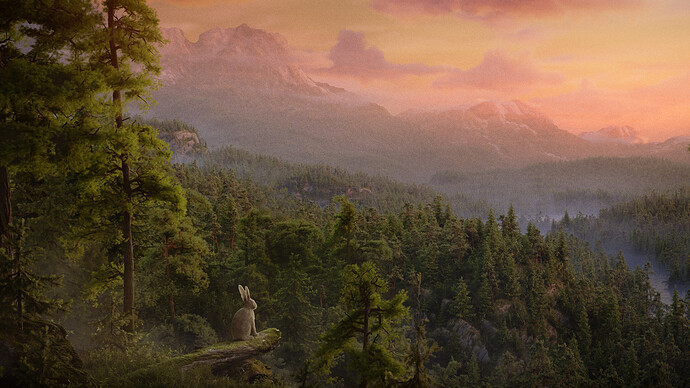 I have been working on this back and forth for a way to long time, being to obsessive about big and small stuff which have made me quite blind to this. As a true artist I will abandon this now, but might go back in a month or so to look over the grade again with new eyes

Everything apart from the pine bark and stone textures is made by me in Blender. So I’ve modelled all the trees etc myself, the spruces and pines in the distance I made about a year ago and unfortunately uses opacity maps which slows down the render time quite a bit, but the closer pines are newly created using geo nodes, so every single needle is a geometry (which yeah actually renders way faster than low poly with opacity maps). 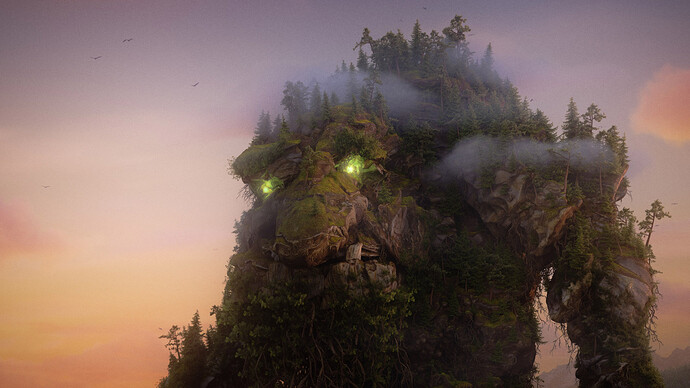 foresttroll_wip30_final_crop11920×1080 293 KB
And just as an fyi, the spruces in the foreground is the exact same model as the spruces on the furthest mountain. There are around 500 000 instances in the scene with up to 80k polygons on each which totals in maybe around 130 000 000 000 polygons in the scene. In other words, Cycles can handle polygons quite easily

Wow! This is honestly beautiful and inspiring!

Impressive! Looks like an insanely detailed oil painting. How can you even edit / preview such a massive scene when you’re working on it?

OMG what a beautiful job

Thanks guys!
Well I work on each part separately and when I’m done you set the viewport display of those trees to “bounding box” which makes the viewport way faster. But yeah still kinda slows down quite alot after a while anyway. I generally very much dislike this separation of viewport and render toggle that are everywhere in Blender, but here it would be nice if geo nodes could somehow show less of those instances for just the viewport. But anyways, if you enable rendered preview in Blender it’s quite responsive, especially if you’re using Cycles X

Looking nice! Can we have viewport solid view?

Wow. what an amazing project. occasionally something like this seemingly pops out of nowhere (but of course it didn’t just “pop out” for you) stellar work

PS I like how “rabbit” comes first in the title

I like the idea a lot. Only being a Ukrainian-born Australian, I live in our Tropical North and am surrounded by beautiful tropical rainforest, which makes me wonder: why are the 3D-artists such a temperate bunch? I’v seen a number of amazing works featuring the forest; I don’r remember a single one featuring the jungle. There are spirits here, too—almost like in the Avatar movie.

On the technical side, the bunny may be a bit too big, compared to the surrounding trees: maybe a different angle would’ve helped to work around the difficulty of showing both characters clearly?

@Boder Thanks! Yeah I did actually write the forest troll first but changed it since I thought the smaller guy should come first ^^

Sure you can have both a solid and a wireframe. The wireframe is quite messy thou, but I guess you get the idea. I did have the foreground and the landscape in different render layers, but combined them here just for you to see. To get a preview of the other layers I just added a plane with an exr render on it, so there you can see the clouds rendered 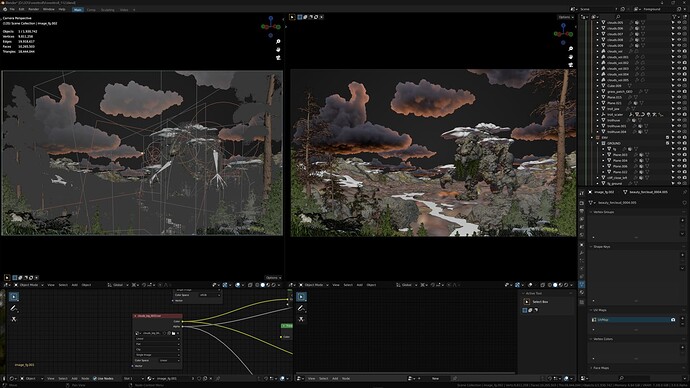 Yeah, good question! There are quite many indian 3d artists but we rarely see jungles from them unfortunately. Pesonally I’m not nearly as familiar with those spirits as with the northen ones so that’s why I do temperate forests. But I do know about the maninkari from the Amazonas which I would interpret quite closely as the spirits in Princes Mononoke. So since you mention this I might do something with those in a jungle sometime

About the rabbit size; yeah I thought about that and did actually shrink him a bit already and didn’t want to remake that hole thing to the left and thought I would get away with that, but guess I was wrong

Wow this is amazing… really nice

This is gold. Here there is only to bow in front of so much skill, expecially since you modeled all by yourself. Awesome work

Wow, this is great! I also love the clouds. They give a really warm feeling to the image.

Haha, yeah thanks a lot for your nice comments ^^

Astonishing! I have seen a hell of a lot of great artwork here over the last couple years, but I can’t think of any one of them that rises above this one… Truly a breathtaking masterpiece! Bravo Tell! Make more art please!