I’m finding some videos/.gifs are no longer displaying in several older posts. A couple of examples of missing .gifs are the first one in this post:

and the one near the bottom of this post:

You can still open the images by clicking on the link that’s replaced them, but they were originally embedded in the posts.

There are also some embedded Twitter videos that can no longer be played, even though they’re still on Twitter. Examples:

Along with making lots of rigging, weighting, topology and model improvements and adding corrective shapes, I’ve now given the female shape key a body. The rig adapts to the proportional differences via an action that’s driven by the same control that drives the shape key, which should make it possible to accommodate a variety of body shapes. Oh yeah and I made a walk cycle.

The infamous shoulder region. Not perfect, but the arms can reach a fully raised position without the armpits inflating and shoulders imploding now. I couldn’t find much in the way of tried and tested techniques for shoulders, so I had to improvise. Weight painting and corrective bones alone weren’t cutting it, so I gave in and slapped on some corrective shape keys driven by the upper arm rotations. Now the bones, corrective bones, corrective shapes and two body shapes (male and female) were…

I’ve noticed .gif thumbnails no longer animate on the Work In Progress page either, which may or may not be related.

Both the gifs in the topics that you mention work fine for me, suggesting perhaps an issue on your end?

I’m not sure what would have caused the embedded tweets to stop working, but when I rebuilt the posts they showed up again

Hi Bart, thanks for looking into it.

Can you see the teeth in the first example? I get this instead, which can be clicked on to show the .gif in a popup:

And there are three .gifs in the second example, but the third one is replaced with a similar link. I’ve tried Edge, Chrome and Firefox, all with the same results. Strangely they display normally in the preview window if I attempt to edit the posts though.

Those Twitter videos seem to be showing up here now as well, however I found another one in that thread with the same issue:

I don’t know if there are more of them (it’s a big thread). Could it be a problem across the board?

There are only working when i click on it and they dont show up automatically like the others.

I’m here to echo @ChrisJones and @3DArtGuy. I’m seeing the same thing…a broken link that works when clicked. Regarding the videos, clicking on them gives the dread No video with supported format and MIME type found.

Yup, seeing the same issue with gifs as ChrisJones, schamph and gtomorrow with (on Linux):

However, the Twitter video issue in this post mentioned above by Chris for me only occurs in Firefox, Chromium seems to display it fine.

The gif of the teeth shows fine in both Firefox and Chrome though: 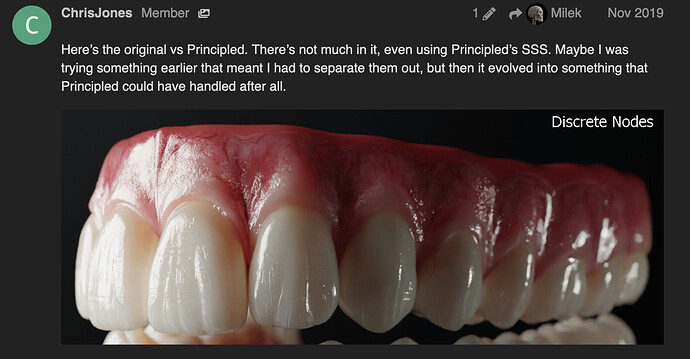 I’m curious what the image source of the broken image is - what do you see when you right-click it and select something like ‘copy image location’?

However, the Twitter video issue in this post mentioned above by Chris for me only occurs in Firefox, Chromium seems to display it fine.

I can see that one in Chrome, but not Firefox or Edge (which is supposedly based on Chromium).

I uninstalled Chrome and installed a fresh one, still can’t see it in that or Firefox 85.0.2. Could it be an OS thing?

I’m curious what the image source of the broken image is - what do you see when you right-click it and select something like ‘copy image location’?

What happens if you open that image link in another browser or in a private browser window? I double checked the URL and it works fine for me :-/

Yeah the image shows if you open the direct link to it, it just doesn’t show embedded in the post.