Duck Avenger driving in the night 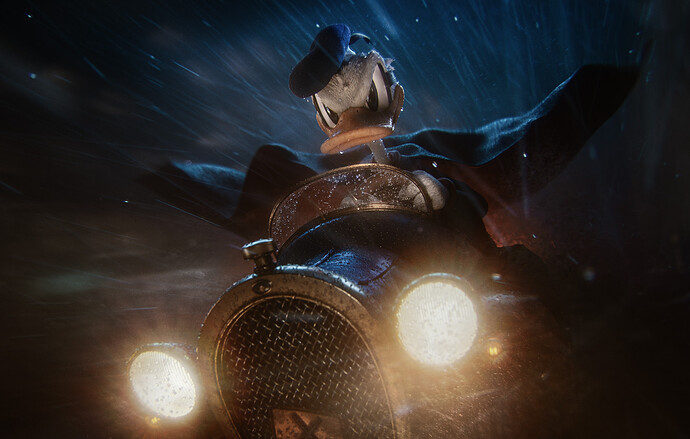 duckavanger_final_forba1920×1224 425 KB
It’s night and it’s raining, so a perfect time for the Duck Avenger to go for a drive in his car to find some criminals to lock up! Vrooom vroom! 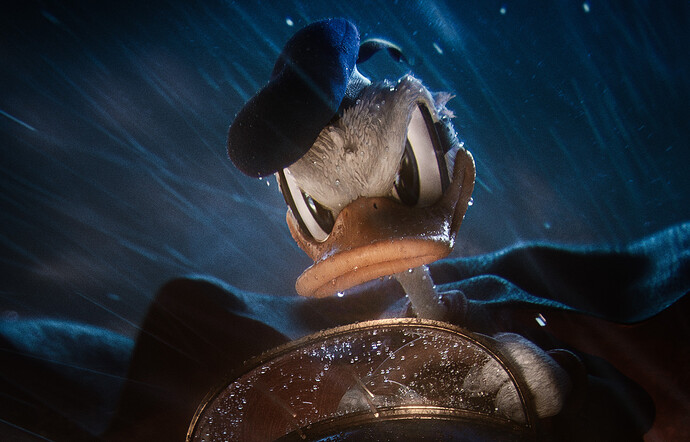 Some of you might remember the Donald Duck in his 313 that I posted about half a year ago (which I now feel I should do a new grade for…). When I made that I also had an idea to make a Duck Avenger version of it but I never did. But now I wanted to do something that I could print and give to my brother this christmas and thought that he would like to have a Duck Avenger on his wall ^^
So I took my old scene, made a new camera, put some volumetrics, new lights and was almost there. Of course some rain would be cool, so added some emitted moving particles with a simple icosphere attached to them with a glass shader on that turned out really good with motion blur enabled! I also modelled a cape for him, added some details to his suit and a mask on his face. Topped it all off with lots of rain drops on everything, quite fast and easy job with the new fields geo nodes.
Rendered with the new Cycles X, took around four hours at 4K 1600 samples which is quite fast considering I have volumes, depth of field AND motion blur enabled. Kinda living the dream here with a 3060ti and Cycles X, doing stuff that I couldn’t have dreamt about only a year ago when I only had my laptops CPU

Comp and grade in Photoshop.

So all in all a pretty fast project. Well of course unless you count aaall the hours that I spent like a year ago on building the car, shading the car, modelling Donald, creating the fur/feathers etc etc

Also made a fast film noire grade, just for fun. Does it work? Quack indeed! Thank you guys and thank you Bart ^^

Paperinik is my childhood, I didn’t expect to see him again, and in such good shape! You really captured his spirit, it’s great!

Amazing work, love the look of the wet feathers and the lighting is great!

Thank you for your nice comments! Was a really fun project, doing a bit darker rhings is nice for a change ^^

Great job on that wet overall feeling! loved the 313 scene but i think though they are very different i like this one even better, i love how on the past scene the showcase of materials and modeling was spot on but on this darker scene i think though materials look amazing, specially the hat (i really like how the fabric looks) i think what makes this one so interesting to me is the composition. Fantastic work! thanks for sharing.