Please read the Caveats and Limitations section before buying.

Provided under GNU General Public LicenseWorks for Blender 2.81+For more info, check out https://blenderartists.org/t/addon-editable-motion-trails-3d/1197906Update: 10/07/20: Optimization optimization: There's not much to specifically say without...

Hello everyone. For the past year, I’ve been working on making a 3D viewport editable motion trail for Blender 2.8x.

MotionTrail3D allows you to author arcs in 3D world space. The 3D-controls are normal Blender objects. They’re selectable and transformable through normal Blender means. As you modify the local channels, the 3D trail will also update in real time, even if the animation is playing.

To install the script, first unzip the folder. In Blender, Go to File > User Preferences , select Add-on Tab, then press Install Add-on and then select the python(.py) addon file. Enable it by selecting the checkbox. To enable it as default, press Save As Default. To create a trail, the button can be found in: 3D View -> (N) Tools Panel -> Animation -> Motion Trail 3D Panel

If you have any questions, comments, or feedback, you can email me at [email protected], reply here or PM me.

Note: I’ll be adding media and more information to this post throughout the next few weeks. I still need to create proper documentation and tutorials. Thank you for your patience and understanding. 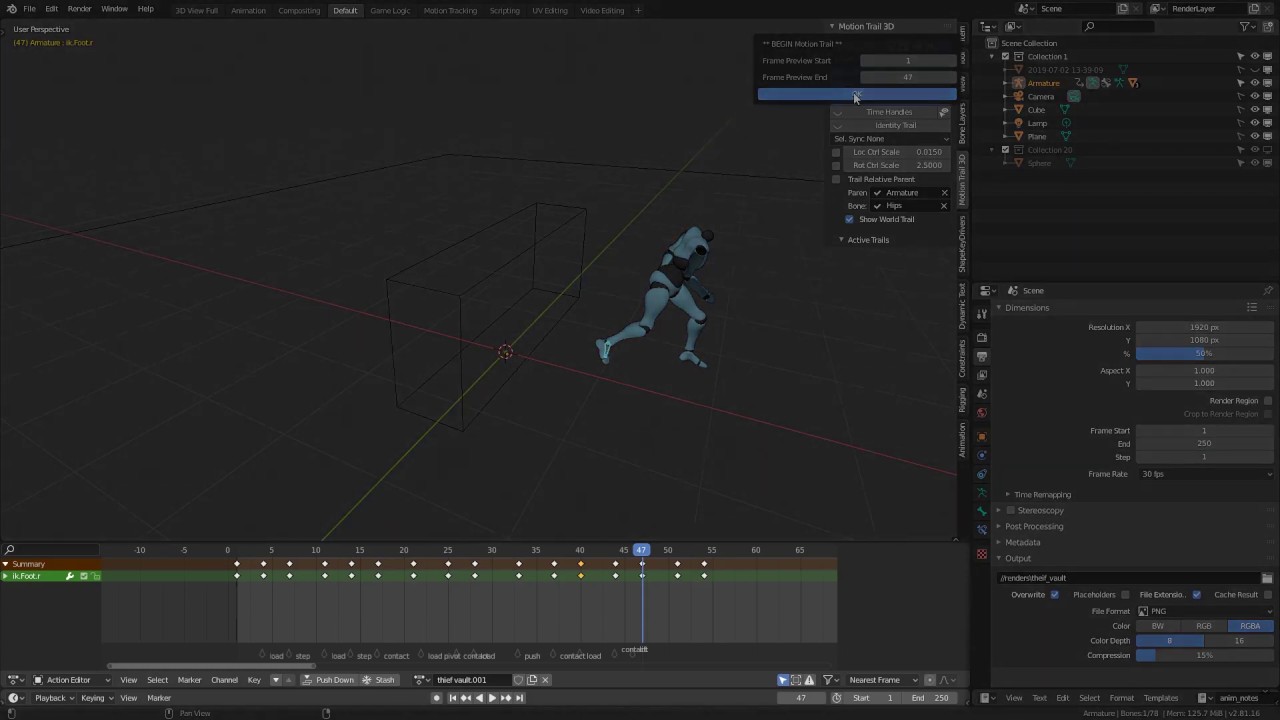 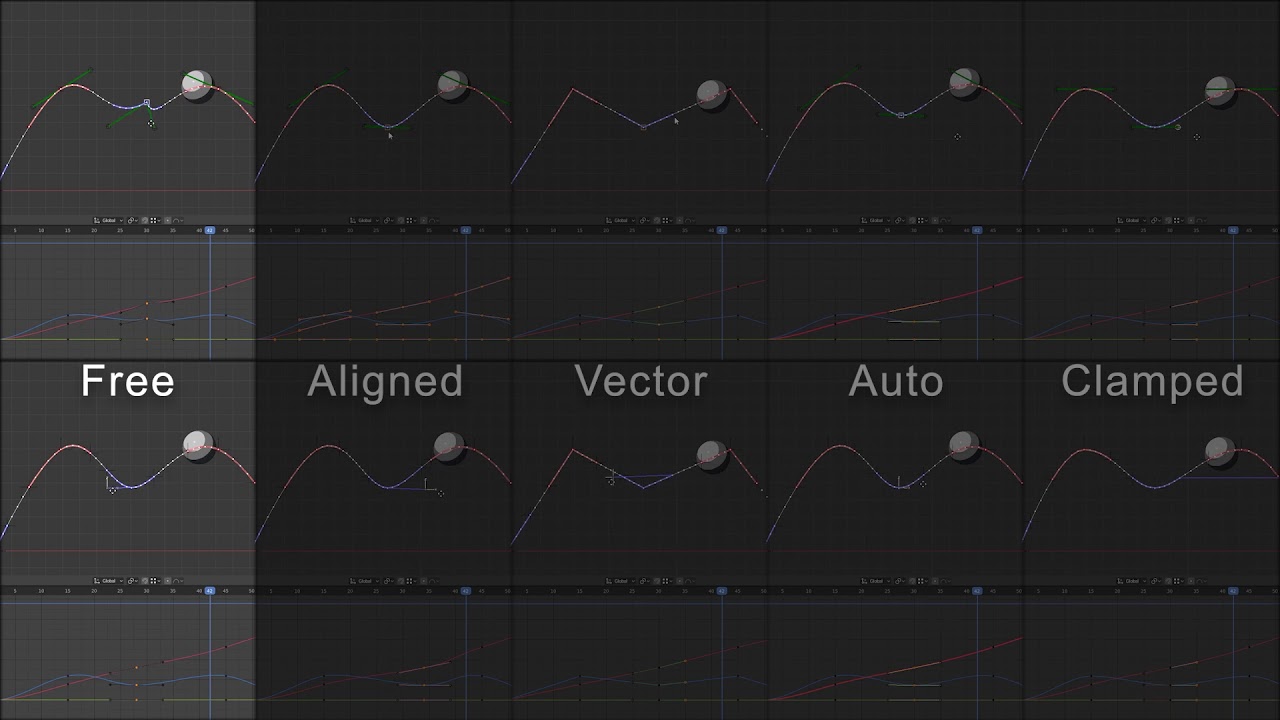 trackerpt3512×512 1.79 MB
Rotation controls! Track the orientation by creating 3 tracking points for the XYZ axes. Only Euler and Quaternion rotation modes are supported. Scaling the Quaternion controls will affect the interpolation through the key. Note: The rotation controls double as their own time controls. Dragging them screen left/right retimes them. These options prevent the written rotation from passing 180 degrees from the specified target. Extended allows you to rotate past 180 and isn’t relative to any particular key or handle. Timeline Frame will sample the rotation curves at the current frame for the 180 degree limit.
.
Relative parenting. You can choose which object or bone to view the trail relative to. Use this for camera-space editing!

camera_space1.gif512×512 4.45 MB
And last but not least, you can view the effect of FCurve modifiers. The addon samples the curve for the rendered points. Any modifier’s effect can been seen.

In the View3D Viewport Overlays menu, make sure Extras is checked.

Can select but can’t move controls?

Change the affected key’s interpolation type to Bezier and handle types to either Free or Aligned.

Based on each handle’s type, the behavior of the trail control changes. Handles of type Auto, Auto Clamped and Vector (linear) are automatically handled by Blender. The trail controls will snap back to their original position if you attempt to edit them.

Can select and move the controls but the trail doesn’t update?

Make sure the mode isn’t locked and then make sure you’re in Object Mode.

Controls are implemented as Blender objects.

To install the script, first unzip the folder. In Blender, Go to File > User Preferences , select Add-on Tab, then press Install Add-on and then select the appropriate python(.py) addon file. Enable it by selecting the checkbox. To enable it as default, press Save As Default. To create a trail, the button can be found in: 3D View -> UI Panel -> Tool -> Motion Trail 3D

Thank you for reading this far. Let me know what you think! If you have any questions, comments, or feedback, you can email me at [email protected], reply here or PM me.

Oh! That’s a super Christmas gift. Thank you very much.

Thanks for the support guys

Performance-wise, the dependencies are:

The addon has been out since around March 2019 and no one has mentioned performance problems. If you do find it too slow, let me know. Send me links to rigs you want me to test with, especially animated ones. It’s easier to optimize when I have concrete examples to check against and I’ll see what I can do.

I was in a car during all day long. I didn’t had the chance to try it.
I’ve a question… is there a way, or special mode to edit looping keys . I mean start and end frames at the same time. Or shall we do it as usual in graph editor.
I think not. But as I don’t have a computer in front of me… it was an idea.
Thx again for this addon.
I ll try also to combine it with free ik addon…

Currently there is no special support to do that. However, controls are normal Blender objects. You can multi-select trail controls to transform them together, even snap them together. If you think it’d be more convenient to have that built in, I can add support for it.

Oh! Using individual origin to rotate the tangents together is not something people do in an intuitive manner I think.
But perhaps I m wrong.
I was thinking more of a loop key declaration. That automatically pass the variables in a “ping pong” way.

Exactly what i mean. Wen you make a walk cycle. Climb run.etc… you are always looking for a non visible transition in between start and end.
I ll do that like that also. Perhaps it s not necessary.

When I made a walk cycle, the first and last keys are the same of course. But then you just remove the last frame from playing in the preview range to get the seemless loop. It also requires the key pair to have equal world-space tangents to ensure the speeds through both keys are the same.

For better context on the above animation: This looks very useful, thanks for developing. I will definitely buy it when a new animation job comes along.

Please keep us posted about updates.

I just bought it and have been using it for a few minutes in Blender 2.81a and so far is working really great. Fantastic addon, i really like it so far!!

Updated the main post with a new bugfix list and moved Caveats and Limitations to the very top. Please read them before you buy the addon. Notably, you can only have one trail active at a time. It’s been a while since I’ve considered this limitation. Give me some time and I’ll look into supporting multiple trails. If I do, consider that the limitation about modifying the parenting hierarchy and dependencies is unlikely to change.

In all honesty, it’s a bit sad to see core features like this monetized as addons, especially when the Blender devs are in the process of trying to implement them.

Please go away. This feature is not in Blender, this wonderful user spent countless hours of their time to work on it and is asking a pittance for it in return. Well worth the chump change I’d say.

Imo, they are piggybacking on countless hours of work done by volunteers who asked for nothing in return.

Blender devs are still able to implement their own core motion trail. I’d love if they do because my implementation isn’t the best and has it’s issues. They’d be able to make it more efficient, create more robust trail controls (mine uses Blender objects and has lots of code to compensate for this hack), and I hope they do things that are in my current list of Caveats and Limitations. I’m an animator who just happens to know how to code so I just made myself one.

As far as piggybacking, I understand the frustration. Bart Crouch’s older motion trail is the big one we all hoped would eventually get updated to 2.8x. You’re more than welcome to compare features of his and mine to see how much I could’ve copied from him. At best we only share the concept of creating a viewport motion trail. From what I understand, his implementation did not support pose bone animation and it did not actually render a world-space trail, just the local channels. These are two core things my trail offers that his does not. Correct me if I’m wrong. I’ll go check to verify these last two points.

Payment vs Free. If this was a one off thing where I upload the addon and leave without maintaining it, this addon would be free. But for as long as I’m going to publicly maintain a difficult code-base and work with people to add features everyone would like, I feel the need to be compensated. If you disagree, that’s alright.

Edit: I was wrong. Crouch’s implementation does work on pose bones and does render their world space trail, as long as the armature has an identity transform. Apologies for the misinformation.

Edit2:(Bart Crouch’s addon from August 27th 2017, can be found in Blender’s source. I just used the most recent version that wasn’t modified for 2.8x reasons. The armature has an identity transform.)

ex_bones512×512 359 KB
This is to show a simple case for his addon that doesn’t work for bones. Maybe it’s hindsight, but I’m curious why this was never fixed. The solution is to read the bone’s world matrix, strip off it’s local xform, and replace it with inv(stripped bone world matrix) * control world. That leads to the controls working as expected, moving with the mouse in world space.
4 Likes
The New Animation System 2020 : Character animation system
skuax (skuax) December 27, 2019, 12:14am #19

Contribute to Ikeiwa/Blender-Motion-Trails development by creating an account on GitHub.

Thanks for the link. For bones, it seems to crash. Looking at the code, one of the problems is that they call scene.frame_set from a draw callback resulting in an infinite loop. This worked fine pre Blender 2.8x. That didn’t fix the freeze but I know that’s one of the reasons. It happened in my script when I updated from 2.79b to 2.8x.

Comparing the code, the only significant update is that they updated the rendering. All the math appears the same so the above GIF problem would still happen.