This is an addon that allows the creation of fully skinned, unwrapped trees. You can find the previous thread here. You can download the latest version on the github repository here.

Here is an example: 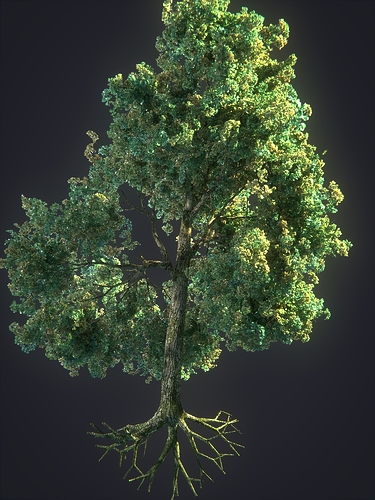 Have fun with it !

It looks awesome ! Thanks for sharing this great addon !

Ooh, a new version! And that roadmap looks great

Thank you, and Graphics_Dev, for the wonderful work on this addon. Hope to use it for my own project soon!

I have error after installed script (blender 2.77a downloaded from blender.org). I used “install from file” option. I don’t have other version of this addon installed. 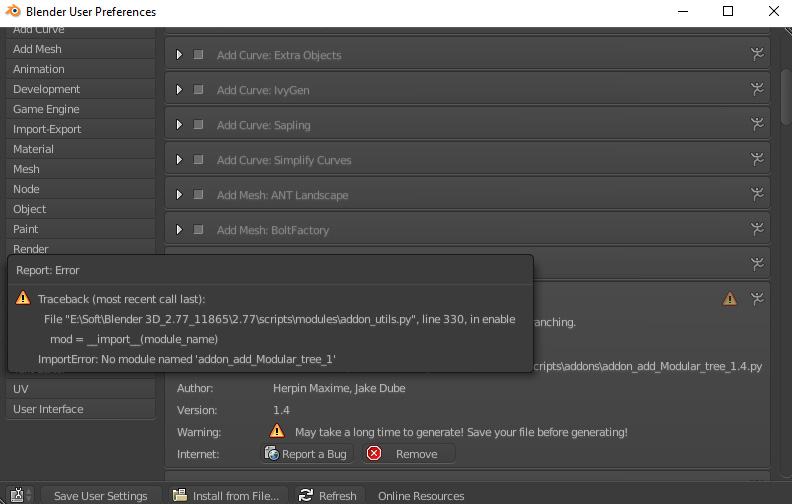 Could you follow the installation guidelines I wrote here: 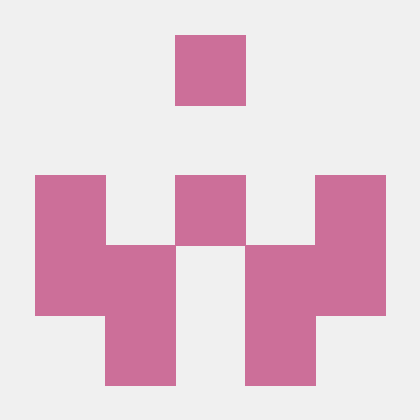 Contribute to modular_tree development by creating an account on GitHub.

I think you must have done something strange w/ the naming perhaps?

Let me know if this solves your problem.

If this doesn’t solve your problem, can you edit your post and add a screenshot of the system console (Window > Toggle system console)? Please expand the window so I can see as much of it as possible

Can you edit your post to link to the installation guidelines instead of the main file? I think it would be a bit less confusing for new users…:eek:

[ATTACH=CONFIG]450262[/ATTACH]
Took a minute or two to calculate. Afraid to even think about leaves XD

While Maxime is currently working to improve uv speed, make sure you don’t turn on uv unwrapping if it is already about to kill your system :spin:

Doing an unwrap on that many faces could take hours (slight exaggeration). :eek:

Also, beware of armatures, as they will take awhile.

Leaves, on the other hand, are actually comparatively fast because they are just particles. Maxime added a twig generation tool (in the Make Twig panel) that can make a nice mesh to setup in the particle system’s object field! I must say, it looks pretty cool.

Version 2.0 will greatly improve the unwrapping speed, and include an auto-saving feature so that you CAN mess around with high values AND not lose your work!

BTW if you are using windows os, you can do “Window > Toggle System Console” you can see what stage the add-on is in and see how long it took (provided you have V.1.4 or higher). If you are on linux or mac, you will need to run blender from the command line…more on that here.

Got to try it now

Got to try it now

The Twig generator gives really good looking branches. Would be great to add the generated twig automatically to the tree’s particle system or best to let the user choose the twig in your addon’s panel. It would allow to use custom hand-made twigs without going in the 1000 of options of the particle system. Some scale option near to it would also be helpfull as the default scale of 0.15 is really small for the twigs. And it would allow to keep those values after an update.

Some presets would also help to understand the different parameters and be like a starting tutorial to learn from. Your and Maxime’s work really bring Blender to another level of quality regarding tree generation!

@bliblubli Thanks for the input! I’ve added two issues for them…we’ll get around to it as soon as possible. Currently Maxime is fighting a strange bug with the twig’s unwrapping, but other than that V.2.0 is ready to go!

Version 2.0 is merged into master!

Maxime added an awesome “last unwrapped iteration” setting, and I added auto-saving of everything in your blender file (including images and texts).

You guys work at a blazing speed

Awesome, thanks a lot. Also would be nice to have some tutorial.
I not find leaves orientation to ground, from this you can decide is tree real or digital, it will be nice feature.

Thank you very much for this awesome add-on, it creates believable trees and let you edit them at any moment, it’s way faster than the Sapling add-on and much more feasible, great work!

If I may suggest, I would like to have options to create twigs with some different leave geometries, such as simple quads for distant trees so to save memory and render time, or even more detailed shaped leaf like, so to avoid alpha masks.

Thank you again, Maxime and Graphics_Dev!

I do not understand how the presets system works. I have seen that there is a prest in github, but I do not know where I should put the file so that it can be readed by the addon.

Edit:
Ok, just after writing the message I happened to look in Blender addons settings. There it is
Once a preset is saved the first time, a folder called ‘mod_tree_presets’ is created in Blender addons folder.

The preset is just my “blank” so to speak so it won’t do you much good to install as its mostly just the defaults. I will let Maxime make a few presets as I still haven’t spent too much time mastering the settings as I would if I was approaching it as an artist. That’s why I only said the functionality was done on github

You can read our ongoing discussion about it here:

To install a preset though, just open up the user prefs for the add-on and navigate to the preset with the file browser (you may have to disable relative path here). Then hit “Install Preset”. It should be in your list of presets now! 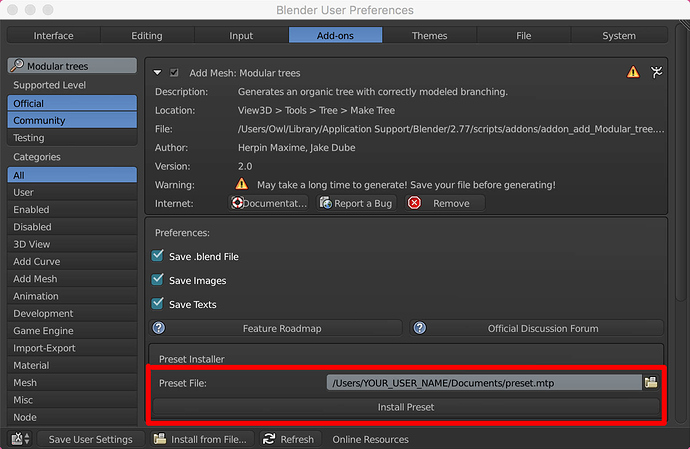 If you have your own presets, I just made an issue here where you can post them for everyone else to use/learn from. Be aware that this add-on is still under heavy development, and while I don’t see any major changes popping up soon, some presets may not work well with newer versions.

You guys work at a blazing speed

@BrilliantApe
Batch tree generation is done, you can download is from the develop branch, let me know if you want more control over it.

@Jakasan
I will make a tutorial soon. Unfortunately Blender does not allows me to control particle orientation with python, we can only hope that a developer will integrate it at some point.

@Sourvinos
Different leaf shapes would be a nice touch indeed, I will work on it !

To all of you: we really appreciate your ideas and feedback, and we feel rewarded by your enthusiasm !

@BrilliantApe
Batch tree generation is done, you can download is from the develop branch, let me know if you want more control over it.

Works like a charm (though 180 trees crashed Blender, lol)! First I thought random placement would be nice instead of the grid, but you´re going to place them manually anyway (the addon should focus on tree generation). Stellar work, Maxime. Let´s hope I have more time to play with it this weekend, all those settings to try out

Thank you both for your commitment and enthusiasm (and skill), you are great!

I think that a better placing for the mod_tree_presets could be in the “presets” folder inside the “scripts” folder where also the addons folder is located.

How do I use the twig feature? It only makes a single twig at the root of my tree object?