TexTools is a free addon for Blender with a collection of professional UV and Texture related tools. Back in 2009 I released the Original TexTools for 3dsMax. This is my first blender addon, more features will be added in the future. 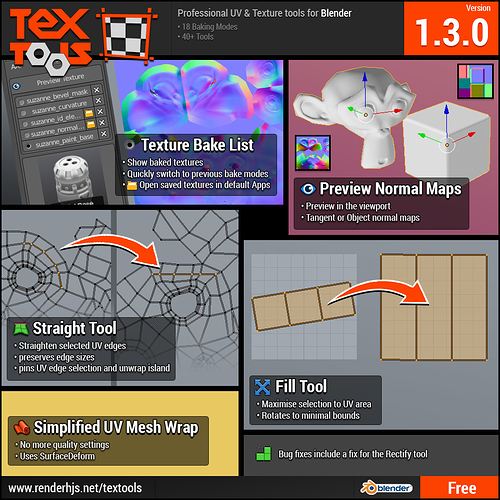 Quickly assign sizes in pixels for baking or related tools.

Iron Faces: A quick way of assigning faces to a single UV island

Anti Aliasing for any of the bake modes in TexTools

In this thread I will post development progress, collect feedback as well as release updates. Feedback is appreciated

62 Likes
UV issues Blender/Unity workflow
UV unwrapping
How to straighten a circular UV island
Add-ons question
How do you like Uv mapping in blender
The big favorite Blender add-ons thread
Tips & Tricks for UV Mapping props for the modern blender game artist
No edge loop issue with marking seams
Learning About Normal Baking, need some advice
Hard surface UV mapping tips? (2.79)
For Modo user switching to Blender 2.8
Seasoned character artist looking into migrating to Blender, lots of questions and/or suggestions
How do you move mirrored UVs exactly 1 unit in Blender?
[Input] Custom Blender Setup | ALT-Maya Navigation, LMB Selections | for blender 3.1
Open Cone Animation İn Blender 2.8
"Upgrade to 2.8x required" For addon
Textools add-on menu not showing in UV editor after I updated from 2.90 to 2.91
How can I unwrap UV and have the results automatically match the scale of my texture?
Addon suggestions for unmapping a curtain?
anon18318387 January 1, 2018, 9:18am 2

I have such fond memories of this addon, back when I was using max. I couldn’t conceive working in max’s uv editor without this toolset.

Seeing it here almost brings tears to my eyes

So let me first do something I never did back then - thank you for your work!

Secondly, welcome! I hope you’re enjoying blender as much as we are. I don’t know if you’re still using max, I personally stopped using it some years ago and never looked back, but I’m sure blender will win you over completely, if it hasn’t already.

We have some other great uv editor toolsets in development on these forums (check out Nutti’s Magic UV, if you haven’t) and seeing yours here is great news. Your addon certainly has some unique and very useful features.

Wow some nice Uv Tools! Thank you!
Can we except the other tolls that are in textools in MAx?

I dont find the " mirror tool " that showed in manual in panel . Do i miss some steps to make it visible ? My Textools is 0.3.0!

Sorry for my English

I’m still using TexTools for 3ds max 2014. Thank you for that tool.
And I could not believe that TexTools would appear for Blender.
This is the best gift for the New Year.
Will you create something like similar tools for 3ds max TexTools? Or we can expect from you create other additional tools that are not in Blender?
You use icon + text, I think it’s good solution.
Thank you!

@mem: Thank you,
yes there are still many 3D artists out there using TexTools for their daily work in 3dsMax. Yes I do enjoy blender once I forced myself to finally learn it seriously

.For me back then TexTools and maxscript was always something I can take with me as I always had 3dsmax available to me (uni, work, home,…). Having a drag and drop script that doesn’t require admin rights and installs very quickly was a very important expierence to me.

Blender steps this up a bit, at my current work Blender allows me to just take it to work and just use it in the pipeline process because its free and multi platform. Creating pipelines and integrating tools or people is what I am passionate about. This is where TexTools comes in again: Having it free and quick to install / use is important to me.

Yes I have seen pretty much everything that’s out there addon wise for blender and UV’s. I personally use ‘Multi Object UV Editing’ and ‘UV Squares’ but most of the addons out there are simple or not context sensitive. I need more of a suite. Also I am very picky when it comes to UI and expierence.

@tungee:
Yes many other former tools are in the process of being translated to blender and python. In particular I want:

@wuren:
Regarding the mirror Tool: That’s because it is very buggy at the moment. I will enable it in the UI when it is more stable.

@so3Datel:
I will defenitly transfer many tools and ideas, but not all of them make sense for Blender. Others like the baking modes I would like to improve and refine.

Currently I planned: AO, Cavity, Dust, gradient Z, ID, Normal and Worn. The idea is to keep them as few simple ideas and then tweak and improve each shader over time.
Currently in the code I actually load a material from a nested blend file in the plugin folder, this makes it very easy to tweak and adjust the shaders over time and with each release.

Thank you very much for making this, I’ve been waiting for it since you announced it will be coming to blender!

Could this be possible to add in textool? It color codes all islands with their current status (flipped, overlapped, etc) super useful imo.

Wow, that’s just gorgeous news!
I started using 3dsmax in 2003, and quit in 2011, so I remember TexTools very good. That was just magic))
Mostly, that was incredible way for quad retopology, that still uses to fill complex surfaces with patterns.

Much later, same solution was providden by Rich Colburn, in his Surface Follow script. Even Max Puliero checked it up)

I has come to Blender development in 2012, started F2 addon with Bartius Crouch, and modeled with it a whole turbosquid account, then started to order and support 1D_Scripts and Bargool 1D tools - mostly cad toolsets for B3D, and found, that UV section of development is kind a dark zone)

However, last three years UV features in Blender was growing, and I guess, some titels/names/code solutions will be interesting to you) Here they are:

So, thank you so much for bringing live legend to us!
By the way, I’ve spotted donate button, is it still active?)

Thank you too for making that and also for sharing it

Thanks a lot again

SOOOO nice to see you here!!!
I used Tex Tools daily back in my Max days

oO … wow
For your first addon in Blender, you sure put the bar quite high. Nicely done, amazing addon. Thank you for sharing !

holy moly!
thank you very much.

OMG, i love using textools when using Max 2011 (and your art too). Thanks you so much

Thanks for the warm welcome, Blender has indeed an awesome community!

I actually made much quicker progress with the baking tools and I am happy to release the next update. There are a few bugs that I am aware of right now such as the Checkermap script only working in the ‘Blender Render’ mode. They will be fixed in time.

Under the hood it automatically groups your object selection by common names and object type prefixes such as ‘low’, ‘lowpoly’, ‘high’ or ‘cage’ but it also checks for subdevision modifiers for example to determine high poly objects. It previews all of these sets in realtime in the inspector so you always know how many low poly, high poly or cage objects you have in a set. 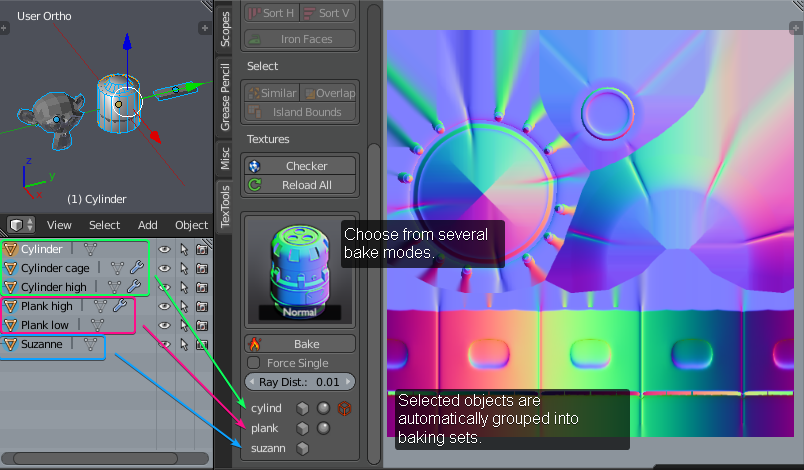 But you can also force all selected objects to be baked into a single texture (no clear texture), which is great for exploded bake setups. Read the documentation for more detailed information on how names are split etc. or select individual objects and see their object type in the TexTools inspector.

Updated Documentation
Read at GIT repository
Covering the new baking tools in more depth as well as developer notes for running the source version of TexTools or enabling the developer mode in TexTools. When I have some more time tomorrow or the weekend I will upload a video to demo the current features of TexTools for Blender.

@fiendish55: Regarding displays for flipped UV’s and overlapping ones: I noticed that Nutti already implemented the other day something like that for Magic UV. Personally I don’t like starting a mode in order to run in realtime a overlay in the UV editor. I am thinking instead of having tools to select flipped faces instead, just like the select overlapping islands as it will feel more natural inside Blender.

@1D_Inc: Thank you for your generous donation from the other day!, that made my day.

Yeah the UV to XYZ swap was very nice and unique. It was a lot easier in 3dsMax because of the way 3dsMax handles the buffers for the vertex, face, uv,… data, you could literally swap them around. In Blender there are now UVW coordinates, but just UV. There are also some other challenges in Blender which is why the swap UVW to XYZ is not yet done. I was also thinking of using shape keys to transition back and forth but still have to brain storm for some other ideas to store the missing data in the UV.

Yeah I am aware of most of the other tools out there: Been looking a lot at their code and learning from them. Some texel density tools will come in the future to TexTools for sure.

And yes the donate button still works, I added the donate link to the README.md and the addon itself so thanks for reminding me.

@dsimovski: Thanks, yeah still used it this year at my previous work place. Mostly showing other 3D artists how to speed up their workflow with UV and texturing.

@didli: Thanks, I actually started learning Blender about 3 months ago. At my current work I started some of my first python scripts in Blender: Exporting tools and pipeline for the Unity game engine. Luckily there are already some great open UV scripts out there where I could learn from.

renderhjs, thanks you very much, good to see new update

little feedback
For me it works only AO and gradient backing, NM is bake gray image with barely visible colors, other baking mods give errors

I do not know, maybe this problem is only for me
sorry for my English

so3Datel: I have noticed that the normal baking is broken with the nightly builds. Test the official 2.79, it works for me.